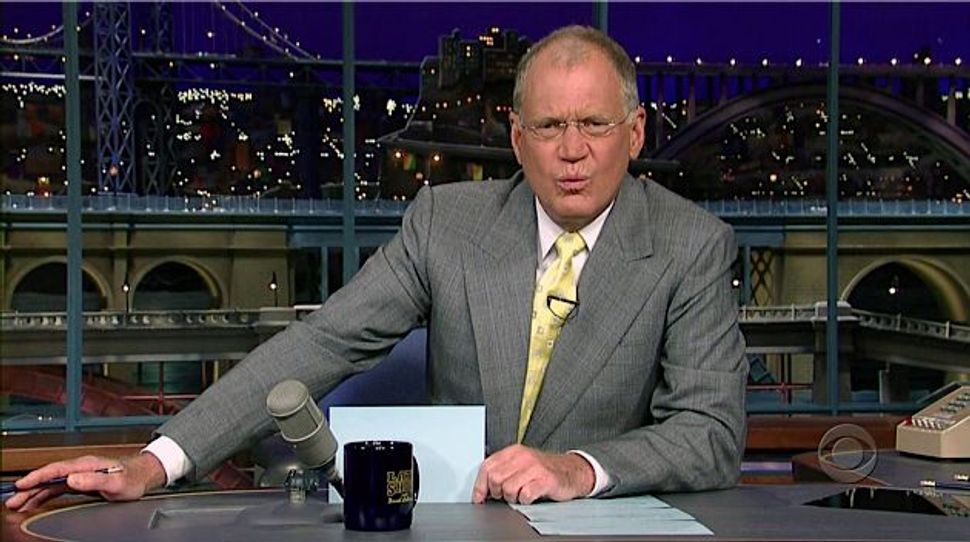 “If you need help, here I am” is an idiotic phrase intoned by Renée Zellweger in the movie “Cold Mountain.” In February 2004, David Letterman played the trailer on his show and became obsessed by its melodrama and its sound. For weeks after he would repeat, “If you need help, here I am.” Sometimes he played an audio clip of Renée. Usually he just said it several times in a row and laughed to himself. Maybe the studio audience laughed too. Maybe the audience cringed. First time viewers of “The Late Show” could only reach one conclusion: David Letterman was insane.

But that other people want to host a late night television show doesn’t make Letterman — or them — any less deranged. It only means that we’re suffering through a mass psychosis.

David Letterman repeats lines like “If you need help, here I am,” because he has to. The job of host is too demanding. The burden of coming up with new material is too unbearable. The host needs to be able to make comedy out of nothing. The host needs to know that if you repeat something enough times, the effect goes from uncomfortable, to painful, to delirious.

But Letterman also repeats lines because of his aesthetic vision. A late night host needs to see the idiocy, the strange, and the stupid in what the rest of us find normal. Great comedians make us laugh by revealing how the world really works. Seinfeld’s observational humor, Dave Chapelle’s race comedy, David Letterman’s absurdism: all of these prove that the structures of ordinary life are ridiculous.

Take this classic skit, “Can A Guy in a Bear Suit Hail a Cab?” Traditional sketch comedy often begins with a premise: a two or three sentence description of what’s about to take place, a core funny idea. Example: a genius businessman has the body and mannerisms of a baby. A Bar Mitzvah boy can only interact with an interviewer by reading from his prepared sermon. The joke is already there in the articulation.

“Can a Guy in a Bear Suit Hail a Cab?” reverses the equation. Dave takes an unfunny premise and extracts the ineffable silliness in human existence. We watch the titular Guy in a Bear suit fail to hail cab after cab while Dave narrates. Why can’t he find the cab? Is it because he’s not aggressive enough? What unwritten rule of social conduct forbids cab after cab from stopping? Eventually, just as Dave is moving to commercial, the Guy in a Bear suit hails a cab and the audience explodes. Finally an answer to the question that nobody asked!

It’s an incredible moment, though the high point of the sketch actually came at the beginning when the Guy in the Bear suit stood, waiting, while no cars passed. For close to a minute of television the road was still. You could wait your whole life waiting to see a traffic-less 5:45 p.m. on Broadway in Midtown … Dave took it in stride, and, without missing a beat: “For some reason there’s no traffic in Manhattan tonight. Perhaps trouble in one of the tunnels.” Perfect fake explanation, perfect local news tones.

This is what the “Late Show” was like during its first eight or nine years. It’s a pale reflection, I’m told, of the surreal “Late Night with David Letterman.” But I only know “Late Night” from clips of “Elevator Races” uploaded to YouTube and from reruns on E! and other cable channels. My Dave, the one who shaped much of how I see the world, is the one who hosted the “Late Show,” the one whose first episode I accidentally saw in the summer of 1993, the one who started as an iconoclast with a chip on his shoulder, mellowed, became a father, and started to care about his interviews. (As a longtime Letterman fan, nothing is weirder than the fact that the interviews became the best part of the show.) That David Letterman is also a genius.

Now we know that the next host of “The Late Show” will be Stephen Colbert. For night after night, week after week, year after year, Colbert has played a faux-conservative news anchor. He’ll retire the character when he takes over for Letterman, he will kill the thing that made him famous. It’s the type of crime only a crazy person commits.