On April 20, a glorious, sunny day, more than 100 gathered at Der Shteyn — “The Stone” Memorial to the Warsaw Ghetto Uprising at Manhattan’s Riverside Park and 83rd Street.

Organized by the Congress for Jewish Culture, Jewish Labor Committee, Workmen’s Circle and Jewish Labor Bund, it marked the 71st anniversary of the Ghetto Uprising and the April 19, 1943 first Passover Seder during which the Nazis began their final liquidation of the ghetto.

In impeccable Yiddish, 94-years-young Majus Nowogrodski declared: “The ghetto fighters did not come from heaven nor did the Ghetto Uprising arise from a vacuum. It was an outgrowth of the hopes of Yiddish youths in wretched conditions, in cellars and attics, who became citizens of the civilized world…. Not only do we need to remember those who fought with weapons…but also those who created theatre for children in the ghetto…produced weapons for the fighters.” 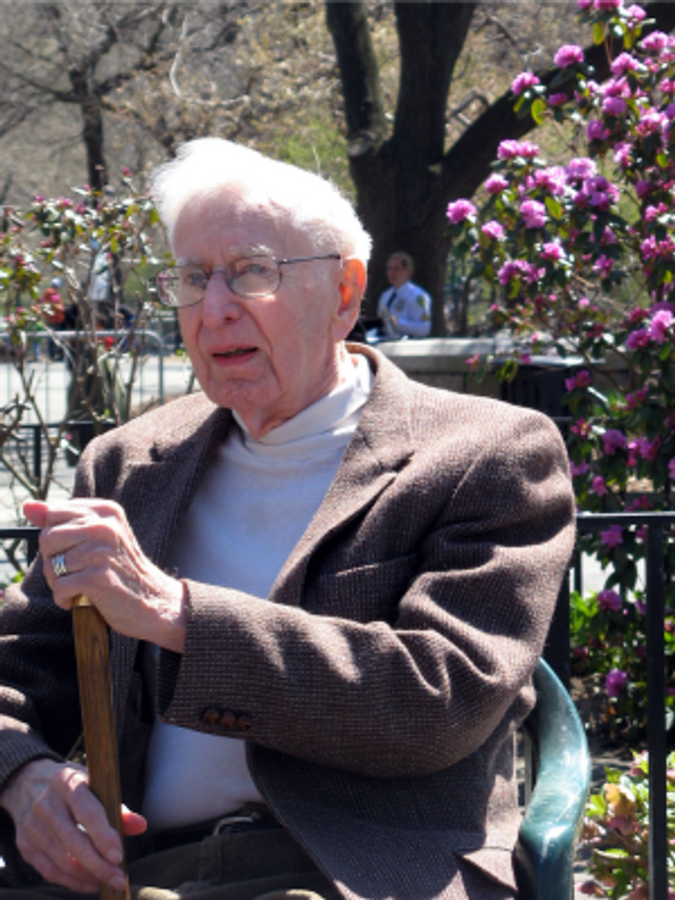 He recalled Dr. Leon Feiner, “who lived in Warsaw with false papers and as a member of the Polish Underground sent secret dispatches to London and New York—dispatches still languishing in some archive awaiting publication.” Nowogrodski’s father was Emanuel Nowogrodski, a leading Bundist and the editor of the newspaper “Die Folkstzeitung” in Warsaw where — after school — I would visit my father [Matvey Bernsztejn] who worked there.

Speaking in English, George Alexander, born in 1925, a survivor of Krakow-Plaszow (a landscape featured in Spielberg’s “Schindler’s List”) recalled how as a 15-year old he managed to get a job outside the ghetto repairing German boots. “Once a week someone from the [Polish] underground provided us with secret newspapers, news of Nazi terrorist attacks…I became a courier.” Surviving concentration camps “in Austria, Matthausen and others…by May 1945 — undernourished, overworked — I was contemplating suicide. There is something about suicide,” mused Alexander. “You have to have the strength and will…and I did not have it. Lying sick, in my last minutes, I saw through the trees a gray tank with an American flag. A miracle happened! I realized that the war ended for me…in that one minute, I regained my willpower to fight for my life.”

In his welcoming address, Kshensky informed that “Der Shteyn — The Stone” was a temporary marker placed in 1947 as a promise of a permanent tribute to be “built later.” Everyone stood and joined in singing the “Partizaner Lid” (Hymn of the Partisans) and those — old enough — sang in Yiddish “ Di Bundishe Shvueh” (The Anthem of the Jewish Labor Bund).