Comedian Tales — It’s All in the Timing 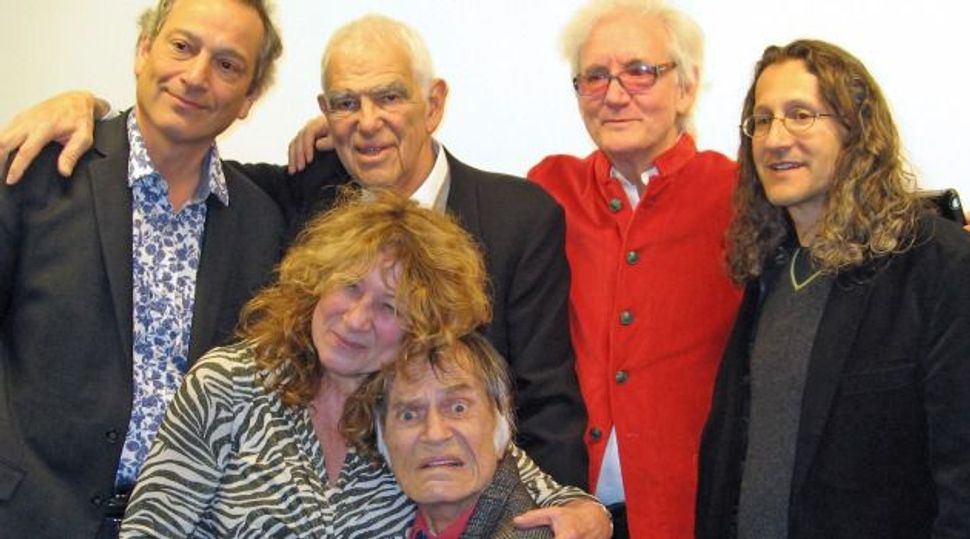 It was all about tale telling at the Society of Illustrators’ “From the Borscht Belt to Seinfeld: The Evolution of Jewish American Comedy.”

“Good evening boys and girls,” Storch greeted the roomful of fans. Experiencing a few punch line lapses, a befuddled Storch sat down, but no sooner did someone else claim the mic, Storch jumped out of his chair, commandeered the mic and completed his narrative.

Storch, who served with Tony Curtis on a U.S. submarine tender in 1944, recalled: “He told me ‘I’m going to be a great actor one day’ and I told him ‘you’re a good looking kid, why not model some clothes?’ Tony said, ‘No! No! No! Don’t try to stop me! ‘ I told him when the war is over, ‘if you need any help, call me.’ So the war is over and he becomes TONY CURTIS! and I am struggling in dives. I call Tony and in a Russian accent ask, ’Do you need a Russian for a new play or picture? I speak Russian…. Tony Curtis was my life-saver and I never forgot it.”

Bill Persky — whose sister married Paul Grossinger the same month that Grace Kelly married Prince Rainier, joked: “My sister did a lot better— the food was better and Grossinger’s was larger than Monaco.”

Persky recalled directing Jan Murray in a movie when the stand-up comic became a grandfather. “Jan didn’t want anyone to know it because he thought it would hurt his career and told everyone ‘I don’ want this out, I have an audition tomorrow for a movie.’ He goes to the audition and the producer says: ‘Jan…I thought you were older!’ So Jan chimed in, ‘Are you kidding? I’m a grandfather!’”

Later, I told Persky about my Jan Murray encounter. For my 1983, annual Forward “Catskills Chronicles” column, I chose Brickman’s, aka the “Catskills’ Citadel of Comedians.” Ringside in the 800-seat nightclub, I wrote in my pad: “tanned face, trim, gleaming white hair.” An angry Murray walks over, hovers above my table: “No one writes down my jokes! What have we got here?” he reaches for my pad. “What’s this: ‘ Red shirt, white pants, black jacket?’ Are you with “Womens’ Wear Daily?”

Total silence in the room. “I’m with the Forward. The Forverts.”

He put the pad on the piano, about to start — the nightmare of every stand-up — lost the rhythm of his routine and begins pacing the stage. “Look what that Forverts lady did he to me!” he bellows. After a few minutes of ad-libbing, Murray was back on track. Years later when he’d spot me at a Catskill hotel, he’d introduce me to his entourage with:” Let me tell you what this Forverts lady did to me!”

Comedian Tales — It’s All in the Timing