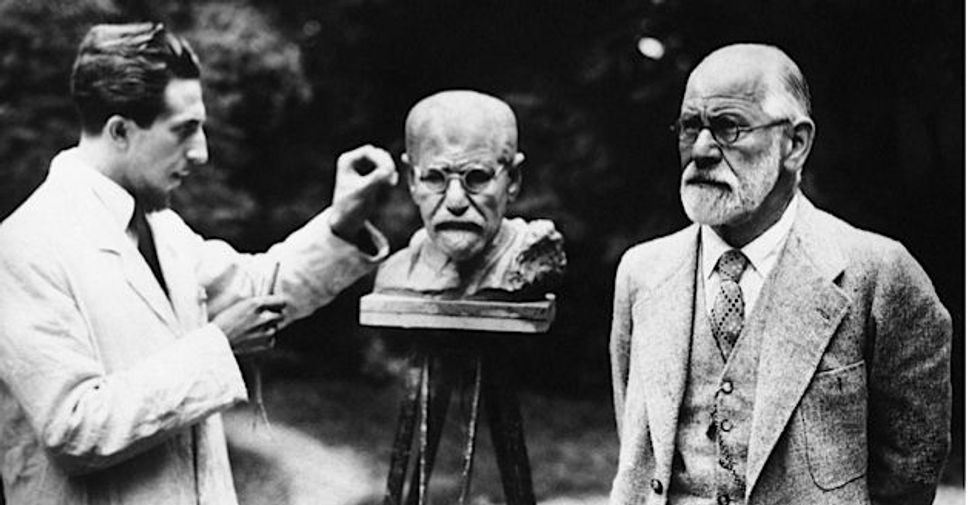 Sigmund Freud did not like sitting for portraits. The results, he claimed, never justified the time he was forced to remain idle. But his devotees wanted to see the great man immortalized, the more urgently as Freud aged. In 1931, with Freud approaching his 75th birthday, Paul Federn, a physician and analyst friend, convinced him to see sculptor Oscar Nemon, a 25-year-old Croatian Jew.

None of Nemon’s subsequent representations of Freud — nor any full-sized statues of Freud, period — can be found in the city where he lived and worked for most of his life. But on June 6, Nemon’s daughter, Lady Aurelia Young, will give an illustrated talk, “Oscar Nemon: My Father and Freud,” at Vienna’s Sigmund Freud Museum, followed by a concert of music from Freud’s Vienna.

The match didn’t begin promisingly. Nemon, who had been telegraphed by Federn to rush over from Brussels to Freud’s summer home outside Vienna, initially got a brush-off. After Freud reluctantly agreed to let him make a few quick sketches, Nemon’s only pencil broke before he could capture his subject’s beard. The following morning, when Nemon returned with a clay representation, his taxi made a sharp turn into Freud’s driveway, causing the bust to fall on its nose.

But it turned out to be the start of a beautiful friendship. In a letter to Max Eitingon, a physician and analyst in Freud’s inner circle, Freud wrote: “The head, which the gaunt, goatee-bearded artist has fashioned from the dirt — like the good Lord — is very good and an astonishingly life-like impression of me.”

Nemon, who had long admired Freud, became a welcome visitor to his home. His subsequent clients from among Freud’s disciples included Princess Marie Bonaparte, who was instrumental in getting Freud and his family out of Vienna after the 1938 Nazi annexation of Austria.

And it was at a London party thrown by Freud biographer Ernest Jones that Nemon met his wife-to-be, Patricia Villiers-Stuart; the English debutante and heiress was in analysis with Jones. As their daughter Aurelia describes the meeting of Nemon and her mother, “He looked straight at her, as was his wont as an artist, and listened to her… She fell completely in love with him.” This complicated his life, to say the least: He was already living with another London socialite.

It also complicated life for the rebellious Villiers-Stuart. Her wealthy parents not only swore to disinherit her, but also tried to get Nemon deported — this, in 1939, when it was becoming increasingly difficult for European Jews to find safe haven from the Nazis. Nemon’s mother, brother, grandmother and several other family members were later killed in Auschwitz.

Nemon managed to stay in London. It helped that he had by then sculpted some of the most influential people in the U.S. and Europe besides Freud, from Charles Lindbergh to Queen Astrid of Belgium. He went on to get commissions from England’s most powerful people, including Queen Elizabeth II and Field Marshall Montgomery. It is considered lucky to rub the left foot of Nemon’s monumental statue of Winston Churchill, which resides in the House of Commons. When Nemon died, in 1985, he was sculpting Princess Diana.

In spite of these accomplishments, Nemon was never allowed to enter his in-laws’ home.

Six months after Freud’s initial sitting with Nemon, the members of the Viennese Psychoanalytic Society were presented with three busts, one in wood, one in stone, and one in bronze. It was left up to Freud to decide which he wanted for a gift.

He wrote to the Society in November 1931:

The choice was not an easy one … Finally, since however, I cannot have three heads like Cerberus I decided in favor of the one made in wood. With its vivacious and friendly expression, it promises to become a pleasant roommate.

Subsequent photographs of Freud in his study show his wooden doppelganger perched on a pedestal behind his desk. The bust traveled with the rest of Freud’s possessions to the home in Hampstead, London — now London’s Freud Museum — where the family fled from Vienna in June 1938.

Before Freud’s death, less than a year later, Nemon finished the sketch for a full-body statue, seated with knees characteristically splayed. You can see a larger-than-life version outside London’s Tavistock Institute; smaller maquettes reside in the New York and Boston psychoanalytic institutes.