Doug Liman on Action Movies and Shabbat With Dad 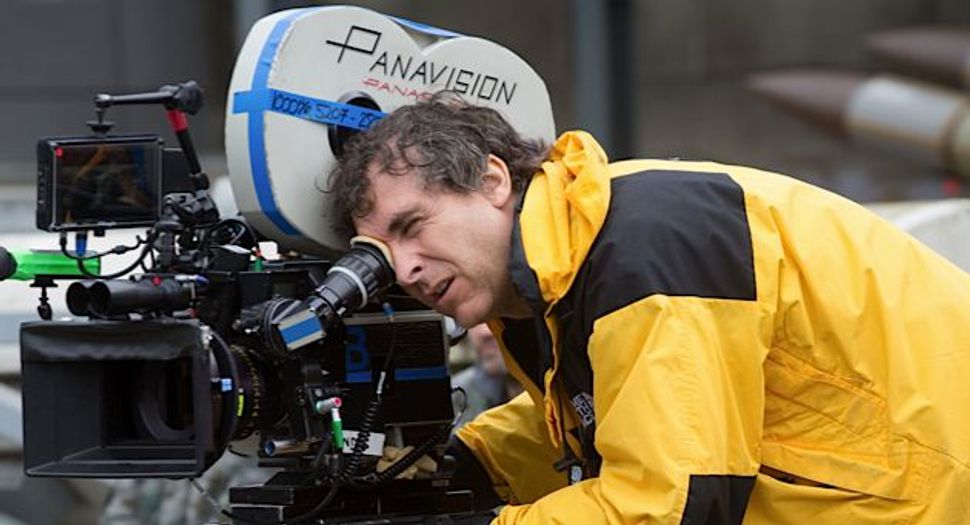 Doug Liman made his reputation directing “Swingers,” a film that helped establish the viability of independent film, not to mention the careers of Vince Vaughn and Jon Favreau. His personal favorite is “Go,” a movie he knows “no one saw.”

But certainly Liman is best known as an action director: “Bourne Identity,” “Mr. & Mrs. Smith” and now, “Edge of Tomorrow.”

The movie stars Tom Cruise and Emily Blunt and is already the best reviewed of Liman’s films; it will restore luster to Cruise’s career, tarnished recently by “Oblivion,” “Rock of Ages” and “Knight and Day.”

Liman grew up in Manhattan, the son of Arthur Liman, who led the Iran Contra investigation. Liman spoke to the Forward about the art of making action movies, what Cruise is really like, and how Shabbat dinners with his dad prepared him for Hollywood.

Curt Schleier: Is there a secret to making action films?

Doug Liman: It is not getting lost in the magnitude of the movie and forgetting that the reason we go see movies is for great characters and great stories. Because a movie like “Edge of Tomorrow” is so huge and complex, the spectacle and action is all-consuming, and that on its own is enough of a reason for a lot of people to see it. But if you make movies for adults and you hope people will watch it in 20 years the way people are all watching “Swingers” now, you have to have great characters and great stories. The most cutting edge visual effects movie today is going to look quaint in 20 years.

In “Edge of Tomorrow,” Tom Cruise dies repeatedly only to re-awake and relive the same day and in theory learn from his mistakes. It sounds a lot like “Groundhog Day.” Was that a concern of yours?

If someone can watch a summer blockbuster and what comes to mind is a brilliant comedy, I don’t mind that. When I read the script and my friends asked me what I was working on, I would sum it up myself as, “imagine “Groundhog Day” as an action movie. But I think we took the concept a lot further on a lot of levels. In “Groundhog Day,” the character played by Andie MacDowell had no possibility of understanding the device [of re-living every day]. Here, Rita [Blunt] doesn’t have the power, but understands [what’s going on]. I like strong female characters. We’ve all seen films where the hero has super powers. But here, Rita has no super powers, only her intelligence. She is the actual heroine of the movie, not Tom Cruise.

You’ve been quoted as saying that chaos is good. Why?

We’re in a creative profession. We’re not manufacturing widgets. In manufacturing widgets, order and structure is the name of the game. I don’t believe in making movies that way. I want to create something fresher and newer, and for me part of the process is chaos. Creating something new by definition is finding it and figuring something out. We may come to the set with a plan for the day and we’re likely to throw it out. I’m constantly on the lookout for something better, and if it comes along I’m going to seize it. Whatever plan you have is going to be rooted in the past.

Your sets have been described as turbulent. Looking back, is there anything you’d change?

When you have a lot of people involved, changing direction doesn’t create the smoothest environment. In the case of “Edge of Tomorrow,” Warner Brothers said we want to make an original action movie and we want your signature on it. We know what we’re getting into. With “Bourne,” I was constantly fighting [with the producers]. There was outright chaos; a fire burning out of control. The producers didn’t understand my process. What would I have done differently? I would have hired different producers. Though the film came out magical, maybe because of my fighting with the producers. Maybe some of that ended up on screen; Matt Damon against the system. If I’d hired younger, hipper producers, maybe the film wouldn’t have been as good.

I think, Scientology aside, the general perception is that Tom Cruise is a kind, generous and supportive actor. Here’s your chance. Tell us the truth and don’t spare any details.

The truth is that what you’ve just described is an understatement. I read the press. I went into the movie thinking he can’t really be as good as they say he is. People just say that for the media. He can’t be that hard working, kind and considerate. But that’s what he’s really like. We worked together two years and I spent two years waiting for the other shoe to drop. It never happened. We had a shoot scheduled for 8 a.m. and he showed up at a quarter to eight. Normally you set up a shoot and then you call for the star. That’s one of the trappings of being a star. Everyone gets ready and you wait for the star to amble on the set like a king. I’d say ”let’s call for Tom Cruise” but he’d be there.

Can you talk a little about your upbringing?

I grew up in New York City and went to private schools. My father was a prominent lawyer. I think the values he instilled in me have served me well, particularly in Hollywood. It’s the reason I didn’t end up some spoiled, rotten kid. We had a Shabbat dinner every Friday evening. Dad ran the Iran Contra investigation. He was often off doing big exciting cases. But he was always home Friday nights. Friday night dinner was sacred. I still go to the same synagogue we went to. I still sit in the same seats that I sat in with my parents. On my father’s yartzeit, on the high holidays, I’m in the same seats and everyone else is sitting in the same seats. It’s when I get out of the rat race for the moment and have an opportunity to reflect. The traditions have given me a perspective so I didn’t get lost out there.

Doug Liman on Action Movies and Shabbat With Dad