Learning the Wrong Lessons From the Rosenbergs 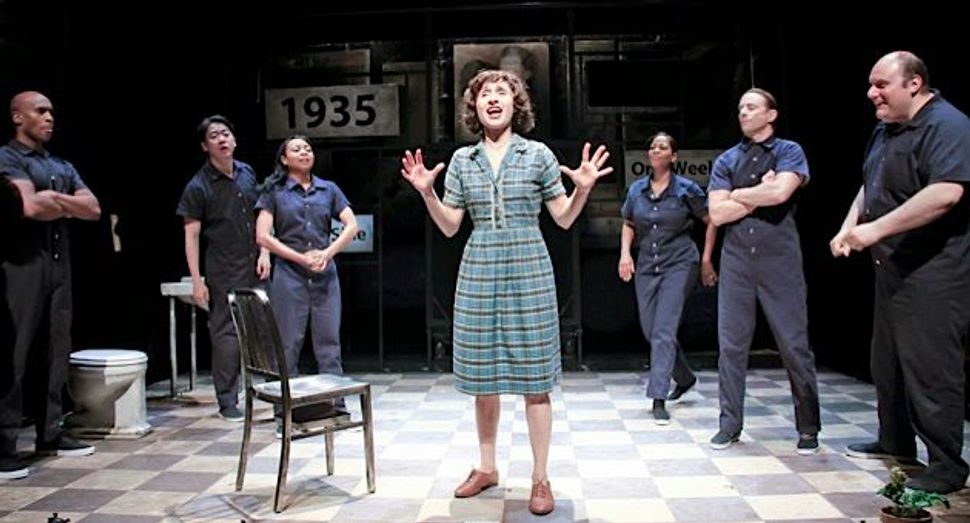 There are lessons to be learned from “Ethel Sings,” the new play about the Rosenbergs running through mid-July in Manhattan.

The most obvious is about the dangers of governmental overreach. Also: less is more. And both playwright Joan Beber and director Will Pomerantz would do well to learn that.

“Ethel Sings” is a potentially powerful story burdened by totally unnecessary over writing and directing. It’s been a little over six decades since the couple were executed, but much of their story remains hauntingly familiar.

Ethel (Tracy Michailidis) and Julius (Ari Butler) meet at a Young Communist League. She wants to become a singer; he wants to change the world. In a country where anti-Semitism and racism flourish, he sees communism as a beacon of hope.

Ethel is less enthralled with politics and concerned that her husband’s affiliation keeps getting him fired. She urges him to quit the Party.

The government discovers secrets have been passed and is relentless in its pursuit of the Rosenbergs, coercing Ethel’s brother and sister-in-law to testify against her in exchange for lighter sentences.

While it appears that Julius did spy for the Soviets, the drawings he passed on were apparently inaccurate and of little value. But Ethel seemed innocent.

More to the point, anti-Communist hysteria and anti-Semitism had as much to do with the conviction (after a brief two-week trial) and severe sentence as any crime they might have committed.

Beber and Pomerantz intended to be the canary in the mine shaft, warning how dangerously close we are to repeating our mistakes in the post-9/11 era.

However, they muddle things up. Ethel has a spirit guide (Adrienne C. Moore). “Who are you,” Ethel asks. “I’m whoever you want me to be,” the guide responds, subsequently asking Rosenberg if she’d ever seen “A Raisin in the Sun,” a play first produced six years after she died.

Ethel’s mom (Tanesha Gary) is played by a black woman using a Yiddish accent usually spouted by comics telling Jewish jokes. I have no major opinion about color-blind casting one way or the other, but the accent is a major distraction.

And it’s not the only one. At a couple of points in the production the cast sings and dances in a way that I’m certain is intended as symbolism. It’s usually helpful though if the audience can figure out what it is symbolic of.

This reminded a little of Alan Cumming’s recent Broadway production of “Macbeth,” a virtual one-man show where he played all the major characters and had Macbeth confined to a mental institution. I kept wondering why Shakespeare wasn’t good enough for him.

Here, too, it seems as though layers were added to an already dramatic story for no other reason than to add layers.

Learning the Wrong Lessons From the Rosenbergs