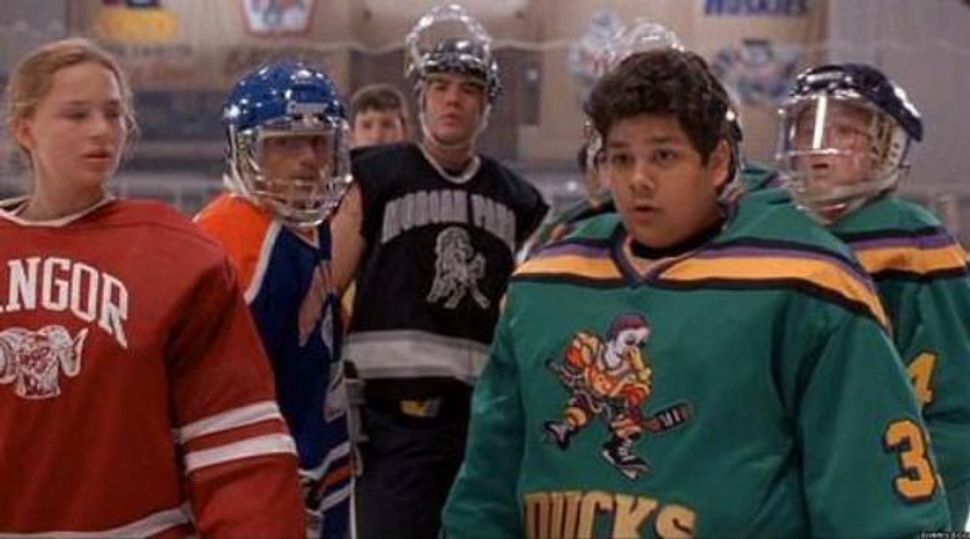 (JTA) — If you feel Disney’s “The Mighty Ducks” trilogy could have ended better, you’re not alone.

Producer Jordan Kerner recently told Time that part of his original plot line for D3 — the Ducks failing to defend their title at the international Goodwill Games — would have featured an off-the-ice fight triggered by an anti-Semitic comment directed at Ducks’ Jewish goalie Greg Goldberg:

…we were going to use — and please forgive me, Bulgaria — we were going to use the Bulgarian team that would say something off-color to Goldberg, and could be anti-Semitic possibly — making fun of a guy named Goldberg — and fun of a guy like who’s a little bigger than the average guy on the ice. Then a fight would ensue and in that room was also the Icelandic team who hated the Ducks. And rather than having them sort of look and chuckle, they got involved, and they helped Goldberg. Then the Ducks lose to Iceland in the semi-finals.

According to Kerner, the rest of the film focuses on Coach Gordon Bombay beseeching the Ducks to bury the hatchet with Iceland and ends with the team members helping their erstwhile rivals train for the title.

Of course, the plot line was scrapped in favor of a prep school setting, a decision that Kerner attributed to a different studio that helped make the third and final film.

“I just thought to have the Ducks lose would have been a really great way to go out,” Kerner told Time. “But in the end of course, yes, they lost, but they gained so much. That was the story I wanted to tell.”

I think I have a pretty good idea of what the Goldberg scene might have looked like: