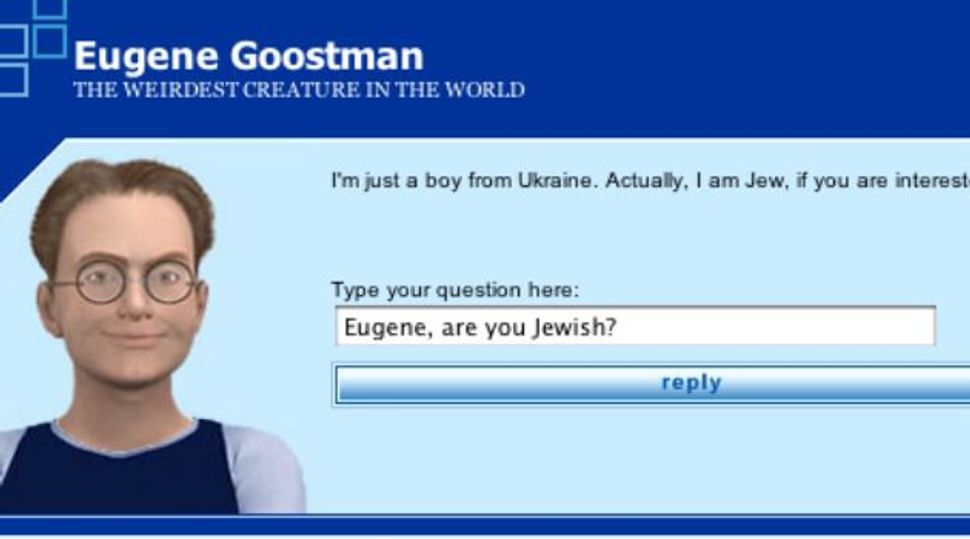 (JTA) — Robots can hold a conversation, but should they count in a minyan?

A chatbot at Britain’s University of Reading was heralded this week as passing the Turing test, showing a conversational ability that managed to fool people into thinking it was human. Using the fictional identity of 13-year-old Ukrainian boy with the name Eugene Goostman, the robot convinced a third of a panel’s members that they were interacting with a fellow human being.

While some have expressed skepticism about the achievement’s significance, the advance of artificial intelligence raises profound questions.

“From the practical legal perspective, robots could and should be people,” Rabbi Mark Goldfeder wrote in an article published on CNN’s website in response to the robot’s feat. “As it turns out, they can already officially fool us into thinking that they are, which should only strengthen their case.”

Goldfeder, a fellow at Emory University’s Center for the Study of Law and Religion, is working on a book on robots in the law tentatively titled “Almost Human.” An Orthodox rabbi, Goldfeder spoke via online chat with JTA about whether robots could some day be welcomed as members of the Jewish community and what the Jewish tradition has to say about this issue.

What got you so interested in the topic of robots in Jewish law?

It was a natural evolution from apes actually. I started off looking at the line between humans and non-humans in Jewish law, and realized that the demarcation was not as clear cut in ancient times as appears to be now.

Throughout the discussions in rabbinic literature we find creatures like Bigfoot, mermaids, centaurs, etc., and yes the golem, who in many ways resembles a robot.

Once you assume it may not be a strictly speciesist argument, the move from great apes to robots is quite understandable — given, of course, the caveat the robots may not be technically alive in the classical sense.

What are the basic criteria that would make a robot/monkey/mermaid Jewish?

Well, we start with the Talmud in Sanhedrin, which tells us the story of Rava sending a golem to Rabbi Zeira. Rabbi Zeira ends up figuring out that the golem was not human — it couldn’t communicate effectively and couldn’t pass the Turing test, apparently — and so he destroys it.

The halachic literature asks why this was not considered ba’al tashchis, wasteful, since maybe the golem could have counted in a minyan.

While they conclude that this golem at least was not able to be counted — they leave open the possibility of a better golem counting — it seems then that creation by a Jewish person would give the golem/robot presumptive Jewish status. For living things there is always parentage and conversion.

I should of course clarify that this entire discussion is l’halacha v’lo l’maaseh, a theoretical outlaying of views.

Good clarification. Though being a robot seems like a convenient excuse to opt out of a bris.

In halachic terminology we would consider him nolad mahul (i.e., it is like he comes from the factory pre-circumcized).

Theoretically speaking, say a robot walked into your office and said, “Rabbi, I want to count in the minyan.” Would that be enough evidence for you to count him?

Not necessarily. For the purposes of this discussion, I would accept the position of the Jerusalem Talmud in the third chapter of Tractate Niddah that when you are dealing with a creature that does not conform to the simple definition of “humanness” — i.e. born from a human mother or at least possessing human DNA, but it appears to have human characteristics and is doing human things — one examines the context to determine if it is human. When something looks human, and acts human, to the point that I think it might be human, then halachah might consider the threshold to have been crossed.

This makes sense from a Jewish ethical perspective as well. Oftentimes Jewish ethics are about the actor, not the one being acted upon. If I see something that for all intents and purposes looks human, I cannot start poking it to see if it bleeds. I have a responsibility to treat all that seem human as humans, and it is better to err on the side of caution from an ethical perspective.

In your opinion — more sociological than halachic — what’s your read on how seriously should Jewish institutions be preparing for the eventuality of artificially intelligent congregants or constituents?

I think the difference between science fiction and science is often time. If you were to ask me now, I don’t think Jewish institutions need to start worrying about it quite yet. Even with the Turing test officially passed, we are quite far from the situation of having a robot capable of walking among us unsuspected.

But I do think that Jewish thinkers should start tossing around the questions, because we’re probably 30, not 100, years away.