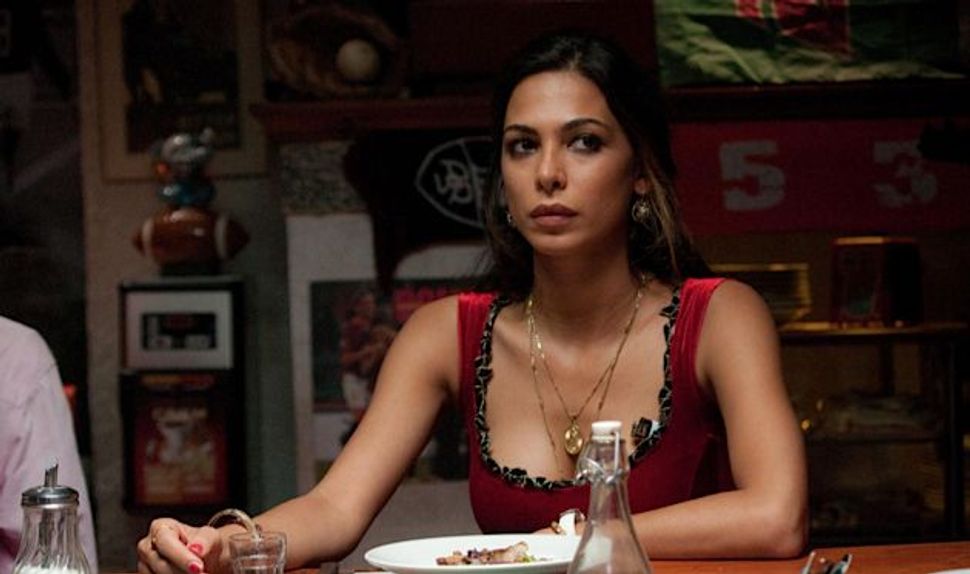 “Third Person,” written and directed by Paul Haggis (“Million Dollar Baby,” “Crash”), tells three love stories about passion, trust and betrayal. “In any relationship,” Haggis said, “there is always a third person present in some form.”

Israeli actress Moran Atias, who starred in the TV series “Crash,” pitched the idea of a multi-plotline film about love and relationships to Haggis. “Third Person” is the result, and Atias plays Roman beauty Monika in the movie. Atias stars opposite Adrien Brody as one of the three fraught couples. The all-star cast includes Liam Neeson, Olivia Wilde, James Franco, Mila Kunis, Maria Bello and Kim Bassinger.

Atias had worked directly with Haggis and Neeson when she starred in Haggis’s 2010 crime drama, “The Next Three Days.” Born and raised in Haifa, Atias later moved to Italy where she starred in several Italian films including the thriller “Gas.” Additionally, she worked for modeling campaigns for Dolce & Cabana, Roberto Cavalli and Versace. After much success in Italy she returned to Israel. Currently Atias lives in Los Angeles and stars in the FX series, “Tyrant,” an American show that takes place in the Middle East.

The Forward caught up with Moran Atias for an exclusive interview.

Dorri Olds: What inspired your idea for “Third Person?”

Moran Atias: I did the TV series “Crash.” The movie, “Crash, ”was an extremely impactful experience for me. I’d finally decided to move to America to fulfill my dream and I saw the movie on the plane. In between the clouds I spoke to God and asked him if I were ever to become an actress I wanted to make movies like that. Then the series came along and I was cast.

I always wanted to develop another movie like “Crash.” I love how life is so surprising and so dynamic and a little coincidence connects people from various places. There’s always a common attraction to universal needs of love and a feeling of worthiness. So that’s how my idea came about.

How did you pitch it to Paul Haggis?

I hate pitching, it’s the worst, but my “elevator pitch” to Paul was in the annoying way I’d been taught — to say it in one sentence. English is not my first language so it’s hard to condense. My pitch was, “Crash” for relationships. Then, the real pitch was a two-hour conversation where I desperately wanted Paul to develop a movie that questioned and explored dynamics between men and women, the fragile intimate relationship that we are so afraid to expose ourselves to.

I felt from personal experience and what I’ve seen with friends of mine, there is fear and all of this projection that we put on a relationship. It’s not just the person that’s with us in the relationship; it’s our demons, our past, our fear, our mother, our brother. It depends on what affected us. That’s what we bring to a relationship. It’s not just you and me in a naïve way innocently getting to know each other. That would be so simple, wouldn’t it? So, that conversation led us to two years of developing these different relationships and dynamics and I couldn’t be more proud of the way it all turned out.

Is the film close to your original concept?

Oh yes. There are so many things I see myself in, even in the other characters. This was a first experience for me as an aspiring writer. I felt very exposed. As actors we get to hide. You can change your hair and your accent and it’s not you. You have tricks, these masks. But as a writer it’s your fears, your doubts.

The outcome mesmerized me. I did not think at first that it would happen. I was sitting in a hotel room with an idea in my head and then an Oscar-winning filmmaker wants to do it and then there’s money to make it and then Liam Neeson signs on and none of it felt real to me. I was living in a bubble. Then it looked like it wouldn’t happen because we lost financing and Liam had to do “Taken.” I had yells of joy and moments of sobbing for the five years that led to my dream coming true, but in the end it was exactly as I’d hoped.

When you left Israel and moved to Italy was it to get away from family?

Interesting you say that. I’m very connected to my family but I think you hit the nail on the head. I wanted to grow artistically. I wanted to challenge myself in every way possible. Italy was a surprise in my life. I went there just to make money and then go back to Israel and study psychology. The arts wasn’t something I grew up with or thought I could be part of. Then I met an Italian agent with the most wonderful accent who convinced me of things and we started working together and I fell in love with the country and it was really hard to leave.

But you did move back to Israel, correct?

No, I started working in Israel and going back and forth. I did a lot of different things in Israel. I hosted “Deal or No Deal” and a radio show in Italy. I danced, wrote for a newspaper. I liked to explore different arts. But when I started acting I knew this was the medium I want to be in for the rest of my life. Stories onscreen affect me the most.

Did you enjoy working alongside Adrien Brody?

It was an incredible honor to work with somebody so talented and experienced — and a hero for the Jewish people! There is nobody in Israel that doesn’t know his character in Roman Polanski’s “The Pianist.” At the beginning I kept thinking, “I’m working with the pianist.”

You help a lot of people that are less fortunate than yourself. Why?

I feel very blessed in my life. I have a wonderful family and I’ve been able to achieve many of my dreams and I feel this need to do something for other people. Acting is all about you, people fix your hair, make you look beautiful, make you feel important and it’s a wonderful feeling to then go and help other people.

I’m currently shooting a very interesting show in Israel. It’s called “Tyrant.” It’s a new FX show about a fictional family that governs in our country. It deals with some interesting questions.

Whether democracy can actually exist in the Middle East. It’s also about relationships. I play the First Lady of this country and she’s married to this tyrant. I couldn’t be more grateful because I’m an Israeli. I was born in the Middle East, to a Jewish family, I had a Jewish upbringing and of course I have neighbors that are Arabs and Muslims or Christians. For me to honor this character I have to research what it’s like for an Arab woman in this country and in that position. It just makes me understand so much more about my neighbor, my enemy, my friend, whatever we call it. It’s definitely a provocative show.