Joe Berlinger On ‘Whitey’ Bulger and the FBI 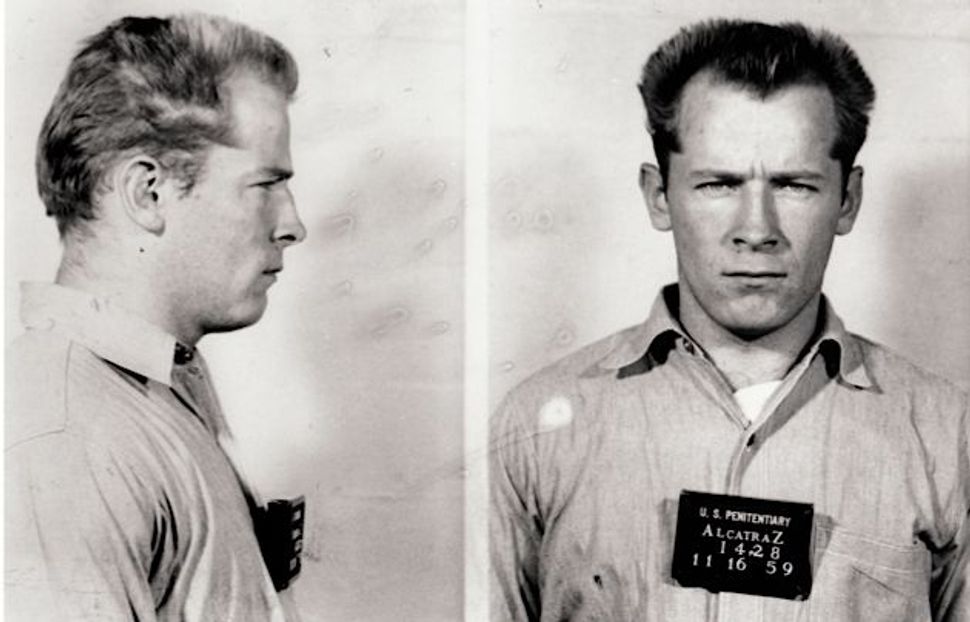 “Whitey: United States of America v. James J. Bulger” is a revelatory documentary by Academy Award-nominated and seven-time Emmy Award-nominated filmmaker Joe Berlinger. With unprecedented access, Berlinger shot his documentary from the beginning of “Whitey” Bulger’s 2013 trial and uncovers disturbing questions about the extent of FBI and Boston Police Department corruption. Berlinger’s film premiered at the Sundance Film Festival 2014 as an Official Selection.

James ‘Whitey’ Bulger was number two on America’s Most Wanted fugitives list, preceded only by Osama Bin Laden. Bulger acted as boss of the Winter Hill Irish mob family that terrorized Boston for years. In 2011, he was arrested in California at age 81 for 19 murders. Catherine Grieg, his girlfriend, was also arrested. They’d been hiding in plain sight in a Santa Monica apartment complex. Which begs the question: How hard could the FBI have been trying to find them?

As the story goes, Bulger served as an informant for the FBI since 1975. He was protected from punishment for his illegal activities in exchange for information about the Italian Patriarca crime family. In 1994, after a member of the FBI tipped him off to a pending indictment, Bulger and Catherine fled. In June 2013 Bulger went on trial for 32 counts of racketeering, money laundering, extortion, weapons charges and 19 murders. He was found guilty on 31 counts and complicit in 11 murders. In November 2013 Judge Denise Caspar sentenced Bulger to two life terms plus five years.

The New England media exposed criminal actions by federal, state, and local law enforcement officials that tied them to Bulger. Berlinger’s film asks the tough questions about the misconduct that took place.

Dorri Olds: What inspired this film?

Joe Berlinger: I have long been fascinated by the Whitey Bulger story and how this guy had been mythologized over the decades. There are a dozen books about Bulger, Johnny Depp is shooting a movie about him, Ben Affleck and Matt Damon are doing a movie, and “The Departed” was loosely based on Bulger. But, I never thought I’d have anything to add about this guy who was on top of the Boston underworld for 25 years, got tipped off by the FBI, and went on the lam, and was found again. But when he was arrested and a new generation of FBI came in, and there was going to be a trial, that’s when I started thinking there’s definitely a film here.

Whitey was brought back to Massachusetts in the biggest legal proceeding since the 1920 Sacco and Vanzetti trials. Here was a chance to separate the man from the myth. My guiding principle going into the film was that we would get to know what made Bulger possible. To my surprise, the government was not the breath of fresh air we needed.

This long awaited trial — this event that the victims’ families deserved in order to help them try to understand how Bulger was free to commit these crimes — was going to be a very narrowly focused trial on Bulger’s crimes. It was clear that Bulger was not going to emerge from prison from this trial; he wasn’t even contesting a number of the charges. The opportunity here was to understand the institutional corruption that allowed this guy to reign. That didn’t happen because Judge Casper, at the beginning, before the trial even began, disallowed Bulger from presenting his immunity claim and struck witnesses the defense wanted to present. It became clear that my mission for this film was to raise a lot of questions.

Did you get the answers?

Unfortunately, no. They have yet to be answered. At the end of the trial, District Attorney of Massachusetts Carmen Ortiz stood before the press and said, “With the conviction of James Bulger, this ugly chapter in Boston’s history is now over.” Well, is it over? We don’t really know what happened and too many troubling questions remain. If Whitey was really an informant — the central question of the film — then the government was in the business of picking and choosing who can live or die by saying, “Okay, we’re going after the Italian Mafia, so we’re going to let these Irish criminals run rough-shod over the city of Boston with impunity.”

Do you think John Connolly, the FBI agent convicted of obstruction of justice, was solely to blame?

The conventional narrative is that all of the bad behavior is the responsibility of one rogue agent, John Connolly. I find that hard to believe. The FBI and the Department of Justice have a chain of command. The FBI is a paramilitary organization. These guys would not be operating in a vacuum. Was Bulger an informant? I think the story of how he was allowed to operate has still not really been told. If he was not an informant — and there is credible evidence in the film that gives validity to that argument — then we barely know the truth about what happened. He should’ve been allowed to testify and call any witness he wanted to.

Are you sympathetic to the defense?

I’m no defender of Whitey Bulger. He’s a brutal, vicious killer who deserves to be behind bars, but I’m an advocate of the truth for the sake of the victims’ families. In this country we believe that people should be allowed to present whatever meaningful defense they want to present. In this case, Whitey was shut down from presenting central arguments for what allowed him to operate.

What stance do you take?

This film gives voice to the defense’s arguments without necessarily agreeing with them. They should’ve been discussed. If Bulger was not an informant, was he paying off corrupt officials in various police departments including the FBI? Was he paying them for information? Was the reason he wasn’t prosecuted because he had a deal to protect the top prosecutor in town who was afraid of retaliation by the Italian Mafia? The Winter Hill Gang usually did the hits for the Italian Mob and that’s why it’s possible Bulger said, “No, we’re going to protect Jeremiah O’Sullivan, a fellow Irishman, from a Mafia hit.” This may be a ludicrous supposition but these are questions that should’ve been allowed to be addressed.

Where does Bulger’s brother Billy fit in?

I’m not sure. “The Brothers Bulger” is a book that could’ve been a movie unto itself. It’s very Shakespearean. One brother reaches the top of the political Massachusetts machine, president of the Massachusetts Senate, and president of the University of Massachusetts, while the older brother is the top of the heap of the criminal pile. Did each protect the other? I don’t know. Did people fear attacking the political candidate Billy because they’d have to deal with Whitey the criminal? Did federal and local officials fear taking Whitey the criminal down because Billy the politician would seek retribution? I don’t know.

Didn’t you fear that corrupt FBI officials would come after you?

I don’t worry about that. I had more concerns going against Chevron [with “Crude: The Real Price of Oil”] than going against the federal government. Chevron caused me more pain and suffering than I think the FBI will.

Even if you believe the Bulger story, it’s disgusting. Did corrupt FBI officials decide, “We’re going to empower the Irish so that we can take down the Italians because J. Edgar Hoover was embarrassed years ago because he said there was no mob and then Joe Valachi testified there is a mob and gave up his Mafia bosses”? That’s how this whole top echelon informant program began. As long as confidential informants are the grease that makes the wheels turn on criminal investigations and we get into bed with bad people, bad things will happen.

I’m doing a TV show called “The System” which is on Al Jazeera. It’s an eight-part series about the criminal justice system. One part goes after bad practices in the FBI crime lab. So, I got ’em twice this year. [Smiles] But in all seriousness, I don’t think everybody is corrupt. I’ve met lots of great prosecutors, lots of great law enforcement people. I think most people who put on the badge, take the oath, and strap on the gun are doing it for the right reasons. But I also think there’s institutional blindness. Individuals might do the right thing but corporations, full of good people, do bad and colluding things. It’s the entity that does it. The individuals may be quite lovely but the groupthink mentality takes over.

Joe Berlinger On ‘Whitey’ Bulger and the FBI