‘The Passenger’: Holocaust On And Below Deck 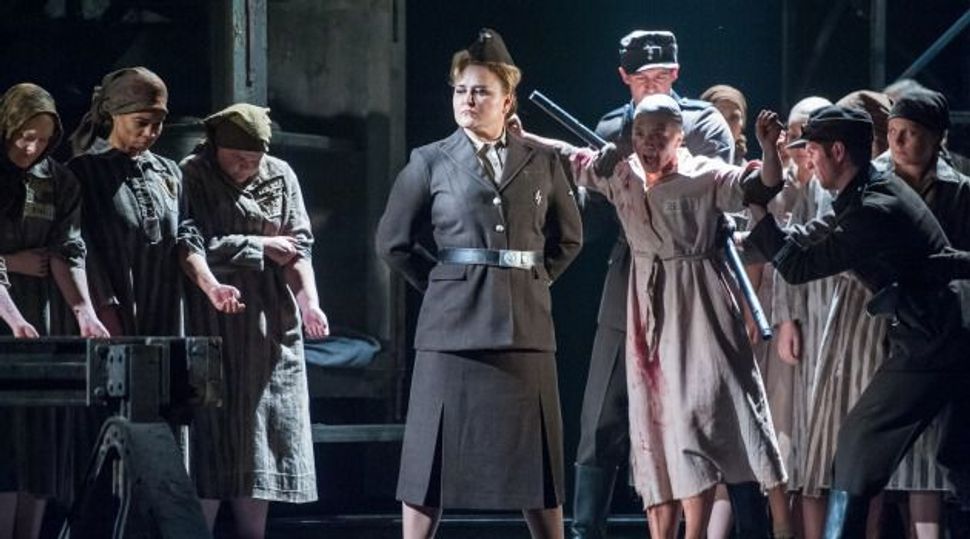 Mieczyslaw Weinberg’s 1968 opera “The Passenger,” which Lincoln Center Festival and Park Avenue Armory co-presented at the Armory, offered a soupcon of “Titanic” vibes with its 1960’s Brazil-bound ocean liner’s huge white funnel and its first class carefree passengers — elegant in all-white suits and gowns — waltzing to an orchestra’s calming beat.

Among the dancers, Walter (Joseph Kaiser), a 50-year old German diplomat and his 37-year old wife Liese (Michele Breedt) who suddenly panics when she recognizes one of the passengers –a former inmate of Auschwitz—at a time when she was a 22-year-old SS Overseer.

Performed in English by members of the Houston Grand Opera, directed by David Pountney with Patrick Summer conducting the Houston Grand Opera Orchestra, the program notes inform that the work was “deemed a perfect masterpiece by Weinberg’s mentor Dmitri Shostakovich”. In the realm of Holocaust re-creation, the presentation of the wretched women with their heads shaved and loose striped dresses ”The Passenger” stands alongside the visceral cinematic “Shoah” masterpiece “The Last Stop” “(Ostatni Etap”) by Wanda Jakubowska which she shot in 1948 at Auschwitz (using some of the camp’s survivors) and the only Holocaust film directed by a woman.

Polish-Jewish Weinberg — who escaped from Warsaw and ended up in the Soviet Union during WWII — never lived to see the opera performed. In the program notes Pountney notes “the Soviets didn’t want anything to do with pity for the Jews’ anything that did no actively further the Communist agenda was officially condemned as ‘Abstract Humanism’” a phrase Pountney noted “used by the Nazis vis a vis Red Cross inspections of the camps.’” Admitting that “The Passenger” is not a modern opera but a “time capsule,” he mounted its first full production in 2010 at the Bregenz Festival in Austria.”

Liese’s brutality to the woman as an SS Overseer is staggering. There is a love sub-plot, but mainly the opera is a musical j’accuse plea. As each woman prisoner sings her lament—the Russian (Kelly Kaduce) opts for a lullaby —the depth of each woman’s despair and hope is spelled out in a plea “Do not forget!” and to the fellow women prisoners, the promised: “I swear I will never forget you!

Most likely the nearly 1000-strong audience sitting on the floor-to-Armory ceiling highly raked tiered seats will not forget “The Passenger” operatic voyage.

‘The Passenger’: Holocaust On And Below Deck