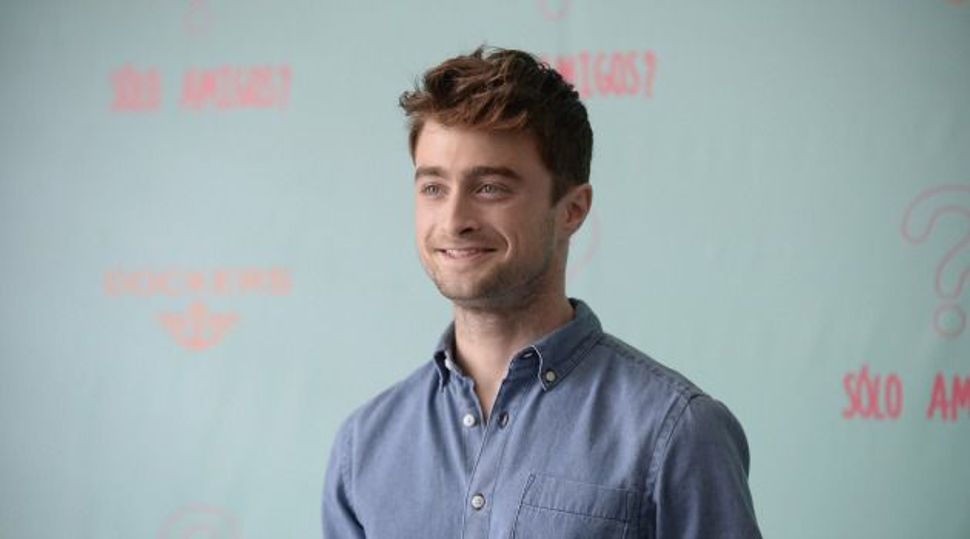 (Reuters) — From boy wizard Harry Potter to Beat poet Allen Ginsberg, actor Daniel Radcliffe has taken on a wide range of fantasy and period roles, but he finally steps into the real world with his latest film.

In the romantic comedy “What If,” out in U.S. theaters on Friday, Radcliffe plays Wallace, a young man damaged by previous romances who becomes enamored with a girl already in a steady relationship.

The 25-year-old British actor talked to Reuters about leaving “Potter” behind and proving his critics wrong.

Q: You have taken on action, fantasy and horror, but never a romantic comedy. What drew you to “What If”?

A: I had never done a contemporary project that was set in the world we are in that we recognize, I’ve never done that. “Potter” was in its own fantasy world and everything else I’ve done has been period films, so I’ve wanted to play somebody contemporary for a long time.

Q: What did playing Wallace allow you to explore?

A: This is the first time I’ve ever played a character that’s quite close to myself, not in terms of the decisions he makes or the way he goes about things, but just in terms of his sense of humor and his speed of thought.

I used to worry that playing myself, or that not playing somebody that different from myself, would make people think of “Harry Potter.” And then I realized I hadn’t been playing myself at all in “Harry Potter.” I was playing a very different, much sterner character than I am myself. So I think I let a bit of that embarrassment go, and it definitely made it easier.

Q: You received criticism for your on-screen performances early in your Potter career. Did that fuel your determination?

A: Yeah, prove everyone wrong. Anyone who ever said I couldn’t do it – and this does sound terrible – but I do want every film to be a “fuck you” to them. If you say horrible shit about a 12-year-old boy, then yeah, I want to make you pay for that, I want to embarrass you by my success. Like, that’s what I do. (laughs) … I’m not somebody who makes a fuss about stuff or gets particularly angry ever, but I do have a mean competitive streak, which I suppose that’s how it comes out. That and table tennis.

Q: What genre would you like to take on?

A: I’ve always thought sci-fi looks really fun, just because of the set. And if it’s a good sci-fi movie, a clever sci-fi movie, with an interesting take on the future, then God yeah, I’d be up for that. I would just like to be on a spaceship set.

Q: How do you deal with the celebrity spotlight?

A: You don’t. The only way to navigate it sanely is to pay as little attention to it as possible. … It’s weird that people take photographs of you, it’s weird that anyone would care that you went to the shops. They always have to write some headline, like “Daniel Radcliffe and girlfriend go for a stroll to the shops,” because that makes a story. Because otherwise it’s just some … creep taking photographs of you on the street, and if there isn’t a headline, that’s all it amounts to.

Q: You’ve been acting for 15 years now. Would you ever step away from it all?

A: There’s a chance, but I love what I do so much that I don’t think I could ever imagine doing anything else. I can’t imagine if somebody told me tomorrow, “You’re never going to be stepping on a film set again.” I genuinely don’t know what I’d do. I couldn’t imagine my life without it.