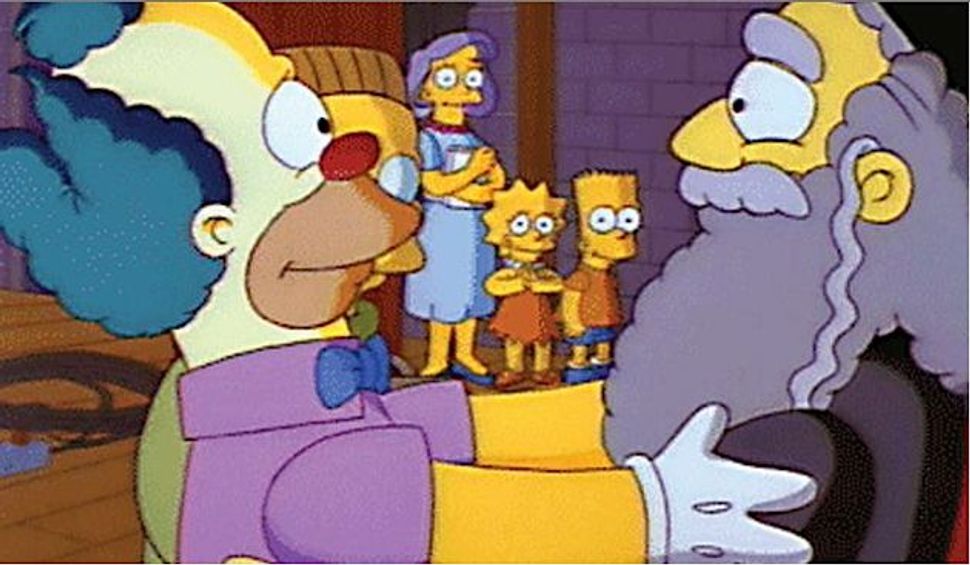 “The Simpsons” 25th anniversary marathon on cable network FXX — now airing every episode, plus the 2007 feature film — includes a surprising insight for careful observers: The award-winning cartoon sitcom is one of the Jews’ best friends.

For millions in North America and globally who have never actually met a Jew, “The Simpsons” has showcased us in a knowing, sympathetic, yet realistic way. The series has portrayed numerous important aspects of modern (and ancient) Jewish life in brilliant 23-minute bites. If the only thing viewers knew about the Jews was what they saw on “The Simpsons,” they — and we — would be well served.

Jews are part of the fabric of Springfield (The Simpsons’ home town), arguably a modern American version of Chelm, Yiddish folklore’s fabled village of nitwits. On the show, a Conservative synagogue (or Orthodox; it’s deliberately vague, like much in the series) has the unlikely moniker of Temple Beth Springfield. There’s a preserved-in-amber “old neighborhood,” straight out of New York’s Lower East Side (“Tannen’s Fatty Meats”), plus a Jewish “Walk of Fame,” featuring Sandy Koufax, Joan Rivers, Albert Einstein and Lorne Michaels.

Still, Springfield has lots of clueless gentiles, beginning with Protestant minister, Reverend Lovejoy, who keeps the local rabbi in a separate “non-Christian Rolodex,” and an elementary school principal who thinks Yom Kippur is a made-up holiday. No doubt in observance of the High Holy Days, the marquee of Lovejoy’s neighboring (but unneighborly) church reads: “No Synagogue Parking.” On a visit to New York, bad boy Bart Simpson mistakes three bearded rabbis for the Texas rock group ZZ Top. Homer, the family’s lovable doofus dad, is shocked to learn from his daughter that Mel Brooks is Jewish. He is so confused, he asks, in another episode, “Are we Jewish?”

In 1999’s “Simpsons Bible Stories,” a dream sequence, the show’s characters reenact tales like the Exodus. After leading the Children of Israel across the Red Sea, the little boy playing Moses is stunned when he learns the former slaves still face 40 years of desert wandering. But, he asks hopefully, after that “it’s clear sailing for the Jews, isn’t that right?” Lisa Simpson (playing his sister Miriam), replies with a tight smile, “Well, more or less.”

But the all-time classics are two episodes from different seasons, with guest star Jackie Mason portraying Rabbi Krustofski, estranged father of Krusty the Clown, a children’s TV host. In “Like Father, Like Clown” (1991) and “Today I am a Clown” (2003), the writers portray the full spectrum of Jewish assimilation in America, as well as the ongoing tension between tradition and modernity. The Simpson children use sometimes obscure references from Talmudic and Hasidic lore to engineer father-son reconciliation. The episodes, which use “The Jazz Singer” as a trope, credit as consultant Rabbi Harold Schulweis and are so insightful that Hebrew schools and Jewish youth groups used them.

Even exotic aspects of Judaism come into focus on The Simpsons. In 2006’s “Treehouse of Horrors XVII,” the annual Halloween fantasy anthology featured a segment based on the Golem of Prague. Krusty explains that the creature, which Bart accidentally conjures up in the clown’s prop room, was made from river mud and brought to life in the 16th century by a rabbi’s kabbalistic incantation. The ancient superhero became “the legendary defender of the Jewish people — like Alan Dershowitz, but with a conscience.” How better to introduce such a mystical, medieval and esoteric part of Jewish lore to the world?

In 2010’s “The Greatest Story Ever D’ohed,” The Simpsons joined a Christian pilgrimage to Jerusalem, where they encountered a believably rude Israeli tour guide played by Sacha Baron Cohen. Krusty popped up separately on a search for his Jewish identity. The episode charts an uncharacteristically careful course, avoiding “making the desert bloom” propaganda, while finessing the Palestinian issue. It ends with a squishy plea for ecumenical understanding.

Even in the many episodes that don’t focus on Jews and Judaism, an irony-laden, Jewish sensibility infuses the show. Many of the writers are Jewish (or might as well be). They have, Schulweis told me years ago, “a Yiddish spark in them.” A character observes that a grizzly bear can tear through a tree “like a Jewish mother through self-esteem.”

Orlando Rabbi Steven Engel argues that “There is no question that ‘The Simpsons’ Springfield in many ways accurately reflects the feelings, concerns, aspirations, and realities of contemporary Jews.” Not convinced? Consider this: In May of this year, the Egyptian television network Al-Tahrir attacked “The Simpsons” as being part of an American Jewish cultural and political conspiracy. Maybe they’re right.

Mark I. Pinsky is author of “The Gospel According to The Simpsons: The Spiritual Life of the World’s Most Animated Family.”