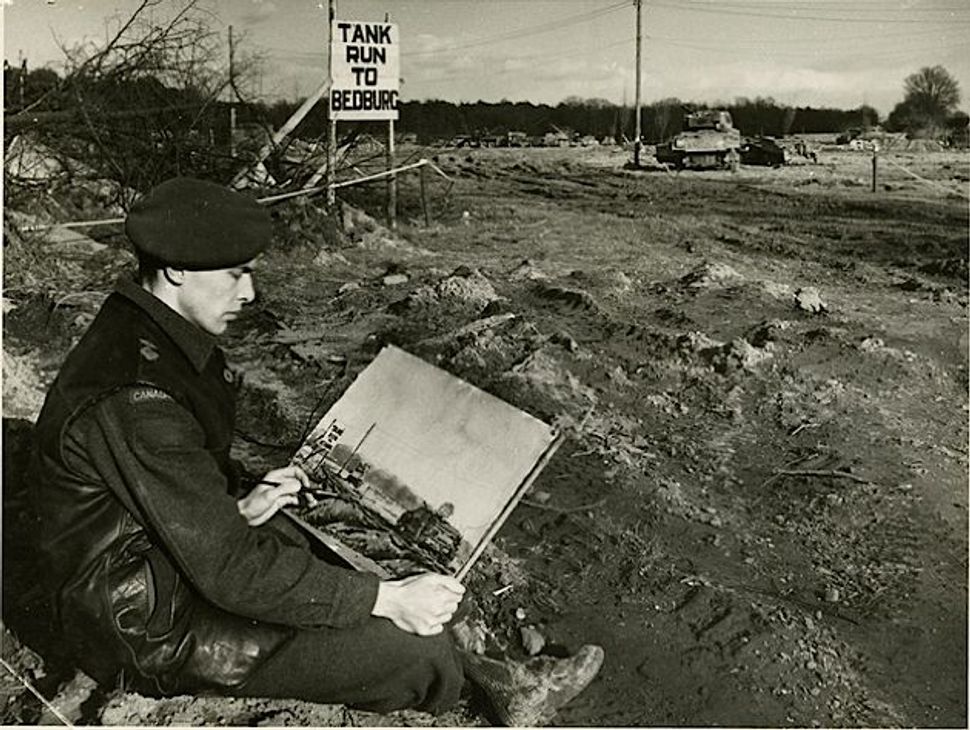 The hazy images take up just one small corner of a massive new exhibition on revered Canadian artist Alex Colville at the Art Gallery of Ontario in Toronto.

But his depictions of corpses at Bergen-Belsen, where a young Colville was dispatched to document World War II atrocities, hold the key to understanding the artist’s worldview and work.

“Seeing that really marked Colville for the rest of his life,” Andrew Hunter, the AGO’s curator of Canadian art, told the Forward. “More than just seeing war, what he saw at Belsen really cast a shadow over his view of the world and of what people are capable of doing.”

The experience also shaped the signatures that came to define Colville’s painting, said Hunter, who curated the exhibition. “He thought a lot about the chaos that lies under the surface of order,” Hunter said. “It sounds simple, but those who ran the camps did it in a way that was very structured. On the surface, it was all highly rational. He was conscious of how order could also lead to great evil.”

In Colville’s iconic 1967 painting “Pacific,” a shirtless man, visible from the back, stares at the ocean while a gun rests on an old sewing table in the foreground. The gun, Hunter explained, represents the possibility of chaos; the ruler built into the sewing table presents a symbol of order.

Colville went to Europe in 1943 as an official War Artist, a designation the Canadian government still confers today. He spent three years abroad, “but he wasn’t Alex Colville, the Famous Canadian Painter,” Hunter said. “He hadn’t really developed his style. The images he made during the war are very painterly, compared to his much tighter later work.”

His painting of bodies at Belsen almost literally stopped traffic at the exhibition, which I saw during a press preview.

“A lot of people comment on that canvas,” Hunter said. “It’s cropped and almost abstract — like the scene was so overwhelming, and with so many bodies, that Colville couldn’t fit them into a single image.” After that, Hunter said, Colville also struggled with the question of how to deal with the Holocaust in art. “It’s the question so many raised: What’s role of the artist, poet, writer? Colville, like many others, struggled around, ‘What can I do?’”

And Jewish fimmakers Joel and Ethan Coen, the exhibition posits, presented a Colvillean view of the world in 2007’s “No Country for Old Men” through the character of coin-tossing murderer Anton Chigurh. “Colville talked about the potential for things to go horribly wrong, and people who have plans, and how those plans go off,” Hunter said. “The outcome of Chighur’s worldview is quite horrendous.”

Like the titles of his paintings, Colville “was very precise and pointed when interviewed,” Hunter said. “He was a little cryptic, and only provided basic details. But when you speak to his family, Belsen was a key event in his life he would always look back to. He was an optimist, a happy man, but always went back to the war and how things could always go horribly wrong.
“He was a deeply empathetic person. But he knew humans could go to very dark places.”