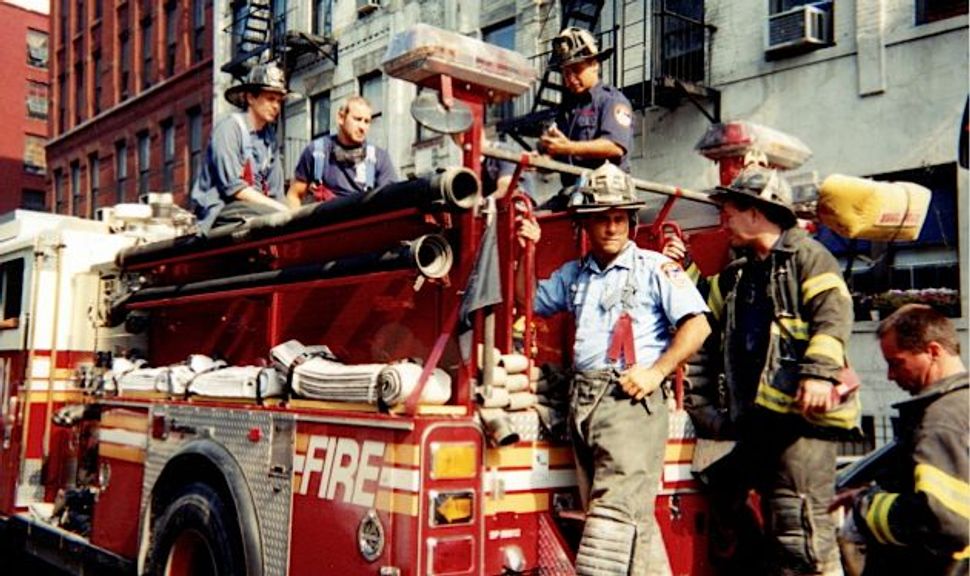 Filmmaker Liz Garbus is responsible for numerous powerful and award-winning documentaries: “The Farm: Angola USA,” about Louisiana’s infamous maximum security prison; “The Nazi Officer’s Wife: How One Jewish Woman Survived the Holocaust”; and “Killing in the Name,” an Academy Award-nominated documentary about Islamic terrorism.

Therefore, the emotional intensity of her latest, “A Good Job: Stories of the FDNY,” doesn’t come as a surprise. The title has nothing to do with salary or benefits. In fact, “a good job,” according to one of the fire fighters interviewed, is “a really tough fire.” And “good jobs” are a recurring theme in the film: a 1966 conflagration in which a dozen fire fighters died; the Happy Land Social Club fire (87 victims), and of course 9/11.

A number of fire fighters — including early women and African American members of what until recently was an almost exclusively male and white fraternity — are interviewed. What’s surprising is how little swagger or arrogance they display. Despite the constant peril of the job, they don’t look at their work much differently than an office worker whose greatest risk is a paper cut. Their answers to interesting questions posed by the filmmakers are thoughtful, intelligent and moving.

Garbus partnered on the project with actor Steve Buscemi, who worked as a New York City fire fighter for five years before pursuing a career as an actor. Garbus, 44, spoke to the Forward about how the two met, Buscemi’s contribution, and how making her first documentary got her kicked out of her high school physics class.

Curt Schleier: How did you get involved in the film?

Liz Garbus: I work a lot with HBO and often they will make a match, so to speak. Steve Buscemi had this idea about doing a film about the fire department and Sheila Nevins [president of HBO Documentary Films] put us together.

I would imagine Buscemi’s background as a fire fighter was extremely helpful.

Because of Steve’s relationships we had really wonderful access. He opened firehouse doors to a society, a community that is mostly closed to outsiders. It has its own language, its own rules. It’s a brotherhood (being a simplified word since there are now women, too). It’s a very bonded community and it probably would have been impossible for a filmmaker to get in from the outside [without someone like Steve].

Were you surprised at how insightful and honest the fire fighters were? In some cases, they talked about some pretty painful memories.

Yes. I didn’t know much about them. I was probably like your average citizen in terms of pre-conceived notions of who fire fighters are, so I was surprised by the depths of their stories and depths of their analysis. I think I can explain that in two ways. The fact that Steve was a producer meant they trusted me and they trusted my team. They knew Steve would never do anything negative and felt they were in good hands and could be honest. Also, since 9/11 there’s been a real push in the fire department for their people to become more introspective.

“Shouting Fire: Stories From the Edge of Free Speech,” another of your documentaries, featured a famous civil liberties lawyer named, what was it — oh yes, Martin Garbus. What was your upbringing like?

Do you bring any of that to your work?

I think I bring a kind of Jewish empathy, social activism, and caring and building bridges and humanism.

How did you become a documentarian?

I started making little documentaries when I was in high school, but after I got out of [college] I thought I might follow my father’s footsteps. But then I ended up working for some filmmakers and that [eventually] led to “The Farm,” my first feature length film.

I’m more interested in your first high school film. What was that?

I put together something called “The Last Week of School.” It’s something people do all the time. But there were no computer film editing programs. I had to edit it in my camera. I interviewed teachers and students. I even got kicked out of physics class for shooting [while class was in session]. I showed it to a bunch of kids and their parents. One of my friend’s parent is a documentary filmmaker, David Grubin, and he said to me, Lizzy, you made a documentary.