Clearing Hurdles at the Nazi Olympics 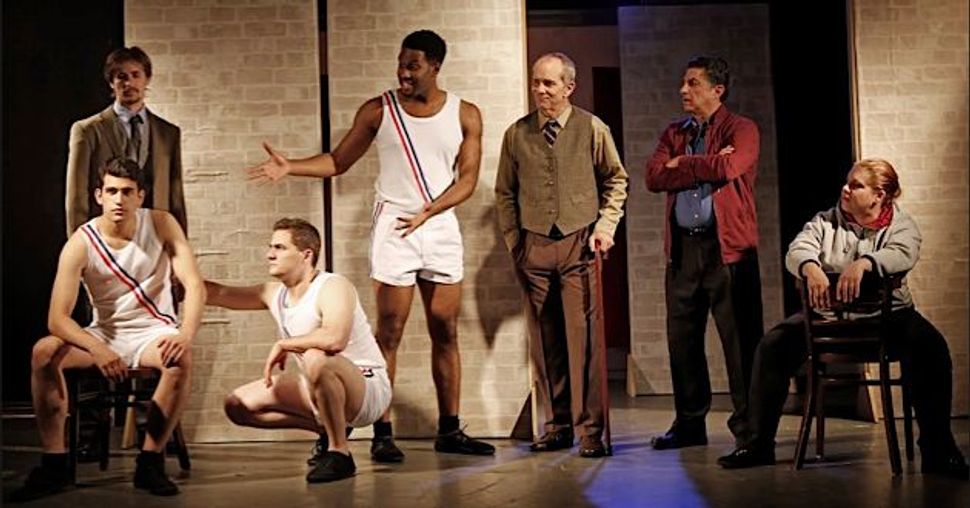 I’m certain everyone involved in “Olympics Uber Alles,” currently running off-Broadway, had good intentions. But as we all know, the road to Hell was paved with them. And while the play won’t lead audiences to the netherworld, it won’t leave them feeling a heavenly embrace, either.

History Professor Steve Feinstein (Tim Dowd) wants to mount an exhibit about anti-Semitism using the 1936 — or Nazi — Olympics as its prime example. But the museum curator, Kate McCarthy (Amy Handra), claims the event slots are reserved for minorities, and by minorities she means Blacks, Hispanics and Asians.

The play travels back and forth in time, from the ‘30s, when Marty Glickman and teammate Sam Stoller are kept from running in the Olympics, back to the present, when Feinstein tries to convince the museum board that Jews are a minority worthy of a spot on the schedule.

“Olympics” was written by Samuel J. Bernstein with the help of Marguerite Krupp, who provided, according to the program, “the Catholic perspective.” Bernstein, who has had some plays produced in smaller venues, is a professor of English at Northeastern University and Krupp lectures there as well.

This is not surprising since much of the dialogue sounds lecture-like rather than conversational. Even when a discussion becomes more relaxed, it’s clearly to establish a plot point rather than a natural outgrowth of the story.

The play also lacks subtlety; characters are black and white rather than real-life shades of grey. In a flashback we see that Kate McCarthy’s dad was not just a dumb anti-Semite, but also an abusive father and husband who wouldn’t let his daughter even play with a Jewish friend. For most of the play, Feinstein, too, is a one-trick pony. Every time he gets bad news, he sees anti-Semites hiding behind the bushes.

Ultimately, the play seems to work against itself. After the exhibit gets approved, Feinstein has second thoughts. It seems that Glickman and Stoller may not have been banned because they were Jewish — the conventional wisdom in every Hebraic household. Instead, the play suggests that the Olympic team’s sprint coach, Dean Cromwell, who was the track coach at the University of Southern California, wanted his own runners in the 4 x 100 relay and switched things around for that reason alone. It wasn’t the Germans. It wasn’t Avery Brundage. It was simply USC pride.

Moreover, it is the head of some unnamed Jewish agency that urges Feinstein to drop the idea, feeling the uncertainty of its provenance might encourage Holocaust deniers.

Director Debra Whitfield does a good job moving eight actors — each playing multiple roles — around a tiny stage. She handles the process in part with color blind and gender-neutral casting. That certainly can work when dealing with unknown characters but, although it may be politically incorrect for me to say so, I find it disconcerting to see an African-American Winston Churchill or a woman play Hitler.

There was one thing that seemed very real, however. Feinstein, well, he wound up with the blond Catholic girl.

Clearing Hurdles at the Nazi Olympics