Jewish Athletes Bumped from ’36 Olympics — A Chat With Samuel Bernstein 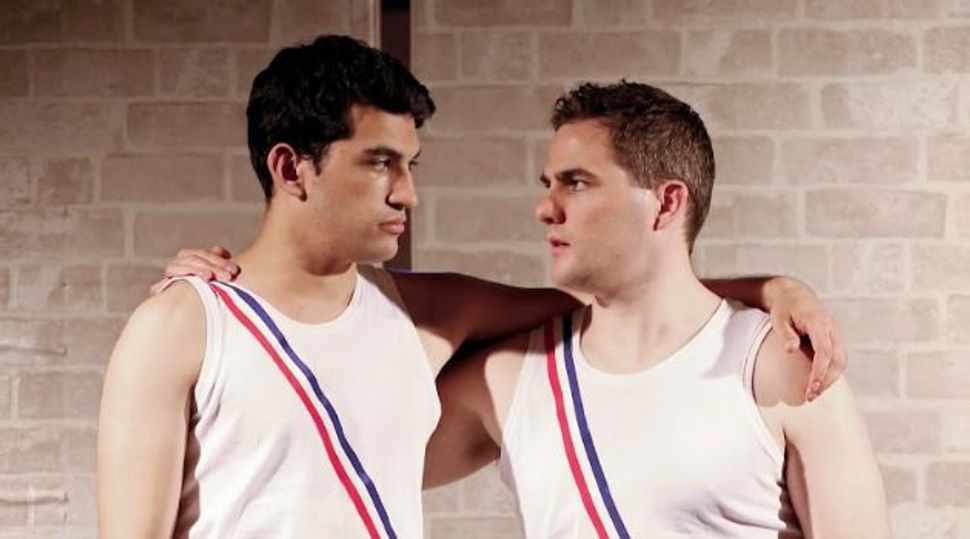 Having known John Slade (ne Hans Schlessinger) — once senior managing director of Bear, Sears & Co. who died at 97 in 2005 — a German Jew barred from Germany’s field hockey team in the 1936 Olympics, I looked forward to “Olympics Uber Alles,” a new play by Samuel Bernstein and Marguerite Krupp which deals with the politics behind the exclusion of American Jewish Olympic runners Marty Glickman and Sam Stoler from the 1936 Berlin Games.

As my Scots teacher, Ms. MacKenzie at Alfred Joyce School in Montreal drummed into me: “If you can’t say anything nice, say nothing at all. [or] find something good to say” which is why I sought out Bernstein for a chat.

A professor of English at Northwestern University, his collaborator Marguerite Krupp, a researcher at Northwestern — according to program notes —  “brings the Catholic perspective” to the well-intentioned play about the battle to mount an exhibit at a fictitious museum dealing with anti-Semitism and the exclusion of American runners Marty Glickman and Sam Stoller from the 1936 Olympics.

A charming man, Bernstein told me that his parents are from Poland…that he knew Jewish literature and “was familiar with the Holocaust… an experience that is a rich part of my life.” How did the play come about? ’ I asked. “I was riding in a car, [my] wife, reading about the Olympics. She was shocked by the unethical behavior of sports figures involved directly and indirectly in the Olympics movement in keeping Glickman and Stoller out… She said, ‘Sam, that’s the play you ought to write.’”

“What about the characters in the play objecting to a Holocaust exhibit? Who was Edelman?” I had racked my brain thinking it was a name I should have known. “They are all fictitious,” said Bernstein. “The museum is fictitious, Edelman is fictitious” — as is the final romantic rapprochement between the nonexistent museum’s fictitious Jewish professor and fictitious blonde Catholic curator.

Zigzagging between the 1936 Olympics skullduggery that kept Glickman and Stoller out of the running, the play offers a warp speed recitative of 2000 years of anti-Jewish atrocities worthy of a semester-long college-level course that includes — if I remember correctly — the Bar Kochba revolt, the Second Crusade, the York massacre — all preambles to Hitlerian anti-Semitism. This montage, with its 8-strong heroic cast speedily switching into 41 roles concludes with the birth of Israel and the cast singing “Hatikvah” (for which no one in my audience stood up).

How did you cast the players?” I asked Bernstein. “Most of the members in the play are not Jewish. I think what happens [in the play] becomes so moving to non-Jews who are deeply affected…. One actor came to me and said ‘I am so proud to be part of a play that is so meaningful and enables people to transcend the Jewish parameters of the play.’”

Why, I wonder, would you want to transcend the Jewish parameters of the play when the central players are Jewish, and the the historical subtext is one of Jewish persecution over the ages?

P.S. John Slade went on to play on America’s field hockey team in the 1948 Olympics.

Jewish Athletes Bumped from ’36 Olympics — A Chat With Samuel Bernstein