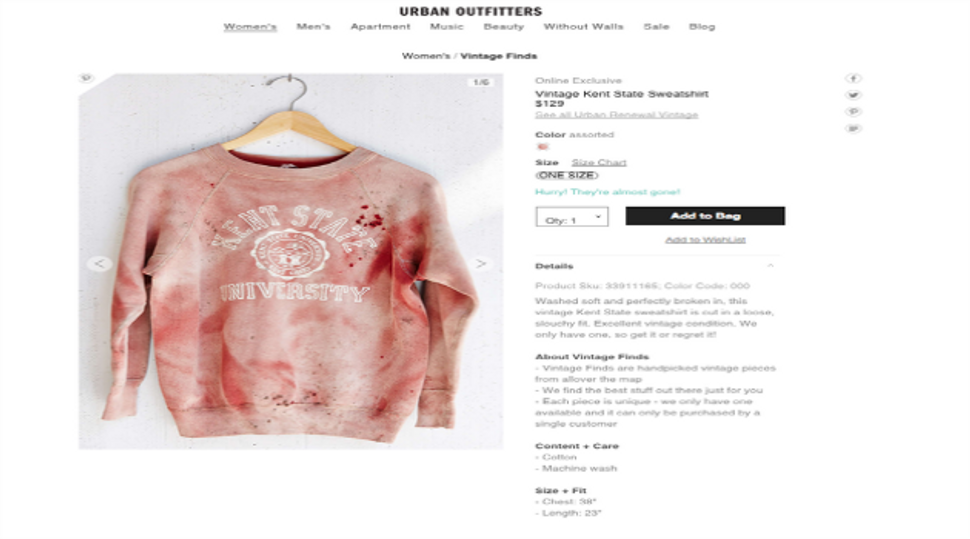 Urban Outfitters has done it again. The (once) hip clothing giant took flack this week after listing an eyebrow-raising product for sale: a Kent State sweatshirt with a blood-spatter design.

The sweatshirt seems to be a poorly-conceived nod to the Kent State shootings of 1970, in which Ohio National Guardsmen opened fire on a crowd of students protesting the Vietnam war, killing four. Three of the students killed that day — Allison Krause, Sandra Scheuer, and Jeffrey Miller — were Jewish, and Kent State’s Hillel rabbi led early efforts to memorialize the shootings.

As part of its “vintage” collection, Urban Outfitters only made one of the sweatshirts available for purchase on its website, and the item is currently listed as “sold out.” But that hasn’t stopped the criticism from rolling in.

Kent State University described the sweatshirt’s sale as “beyond poor taste” and invited Urban Outfitters’ executives to visit its campus memorial to the shootings, according to the Washington Post. The company has since apologized, but denied that the shirt was an allusion to the Kent State shootings.

This is not the first time Urban Outfitters has proven just how badly its staff needs sensitivity training. Black leaders condemned its 2003 parody of Monopoly, “Ghettopoly,” which included game cards that read, “You got yo whole neighborhood addicted to crack. Collect $50.” That same year, the clothing chain released a shirt with words, “Everyone loves a Jewish girl,” surrounded by dollar signs and shopping bags.