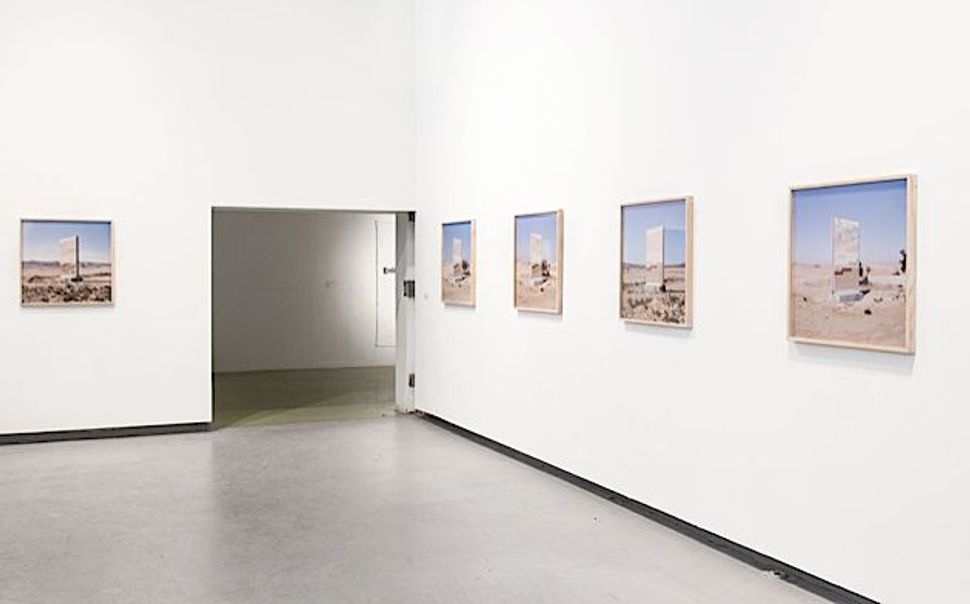 When September’s Chicago magazine tipped Assaf Evron as one of “four rising artists worth investing in,” it was the first many in the Windy City had heard of the Israeli-born creator.

But Evron has long been a name to watch among the cognoscenti. In Israel, his work is in permanent collections of the Israel Museum in Jerusalem, the Tel Aviv Museum of Art, the Haifa Museum of Art and the Petach Tikva Museum of Art. In Chicago, where he’s lived since 2011, he’s got work in two major area shows. A group show at the Little Wolf, WI venue Poor Farm includes his photographic installation based on infrared kinect sensor light; at Chicago’s Museum of Contemporary Photography, the show “Phantoms in the Dirt” showcases his repurposed photos of 1930s French colonial settlements. A November group show at the Haifa Museum of Art is next.

Evron’s sculptures and photographs “play with perception, often distorting everyday objects into abstract images,“ Chicago magazine wrote. “His work consists of things we can’t easily see or decipher,” a local curator told the magazine. “It’s smart and subtle and appealingly enigmatic. It lingers with you.”

One-half of an art-world power couple, the 37-year-old Evron is married to acclaimed Israeli artist Nelly Agassi, who late last year had her own exhibition of video works at the Israel Museum in Jerusalem. Evron spoke to the Forward from their home in the Chicago neighborhood of Wicker Park.

Michael Kaminer: You’ve got an unusual background for an artist. How did your studies at the Cohn Institute for the History and Philosophy of Science and Ideas at Tel Aviv University influence your work?

Asaf Evron: There is a philosophical background to my work, though it’s not about philosophy — it’s at the back of the work and not the subject matter. I studied the history of modernity in Western Europe and critical theory. My thesis was on the philosophy of the visual and linear perspective, optics, and the thinking of [Leon Battista] Alberti and [Erwin] Panofsky. That course of study was about the phenomenological approach philosophy can offer — an inquiry of different disciplines that feed each other in a way.

You spent four years as a photojournalist for Haaretz. How does that experience come through in the art you’re doing now?

At Haaretz, I was trying to do the total opposite of what I do in art. I tried to find my own language, as opposed to the language you use as a photojournalist. What’s interesting about Haaretz is that there’s a friction with reality. It’s very intense, and overwhelming. Making art was kind of an exhaust valve for that.

Why did you settle in Chicago instead of a more conventional art-world center like New York?

New York is kind of the default. From the point of an Israeli, it seems like only place to study and make art in the States. I was interested in the surrounding parts — the U.S. is a big country. And there’s so much happening here in Chicago. It was a good option, and it offers an alternative to the bipolarity of L.A. and New York. It’s a great place to make art. You have both mental and physical space to do it. And it’s a good base for an international operation.

Your work isn’t explicitly political, like some Israeli art. Is there something under the surface in terms of messages?

It depends on how you understand “political.” My work deals with optics and with the way we see, construct, and represent the world. I think those issues are highly politically charged. The politics of a constructed environment — all the things we take for granted but are blind to in our everyday lives and don’t question —- has deep political implications.

You are one of three artists showcased in a show at the Haifa Museum of Art this November. With the conflict in the region, did your talks with the museum ever address the possibility of cancelling or postponing the show?

The conflict is there all the time. It’s been there for 50 years. So unfortunately that’s the situation. Those aren’t the types of questions we think of. Maybe from an American perspective it seems like a question.

In Haifa, I’ll be exhibiting with people I’ve worked with for years. So actually, it’s coming home. I’m excited to have the opportunity to show work in the context of where I’ve come from.