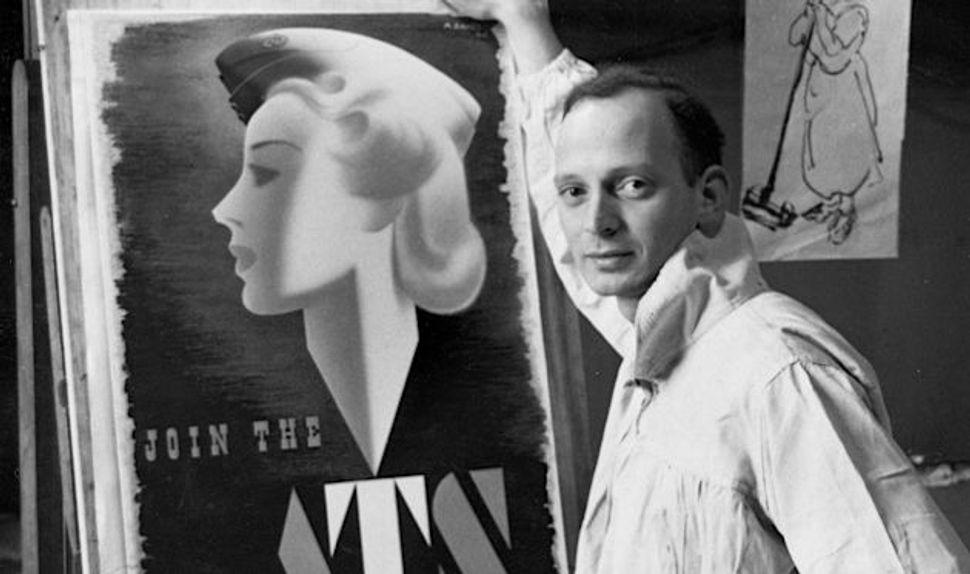 “To be an artist you need talent and you haven’t got it,” the young Abram Games was told by his headteacher, advising him to pursue a career as a bank clerk instead. Regardless, with what appears to be characteristic tenacity, sheer hard work and obvious talent, Games went on to become one of the most influential British designers of the 20th century.

“Designing the 20th Century,” a major new exhibition at the Jewish Museum London, marks the centenary of his birth, and celebrates Games’s life and art. The show successfully juxtaposes the professional and the personal elements of Games’s life, and visitors will leave having gained a significant insight into Games’s creative output and character.

Games was an exponent of the poster, particularly those produced during the Second World War. His 60-year career also included stamps and emblems, as well as product design.

The son of Eastern European immigrants, Games grew up in London’s East End, often assisting his father, who was a professional photographer. He attended art school for just two terms before deciding to build his own portfolio, establishing himself as a freelance designer. The exhibition displays many of his iconic works, as well as personal objects and a re-creation of his north London studio, which was attached to the family’s Golders Green home.

Games was inspired by modern art and his images have a directness and force reminiscent of Constructivism. His sharp, vibrant, distinctive posters were produced in an era where the medium was king of the advertising campaign. Games firmly believed that the greatest impact came from the simplest designs and his philosophy was, “maximum meaning, minimum means.” He once commented that, “the harder I work the simpler it looks.”

He produced posters for commercial clients, such as Guinness, Shell and the Financial Times, as well as for public bodies like London Transport but his greatest achievements were for good causes. Naomi Games, one of Games’s daughters and who, along with her brother, Daniel, has assisted in curating this exhibition, described her father as a “socialist and humanist.” He cared passionately about social causes and was less comfortable with commercial work. Consequently, Naomi Games said, “we were very poor.”

In 1942, Games was appointed as the Official War Poster Artist; the only person in army history to be bestowed with such a title. Games was not afraid of controversy and his famous 1941 ATS recruiting (Auxiliary Territorial Service) poster provoked heated parliamentary debate. Nicknamed “The Blonde Bombshell’” it was deemed unsuitable because of its “glamorous” depiction of an ATS recruit.

Games was among the first people at the War Office to see footage of the Bergen-Belsen concentration camp, which, Naomi Games said, “deeply affected him all his life.” He felt intensely Jewish and acknowledged that it contributed to the character of his work. He did pro-bono design for the Jewish Committee for Relief Abroad and on display is a poster created to raise money to assist displaced persons. Another particularly disturbing poster is of an emaciated Jew, whose body outline forms the shape of a Star of David. “Give Clothing For Liberated Jewry” it asks.

Games was ambitious but uncompromising. Clients were offered just one version of an image, which they could accept or leave. His family was also integral to his creative process. His wife, Marianne Salfeld, a textile designer, and his children, would vet new ideas. If met with blank faces, the idea would be discarded.

During the post-war period Games continued to be prolific. He designed the stamp for the 1948 London Olympics and in 1951 won a competition to design the emblem for the Festival of Britain, making him a household name. It was Games who designed the BBC’s first animated identifier and in 1957 he was awarded the Order of the British Empire. But there were only three posters that Games wanted to be remembered by: “Guinness G” (1956), the wartime “Your Talk May Kill Your Comrades” (1942) and the humanitarian “Freedom from Hunger” (for the Food and Agricultural Organization of the U.N.).

Unbelievably, considering his immense output and innovation, in 1996, the year of his death, Games said that “There is so much to learn that I still consider myself a beginner.”