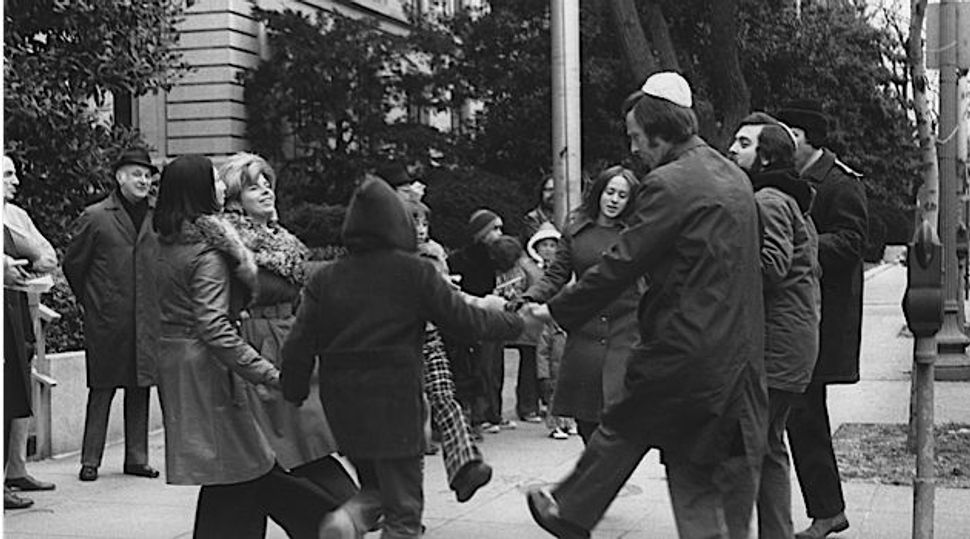 Photo Courtesy of the Jewish Historical Society of Greater Washington

Long before Occupy Wall Street, protests were held from 12:30 to 12:45 p.m. every day from December 10, 1970, until January 27, 1991, in front of the Soviet embassy in Washington, D.C., in an effort to raise awareness about the mistreatment of Soviet Jews. Those demonstrations, held rain or shine — including through muggy District summers — are the subject of the exhibit “Voices of the Vigil: D.C.’s Soviet Jewry Movement,” which is on view at the Jewish Community Center of Greater Washington in Rockville, Md., until October 19.

“Washington Jews organized rallies and marches, waged letter-writing campaigns to pressure politicians, sent packages and Rosh Hashanah greeting cards to refuseniks, and visited Jews in the Soviet Union,” according to the exhibit website.

Some gems from the exhibit include photographs of the actor Theodore Bikel speaking at the September 1965 Eternal Light Vigil on the National Mall (he shares the stage with a man holding a twisted shofar); of 3-year-old David Sislen burying his face in tears in his mom Bonnie’s coat after a police officer removed the placard from his sign, which violated a rule prohibiting any signs within 500 feet of an embassy; and a youthful Senator John Kerry marching, arms locked, with colleagues and with Avital Sharansky en route to the Soviet Embassy demanding Natan Sharansky’s release.

Also of interest is the way the local community rallied around the cause, including churches and labor unions. Local theater Arena Stage was a “steadfast supporter of Soviet Jewry,” according to the exhibit site. (In this photo, two Arena Stage actors are pictured at the vigil.)

A particularly poignant picture shows Rev. John Steinbruck, of Luther Place Memorial Church, standing in front of his church directly below an enormous sculpture of Martin Luther. A sign in front of the reverend stats in bolded font, “Freedom for Soviet Jewry.”

The demonstrations were very important for the American Jewish identity, but they were “basically irrelevant to the history of the Cold War or the Jewish experience in the Soviet Union,” said Maya Balakirsky Katz, a professor of art history and Jewish studies at Touro College who has written on New York’s Jewish Museum and the Soviet Jewry movement:

“For American Jews, the Soviet Jewry movement gave them an alternative route to backseat Zionism through political activism,” Katz said. “As far as Soviet Jews, the focus on refuseniks is hardly representative of the Soviet Jewish experience, as these few folks were total outliers in the Soviet Union. Jews for Jordache Jeans would be more representative.”

A section of the exhibit website titled “Persecution Behind the Iron Curtain” notes that many Soviet Jews sought to emigrate and move to Israel following the 1967 war. “In response,” the website notes, “Soviet Jews found their exit visas were repeatedly denied, and applicants frequently lost their jobs or were imprisoned.” Katz agrees that there were many ways that Jews were marginalized, but she says in this regard, they were actually privileged.

“Jews were the only ones who could even dream of emigration under the premise of reunification of families,” she said. “No other Soviet citizens would have been able to enjoy that loophole.”