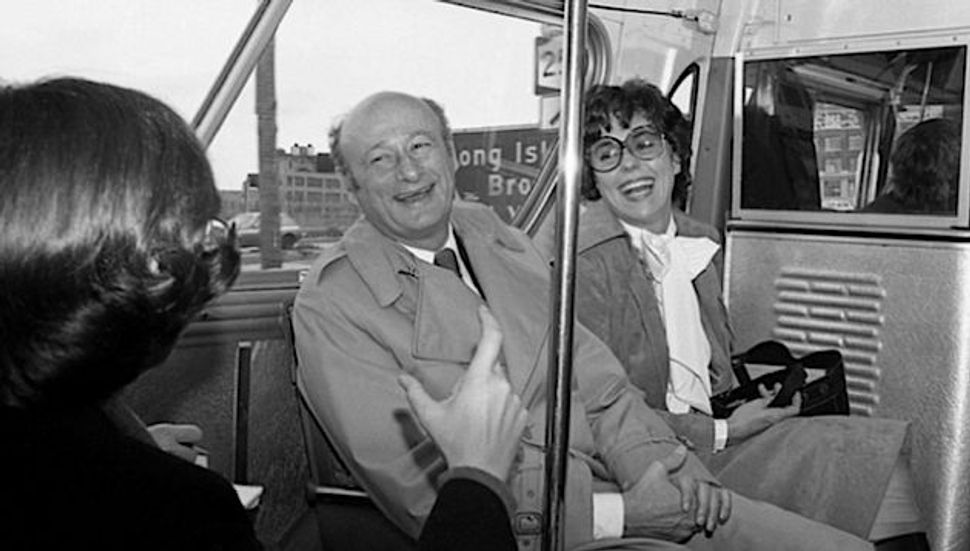 That Neil Barsky selected Ed Koch as the subject of his first film was far from an accident. Barsky spent his formative years in New York during Koch’s mayoralty (1978-1989), both as a high school student and later as a journalist.

The city was in the midst of desperate times. Crime was rampant and the Big Apple was running out of cash and time. Koch ran as a “liberal with sanity” on a law and order platform shortly after the 1977 blackout and ensuing riots; he easily defeated a passel of more liberal Democrats (Bella Abzug and Mario Cuomo, among them) for his party’s nomination and then won the election handily.

Koch was brash and combative in a New York City kind of way — at least in the way New Yorkers like to think of themselves. Barsky is a former journalist — he wrote for the Wall Street Journal and the New York Daily News — and he comes to filmmaking by a circuitous route. He ran a hedge fund, Alson Partners, named for his children, Alexandra and Davidson, but “retired from the hedge fund world” in 2009 when the market collapsed. After a brief stint teaching college-level economics, he self financed “Koch,” his first foray into the world of documentaries. The movie opened to near unanimous praise last year and will be broadcast September as part of POV’s 27th season on PBS.

Barsky spoke to the Forward about his life journey, why there was a time when Koch refused to speak to him and the Yiddishkeit in his life.

Curt Schleier: How did you go from hedge fund entrepreneur to filmmaker?

Neil Barsky: I wanted to re-engage with journalism, and documentaries are a form of journalism. I’ve always loved documentaries. A good documentary can make a contribution to the world’s understanding of everything.

I’m a New Yorker and in addition to wanting to make a film that was entertaining and engaging, told a story about contemporary New York. How did we get here? I chose the 12 years of Koch because I’ve come to believe with the benefit of hindsight — I didn’t realize it at the time — how fortunate New York was under Koch. Even though the Bronx was still a mess when he left, the seeds had been planted. The budgets were balanced and a $5 billion housing program had been initiated.

Still, you brought enthusiasm and money, but you had no experience as a filmmaker.

I had to hire people who understood that I was a first-time filmmaker and were willing to work with me and teach me. I got lucky when I found [producer] Jenny Carchman. She helped me find [director of photography] Tom Hurwitz an our editor, Juliet Weber, who took 100 hours of shooting and helped craft a story with me. I’m not saying there weren’t bumps along the way. But I felt comfortable with the fact that I could interview people. I had run a hedge fund, so I learned how to find talented people who didn’t mind having work delegated to them. Koch is exactly the film I wanted to make, though, obviously, it reflects the work and judgment of a lot of people.

How did you get to the mayor?

I approached [his chief of staff] Diane Coffey. I didn’t know her, but a mutual friend said “Talk to Barsky, he’s a decent guy.” [When we met] I told her more or less the film I wanted to make and she took me to visit Mayor Koch. I told him I wanted to do a film about New York and that I had few preconceived notions. We had some delicate issues to deal with in the beginning, but he didn’t ask for or receive any control. He’d dealt with the press long enough to know if you want something to be good it has to be independent.

That, and race. I told him as far as the gay issue, that we weren’t interested in reporting whether or not he was gay, but it was an important part of his biography and we would deal with it.

Was there something that surprised you about him?

We shot interviews with a black backdrop in his apartment. It’s exhausting. The light’s in your face, but he would never get tired. We would go on for three hours at a time and I would be wiped out, but he, at age 86, would never get tired, as long as the camera was on. You can see that a little in the film. Whenever we’re having lunch or dinner, if the conversation turned away from him, forget it. He would literally just stare at his plate. He was not good at small talk. I don’t think he knew I had kids until he met them. On the other hand, he was incredibly reliable. He held to his word.

Yet there was a time the two of you weren’t talking.

I had agreed to show him the film before we locked it down. At one point he said to me I want to see what you’ve got so far. But there had been some disruptions and we were delayed in the editing process. I think the whole time he trusted me, but was concerned that he might die before it came out and it would tarnish his image. I did show it to him later and he didn’t ask for any changes.

Are there any more films in your future?

I am now chairman of the Marshall Project, a non-profit journalism foundation intended to start a national conversation about criminal justice reform. I think the criminal justice system is ineffective, expensive and often inhumane and I think we over-criminalize many activities. We have a higher percentage of people in jail than any other country on earth. So we will be doing films. I will produce them. I can direct, but, man, let me tell you, that’s hard work. I love the medium. Look, we’re going to be on PBS and seen by millions maybe hundreds of thousands of people. So I definitely feel there are a lot of criminal justice films to be made.

I had a bar mitzvah. I lived a year in Israel on a kibbutz and speak Hebrew. I wouldn’t call myself religious. I’m a Reform Jew. My kids go to Hebrew day school and I care deeply about what’s going on in the Middle East. I identify with Israel. There’s a lot of Yiddishkeit in my world.

Do you bring any of that Yiddishkeit to your work?

I had a very liberal upbringing. My parents were both involved in the civil rights movement and both identified as Jews. It’s difficult to pinpoint these things; it’s a composite of different forces, I would say being a New Yorker, a Jew with an interest in social justice is all entwined in what I do.