The ‘Idiotest’ Funnyman Around: An Interview with Ben Gleib 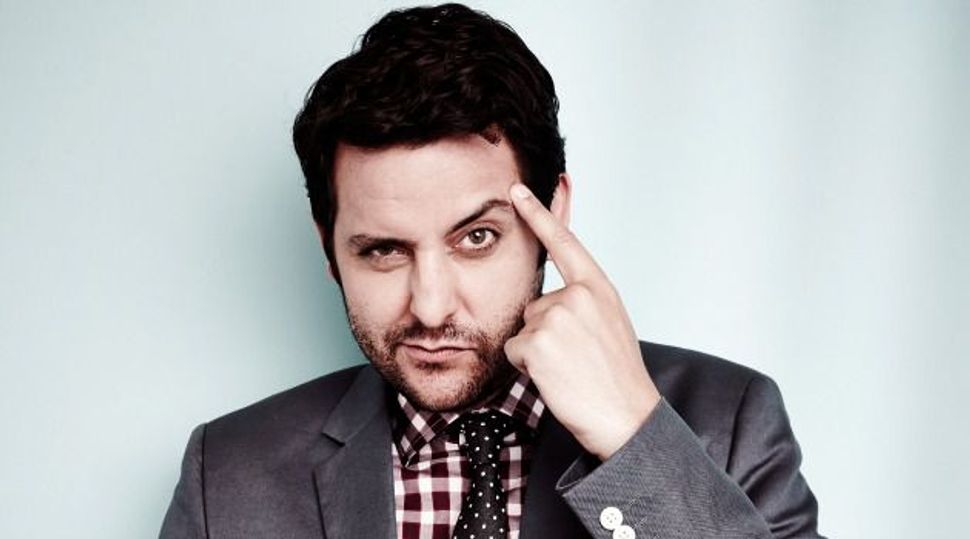 You might know comedian Ben Gleib from his regular appearances as a round-table commentator on “Chelsea Lately,” or from his podcast, “Last Week on Earth With Ben Gleib.” Perhaps you’re familiar with his work on NBC’s “The Real Wedding Crashers” or with his stint on the same network’s “Last Comic Standing.” But now, the 36-year-old Los Angeles native and funnyman, née Ben Nathan Gleiberman, has a new title: game show host.

Named by Esquire magazine in 2007 as one of “the six comedians who could be comedy’s next big thing, ” Gleib started duties as host on Game Show Network’s new show “Idiotest,” gently and not-so-gently poking fun at contestants as he guided them through a series of brainteasers.

On a more serious note, Gleib spoke candidly about the Israeli-Palestinian war on his podcast this past summer, severely critiquing Hamas and lamenting the loss of life on both sides of the conflict.

The Forward’s Margaret Eby caught up with Gleib to chat about the end of “Chelsea Lately” and about the idiocy of everyday life.

Margaret Eby: You just appeared on the last installment of “Chelsea Lately.” What will you miss most about the show?

Ben Gleib: It was the time of my life doing “Chelsea” for the last seven years. I’ll miss the privilege of going on international television and introducing my comedy to the world. It was so immediate and unscripted and raw, and it’s such a rare thing to have. Chelsea [Handler] has the fastest wit on TV; she’s such a raw, honest and unforgiving person. It was a lot of fun to spar with her. And to take my fair share of abuse, which keeps me humble.

Would you have Chelsea Handler on “Idiotest”?

I would love to have her on the show. I have not given her any of these tests yet. I bet she’d do well. But maybe I will, just to see what she gets wrong. There’s nothing like revenge.

What was the transition to game show host like?

I didn’t have to prepare for it too much. I’m a fan of TV, and I grew up on game shows. Plus, Game Show Network was very supportive of me being me. They kept saying, “Don’t cut your hair, don’t change who you are.” I got to improvise every episode. I got to just be me, be playful and make fun of people. The hardest part was just shooting all the episodes very rapidly and wrapping my head around learning all the tests every day.

I read that you took the quizzes on “Idiotest” before the contestants did. How did you generally do?

I did very well, I was surprised. I would usually not miss any questions, which gave me the confidence needed to eviscerate contestants.

Do you spot things in your daily life that you wish you could integrate into the show?

The way girls look at me. I think that they like me, and I’m usually very wrong. That is the “idiot test,” and I am the idiot.

If you could be a contestant on any show — game or reality or whatever — which show would it be?

Hands down, “Jeopardy.” I tried out for the teen tournament as a teen and did not get chosen. I’m still bitter about it. I might grow a mustache to face down [Alex] Trebek. I’m definitely not smart enough to be on real “Jeopardy.” Maybe the celebrity version.

Is there an idiotic behavior you wish you could correct?

I wish that I could make people stop caring so much about proving that their version of history is correct, or that their own religious history is the only correct one. Even if you’re right, it makes no sense logically. It’s better to realize no one is 100% certain. We’re all the same, we’re all people, we all want a happy life.

Ha! Well, I also have a smaller thing I wish I could fix. It really bothers me when you ask for an ETA and people instead tell you, “Oh, I’m almost there!” or tell you anything but an actual time amount. I don’t need your commentary. It’s like when you ask the time and people say that it’s 45 past the hour. You’re making a real assumption about what hour I care about there.

I’m filming my first hour-long standup special in September. I have these cool-looking dustproof goggles and a fur vest, these very strange pants I would never wear in real life. It’s going to be a good time.

The ‘Idiotest’ Funnyman Around: An Interview with Ben Gleib