Saying Goodbye to Rabbi Krustofski on ‘The Simpsons’ 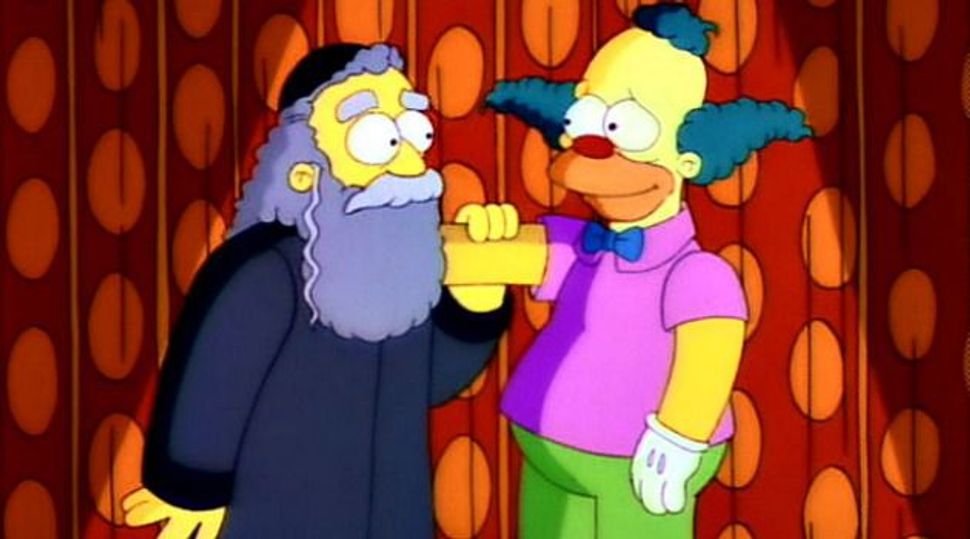 You may have heard by now (and if not, SPOILER ALERT) that there was a tragic death on the last night’s premiere of “The Simpsons.” Rabbi Hyman Krustofski, on-and-off estranged father to Krusty the Clown, has left us for the magical shul in the sky known as “Jewish Heaven.” He was 74 years old.

Voiced by comedian Jackie Mason, Rabbi Krustofski was born and raised in the Lower East Side of Springfield (state still unknown). There, he raised a son, Herschel Shmoikel Pinchas Yerucham Krustofski — better known by his chain-smoking children’s entertainer persona, Krusty the Clown.

Like many a father before him, Krustofski’s dreams of his son following in the family business were dashed when Krusty expressed his desire to become a clown. Unable to accept his son’s decision, Hyman disowns his son and the two are estranged for many years.

(Fun fact: Jackie Mason is descended from a long line of rabbis, and broke with tradition to become an entertainer.)

It takes the combined efforts to Bart and Lisa Simpson to reconcile father and son. In 2003’s “Today I am a Clown” Krusty decides to have a midlife bar mitzvah. Hyman is thrilled — until Krusty, perpetual attention-whore, decides to televise the event in a comback bid.

“Krusty the Klown’s Wet ‘n’ Wild Bar Mitzvah” is a big hit, but Krusty decides to salvage his relationship with Hyman by having a second, more meaningful bar mitzvah at Temple Beth Springfield.

Hyman also appeared in “Once Upon a Time in Springfield,” in which he was to preside over Krusty’s 15th wedding to co-host Princess Penelope. Ultimately, the ceremony gets called off, but not before Rabbi Krustofski slips in an intermarriage joke:

“Friends, loved ones,” he says “we are gathered here today to marry a Jew and — a Congregationalist? Is that even a thing?”

As befits any Jewish patriarch, Krustofski died mid-sentence, guilt-tripping his son; his last words to Krusty were: “If you want to know my honest opinion of you, you’ve always been… eh.”

Saying Goodbye to Rabbi Krustofski on ‘The Simpsons’