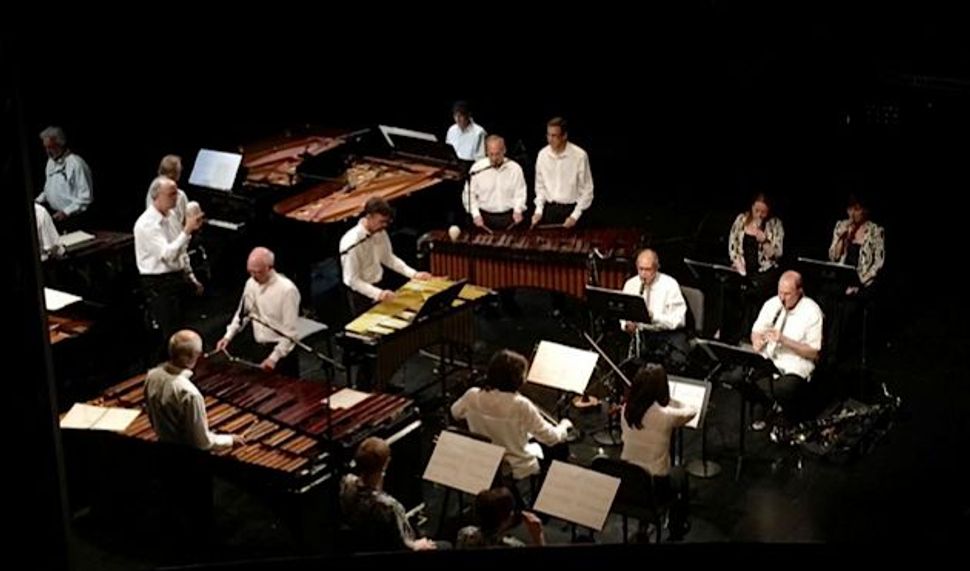 “Hiney ma tov u’ma-na’im shevet achim gam yachad.” “How good and how pleasant it is when brothers sit together.” That campfire classic came to mind as I sat in the Gilman Opera House at the Brooklyn Academy of Music earlier this month for the second of three concerts featuring Steve Reich and Philip Glass.

The two pioneering composers were appearing onstage together for the first time in nearly 40 years as part of “Nonesuch Records at BAM,” a series marking the 50th anniversary of the influential label, which ran from September 9 to 28. Nonesuch, whose founding mandate was to produce “fine records at the same price as a trade paperback,” has nurtured and promoted an extraordinarily wide and genre-crossing range of composers and musicians, from George Crumb to the Gipsy Kings, John Zorn to Wilco.

Both Reich and Glass studied composition at Juilliard and honed their musical styles in the downtown New York arts scene of the 1960s. In that symbiotic atmosphere their music, often performed in lofts and clubs, developed along similar paths. The result was what is now known as “minimalism,” a term coined by the composer — and fellow minimalist — Michael Nyman, although neither composer embraces the designation.

Reich prefers “music as gradual process,” while Glass calls what he does “music with repetitive structures.” In any event, the book on the Jewish contribution to minimalism, which has much to do with stripping away the accumulated complexity of early 20th century music (Schoenberg and Stravinsky in particular) and reclaiming melodic and rhythmic structures of earlier musical traditions — as well as ones belonging to non-Western cultures — has yet to be written.

“No one will know what I went through as much as Steve does, and Steve can say the same thing about me. I was with him when he was making those early pieces. I was watching him go through the discovery of a language,” Glass told The Wall Street Journal earlier this month. The two went on a European tour in 1971, performing each other’s works in Paris and London. Shortly afterwards, their personal and professional relationship soured, allegedly over issues of credit and copyright, although the exact reasons have never been publicly disclosed.

The performance I attended featured a lopsided program that presented Reich in a far more positive light than his exact contemporary (the two men are 77 years old). Serious and demanding works by Reich were pitted against excerpts from longer Glass pieces and well-known soundtracks (including Godfrey Reggio’s cult hits “Koyaanisqatsi” and “Powaqqatsi”). Simply put, the concert reinforced the cliché about Reich the rigorous intellectual versus Glass the popular, often ecstatic composer of endless film scores and TV spots.

Putting questions of merit aside, the naked fact is that Glass is the most popular living composer of serious music. As the critic John Rockwell once put it, “For all its conceptual ingenuity and technical skill, Glass’s music had won an audience because people liked it.”

At BAM, the undisputed highlight was a fiercely controlled performance of Reich’s hour-long opus “Drumming,” which features a dozen performers alternating between bongo drums, marimbas and glockenspiels, with additional parts for piccolo, female voices and a whistler.

The best of the crop for Glass was the slow bluesy saxophone cadenza “Building” from “Einstein on the Beach,” his legendary collaboration with Robert Wilson. The two other concerts, which featured more rigorous Glass works, including “Music in 12 Parts” and the “Funeral of Amenhotep III” from the opera “Akhnaten,” seemed sure to cast Glass and his accomplishments in a far better light.