Paul Reiser Returns to the Stage 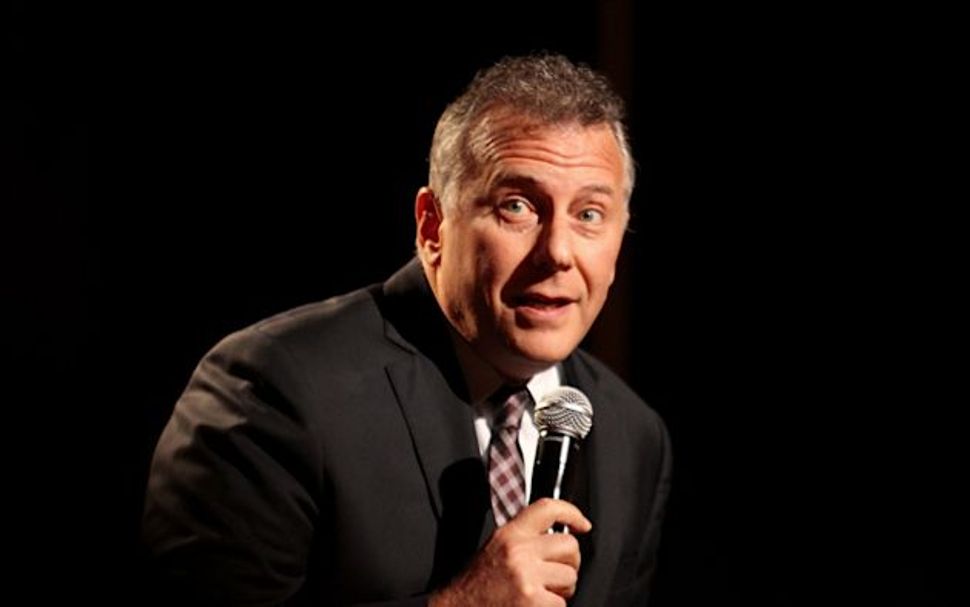 Paul Reiser is coming to Manhattan to make his first New York appearance in over two decades. He’ll be appearing October 2 at Merkin Concert Hall in a benefit for JazzReach, an organization that sends musicians to schools around the country to perform jazz for students.

The comic is most famously the star and creator of the long-running sitcom “Mad About You.” He’s also had important roles in films ranging from “Diner” — his first big break — to the “Beverly Hills Cop” movies. He’s also a talented musician and composer with a bachelor’s degree in music and an album to his credit.

For Reiser, it’s a quick visit to his hometown. “I am flying in Thursday and flying home Friday to commence not eating and getting those pots not cooking so I can not eat,” he said.

“In fact, the peanuts on the plane may be the last thing I eat, so I better enjoy them. Now that Yom Kippur is upon us, I don’t think I’ve done anything wrong this year. I have 48 hours to mess up. I should jump into a life of crime, so I have something to pray about. I have been pristine this year.”

Reiser spoke to the Forward about his return to his standup roots, coping with disappointment, and the pre-bar mitzvah conversation he had last year with his son.

Curt Schleier: What made you return to the grind of standup?

Paul Reiser: I hadn’t performed for about 20 years. When “Mad About You” started I put it on the back burner and when the show was over I was just tired and stayed home. In my head, it was something I always intended to do, but I kept kicking the can forward.

I was MC-ing a charity event — you just do five minutes and introduce people — and when I got off the stage I realized I really miss that. To give you an idea of how long it had been since I’d done standup, I called up a club here [in L.A.] and asked if it would be okay if I came down and tried out some material. They said sure, come down anytime. The show starts at 10 o’clock. I said, “At night?” I had to re-shift my body clock, because 10 o’clock was a little late for me. But I instantly remembered why I loved doing it. It was very much the same challenge as when I first went on stage when I was 19. In a world that has changed so much, doing standup is one of the few constants. Your subjects may have changed, but the act itself is the same, just standing on stage every night until it gets better. I love the simplicity of it.

If your professional life were a graph, it would be an almost straight vertical line up — with one exception. That was “The Paul Reiser Show” that aired for just a couple of episodes. After all your success, did you have a problem dealing with that?

The truth is what happened was a [personnel] shift. The people who bought my show and were behind it all left because the network was sold. The new guy came in and [the show] really fell through the cracks. They told me, “We don’t have a lot of money to promote it,” and I said, “Just put it on.” Well, they didn’t promote so no one saw it and they said, “Hey, it’s not doing well.” We already knew that. The truth is it’s a miraculous accomplishment for something to be a hit. You have to overcome a lot of opportunities to be killed. Countless shows and movies do everything right and don’t make it. The person who creates these things had to separate the work from the reception. If people don’t like it, it’s one thing; if they don’t see it, that’s another. It was a great show.

You were a yeshiva bokher, attending the East Side Hebrew Institute. How did you get into comedy?

I was Jewish, so was already half way there. I grew up loving standup, but I didn’t know how you could do it. I just thought some people were comics. My father was old school. The only time you go into show business is if you need to get out of hard times. Then you become a boxer or an entertainer. Who else would go into show business? My father was a businessman and always felt I would follow in his footsteps. I was lucky. When I was coming of age all these comedy clubs were opening.

Is the age of the Jewish comic over? I don’t really see many young Jewish comedians out there.

Really? They’re out there. The field has opened up. It’s not exclusive, if it ever was. I think the era you’re thinking of, well the Catskills are no longer. But they’re there, but they’re just not playing to the same sensibilities you recall. They’re not talking about the immigrant experience.

What about your own Jewish background?

When you have kids you think about what it is you want to turn over to them. My second son just had his bar mitzvah last year. He’s really smart and he said to me, “I don’t know if I want to do a bar mitzvah. I don’t know if I believe in God.” I told him that’s okay. Jews have been questioning God since the very beginning. I asked him what he liked about being Jewish, and he said the brisket and that they’re funny. I told him that was fine. Religions have been built on less than that. A lot of Judaism is cultural. What people warm up to is the familiar and the familial, and when I hear my kids quote Mel Brooks records, it’s as warm to me as if they quote the Torah. Quote Mel Brooks and Allan Sherman and I’ve done my job well.

Paul Reiser Returns to the Stage