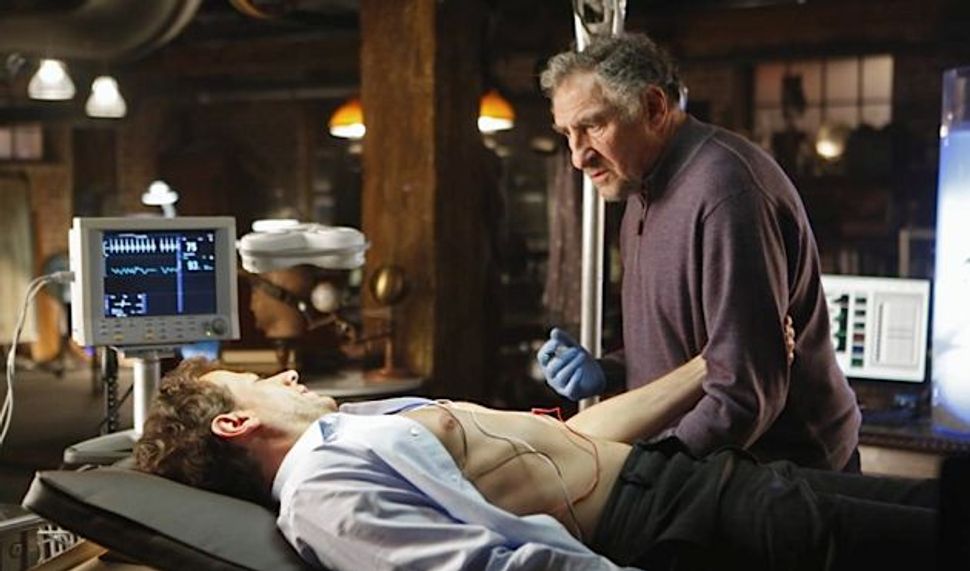 Judd Hirsch has packed a lot of success into his 79 years on the planet. He is of course known as Alex Rieger, cabbie extraordinaire in the long-running television sitcom “Taxi.” The role earned him four Emmy nominations and two wins.

He’s also starred in a number of other successful series, including “Dear John” and, more recently, “Numb3rs.”

That’s only television. He’s appeared in 20 feature films, ranging from his role as a psychologist in “Ordinary People” (Academy Award as Best Supporting Actor) to playing himself in “The Muppets,” which garnered him no awards but the affection of thousands of young people.

Then there is his true love, theater. He’s appeared in three Broadway productions, was nominated for three Tony Awards as best actor in a play and won two — for “I’m Not Rappaport” and “Conversations With My Father.”

Hirsch spoke to the Forward about his latest project, the new ABC series “Forever,” how he almost didn’t want to take “Taxi” and why he’s still doing the grind of a TV show at age 79.

Curt Schleier: Getting ready for this interview, I was taken aback by how much you’d done and how much I’d forgotten. What a career! What’s your reaction to my ignorance?

Judd Hirsch: As I get older I expect people to remember everything I’ve done, though most people remember just the most current, not the thing you loved the most, which for me was theater.

On the subject of being taken aback, I was really surprised at how much I enjoyed “Forever.” It’s about a New York medical examiner, Henry Morgan, who through some magical event is now immortal. You play Abe, the concentration camp survivor that Henry and his now deceased wife raised from infancy. You are the only one who knows his secret.

It’s interesting, because he is my father. I’m now 70 years old, but he’s never changed. He’s my father, so my concern for him is understandable. The character is very much like me, so I’m pretty sure that’s why I got the part.

This is not the first time you’ve played a New York Jew. Has having that look and sound helped or hindered your career?

It helped a tremendous amount, because that’s how I finally got into television. [My first series] “The Law” was a total New York story that they shot in Los Angeles. It started as a back door pilot [television movie] and they were looking for a fast-talking New York Jewish guy for the lead.

It briefly became a series, didn’t it?

The [network] finally [ordered] three episodes, because they didn’t think it would last. They were afraid it was too smart, too clever, too well written for television audiences to catch.

What are your thoughts?

I think television should lead. The audiences, they’ll go with you. Like “Forever.” It’s a very unusual crime story. It isn’t only about crime. It has three wonderful elements: the man who cannot remain dead; that there’s someone like him out there tormenting him and his chemistry with a female detective, and how they will continue without him being able to make a relationship.

You starred in one of television’s iconic comedies, “Taxi.” How did that come about?

I didn’t want to do it. I’d just gotten off a series [Delvecchio] and I had a young son. I wanted to take time off and take him to Europe. Also, I’m really a theater person. When my agent told me about this thing I asked him for a copy of the script. When I read it, I said, oh crap. I was already 42 years old, and if I do it, it will be at least three years. I could see how funny it was. And it was right down my alley. So I told my agent, make them an offer they can refuse, but they didn’t. So I really got stuck.

I was a bar mitzvah. I went to Hebrew school in the basement of the apartment building across the street. We were poor. We had the party in my apartment. My brother was more fortunate. He had a bigger party at the synagogue.

Do you bring any of that to your work?

It gave me the opportunity to play people like the lead in “I’m Not Rappaport.” That was a prize. A gift. Here take this and put it in your pocket. I really understood that man, because I think Jewish people have a way of remembering more than life. My first visit to Israel was incredible. I had this feeling that I could walk these grounds because I belonged here. This is my ancient history and I’m walking right into it. By being that way, I think you can play almost anything.