Does ‘Money Grubbin’ Play Need To Be Jewish? 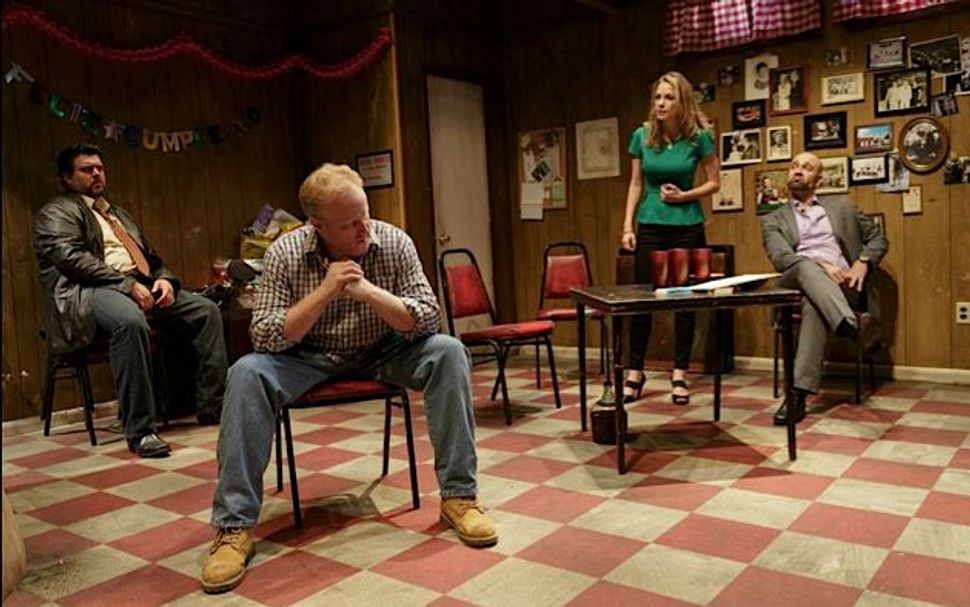 There is a good play lurking within Sean J. Quinn’s “Money Grubbin’ Whores.” More’s the pity.

“MGW” takes place in the basement of what appears to be an old pizzeria in what is now a Hispanic neighborhood. There will be a kid’s birthday party there tomorrow. A banner reading Felíz Cumpleaños is on the wall and a candy-filled piñata hangs from the ceiling. But today, this party room will serve as an unlikely divorce settlement room, rented for the occasion with just the promise of buying a pie.

First to enter are Matt (Adam Mucci) and Frankie (James Andrew O’Connor). Matt is a plumber and in the process of divorcing his wife, the supposed title character. Frankie is his life-long friend and a paving contractor who considers himself a “dealmaker.” He is going to help Matt and his wife end their marriage in an amicable and financially stable way.

It’s a difficult chore, because Matt is angry. Very angry. He’s angry because whenever he sees his wife she’s wearing new clothes, short dresses and push-up bras. “And she’s smiling all the time. She looks like she’s trying to be very happy. And she knows I’m not.”

Also, Matt feels his wife turned their daughter against him. The last time he saw her, Matt asked for a hug and she just stared at him.

And, finally, there is the money problem. His wife’s new look is apparently expensive. The push-up bra cost $175. All she wants, Matt feels, is his money.

His anger seems understandable, if poorly expressed in expletive-filled tirades. It is a constant stream of “F” and “C” words that may be true to how an angry plumber might speak, but are overwhelming in the context of a play. They soon become numbing and distract from what is supposed to be a dark comedy.

When Matt’s wife, Aviva (Carmit Levité), and her cousin, Moshe (Penny Bittone), finally enter, a different picture begins to emerge. It’s not money problems that drove them apart, but Matt’s anger and rage. It is also what drove his daughter from him. She was afraid of him, Aviva says.

Also, Aviva had a job, as an assistant editor for Travel & Leisure magazine. Matt made her quit; she wanted to work.

There is much to praise here. American theater doesn’t often deal with the problems of working stiffs. And anyone who has even a little blue in his or her collar will recognize the frustrations of many in the 99%, trying to earn a living sufficient to keep hearth and family in a modicum of comfort.

I know people for whom the American dream has turned into nightmare, whose frustration boils over.

Unfortunately, the characters are more caricatures than fully realized people. They are wisps in the wind, bending every which way to please the plot. Frankie sometimes offers extremely wise council and seconds later seems unable to pronounce Moshe’s name. His variations (including Mooshu) are one of the few lines that generate any laughs.

The staging also seems artificial. The downstairs room has a bathroom people enter just so others can move the plot forward.

But my biggest problem with the play is that Aviva is an Israeli Jew. Google “Money Grubbin’ Whores” and before you can finish the second word we know what comes up. It is an unnecessary distraction, particularly since Aviva’s Judaism is immaterial to the story.

Playwright Quinn was a stage electrician and engineer. According to his bio, he’s still a lead engineer. This seems to be his first produced play and it is a praiseworthy and promising effort, all things considered. But it could have been more.

”Money Grubbin’ Whores” is currently at the Lions Theater in Manhattan.

Does ‘Money Grubbin’ Play Need To Be Jewish?