Filming the Wives of Bali 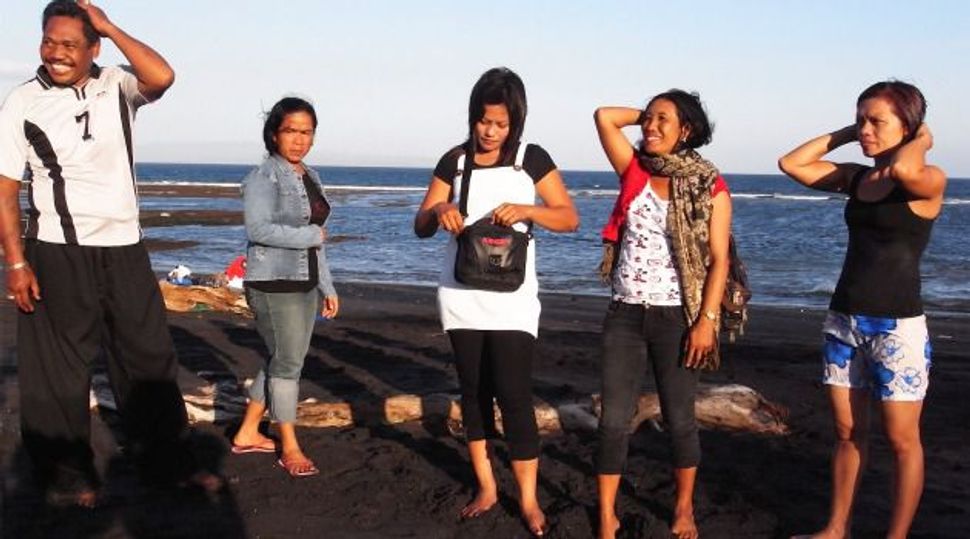 Filmmaker Robert Lemelson’s “Bitter Honey” is a documentary about polygamy and violence towards women in Bali, Indonesia. Lemelson filmed three families — three husbands, 17 wives and 20 children — over a seven-year period. Many were tricked into being co-wives and are psychologically manipulated and physically abused by their unfaithful and often cruel husbands once they are married. Feeling trapped for economic and cultural reasons, they remain with their husbands despite their grim conditions. It is fascinating and heartbreaking to watch them open up to Lemelson about their ongoing plight: their fear and sadness.

The Forward’s Dorri Olds caught up with him in New York City, at the Clinton Global Initiative, with which he has been involved for the last 5 years.

Dorri Olds: How did a nice Jewish boy from New Jersey end up in Indonesia?

Robert Lemelson: As an anthropologist, you pick a place to work. I spent a lot of my time in my 20s in Asia. When I went back to graduate school in my 30s, I was doing a project on the relationship between culture and genetics in mental illness. People with schizophrenia actually do better in the developing world, and this is a puzzle. A place like Nigeria or India or Indonesia has very few health care dollars devoted to treatment of psychiatric disorders, yet people in these places, with these problems, seem to get better more quickly. They return sooner to family and work and have fewer hospitalizations there than here. I went there to explore why this could be. It certainly wasn’t a function of genetics, and had to have something to do with how these people were treated. That took me years to work on. In fact, I’m still working on that. I lived for several years in Indonesia in the mid-’90s as a Fulbright scholar. I’ve been committed to it and keep going back. I’ve been studying there for the last 20 years. My son and daughter spent the early parts of their lives in Indonesia. My daughter was 6 months when we went there, and my son was 4 years old.

Before seeing your movie I had no idea how bad it was for women in Bali. What inspired this documentary?

Bali is not typically associated with these women’s issues. Bali is best known for premier cultural tourism, which the Balinese have cleverly marketed, particularly in the past 20 years. It has become a tradition to go see Bali’s beauty and rich culture of music and dance. Bali does have all these things, but like any other society Bali has problems. I got the idea of filming in 1997, when a colleague of mine filmed some of my research. So from 2000 to the present I began filming my research. I shot about 10,000 hours of footage and made a dozen films on a range of social issues of significance, such as the 1965 mass killings in Indonesia, when upwards of a million people were killed. We did the first film that documented family life during that period. We did a six-part series on mental illness in the developing world, called “Afflictions.”

We did a film on the sex trade, about how children get trafficked. Beginning in 2008 we started this project on gender-based violence and polygamy. Initially it was not a project on polygamy per se. The dictator Suharto ruled Indonesia from 1966 until 1998 when he fell during the Asian economic crisis. After his fall there was upheaval in Indonesia, including a series of mass rapes, some of which were attributed to Suharto’s forces. My activist friends said, “After you’re done with what happened in and after 1965, you really should do a project on what happened to these women.”

So we started a project on sexual violence and terror. It turned out to be quite difficult. The women who’d been traumatized and abused were too afraid and too ashamed to talk. I realized I’d probably have to spend several years in Jakarta just getting to secure their trust, and I wasn’t able to do that. But, as an aside of that period, we’d already done interviews with other women who were victims of gender-based violence; and several of these women were in polygamist marriages.

I speak Indonesian, so that probably made them more comfortable and willing to talk to me about these difficult subjects. You get people to talk to you by being ethical, behaving properly, being fun to be with and showing an interest in their lives.

The first time we met the women in “Bitter Honey,” they told us stories about how great their lives were and how great their marriage was and there were no problems. We went back a year later, and that was when they began to trust us. It’s a cautionary tale for filmmakers. You can’t spend two months somewhere and be able to know what it’s like. The women finally opened up to us after we’d spent years developing relationships with them that were built on trust and respect and compassion.

Were the women afraid that their husbands would beat them if they spoke to you?

That’s a very good question. We realized that the material was very revealing and not complimentary for the husbands, so we spent a lot of time thinking through how to do no harm or protect the women from potential fallout of the film. We had discussions about what happens when your husband sees himself in the film. In addition to having meetings on how to manage that, we hooked them up with global resources such as the female lawyer in the film and other women of power in Bali. We also alerted local authorities that would be monitoring what was going on. We learned that the husbands were accepting their representation in the film and there hasn’t been what you’d call blowback for the wives. The wives are now helping with screenings around Bali and testify to the accuracy of the film.

Do you think the Balinese women will ever get together like suffragists did here?

We’re working with activists and psychologists to set up the first gender-based violence policy. We are providing fundraisers for the film, and resources to help get this off the ground. There is a gender-based violence advocacy treatment program in Jakarta but nothing in Bali, so we’ve put in a lot of effort to get that going. Hopefully, as the film premieres over the next few months, there will be the beginnings of an advocacy center. We hope by this time next year that will be in place. We’ve put out proposals that would provide advocacy, legal representation and psychological counseling. I think there is a lot of hope for this movement. A women’s rights movement is quite vibrant in Indonesia, much of it centered in the capital, Jakarta. There are movements in Bali to address some of these problems. As an anthropologist it’s a little bit problematic for me. One of our central tenets as anthropologists is that we’re not supposed to judge or try to change what we’re seeing. But after you work long enough in a place and understand it, you can start to take more moral and ethical stands, which always respects local differences and becomes an agent of change. That’s not a typical position in anthropology, but I think after doing this for several decades you begin to have an authority.

Do you think the men, after seeing the film, have gotten any more understanding that what they are doing is cruel?

I think there is consciousness-raising among the men. Seeing yourselves represented negatively in the eyes of others, I have to imagine that has some degree of influence. In the film, Sadra, a husband with two wives, certainly seems to have some guilt, at least on the surface, about what he’s done. In the process of the filmmaking he stopped beating his wives. We had confronted him; we had these meetings. That doesn’t mean that he isn’t still psychologically and verbally abusive, but the physical abuse seems to have stopped. I think we can say that was in part due to the filmmaking process. With Darma, who has five wives, I’m not so sure. His violence is no better. He uses his violence as a weapon of power. With Sadra the violence has a more pathological dimension. I do hope that the process has begun to alter things towards the positive.

We’re engaged in a few films right now. One is about two physicians who were in the Vietnam War together. One was a conscientious objector, and the other was in a surgeon unit. They were basically on opposite sides in the war but came out and did these remarkable things for the Vietnamese. It’s about how you can transcend really difficult circumstances and make a significant change in the world.

Filming the Wives of Bali