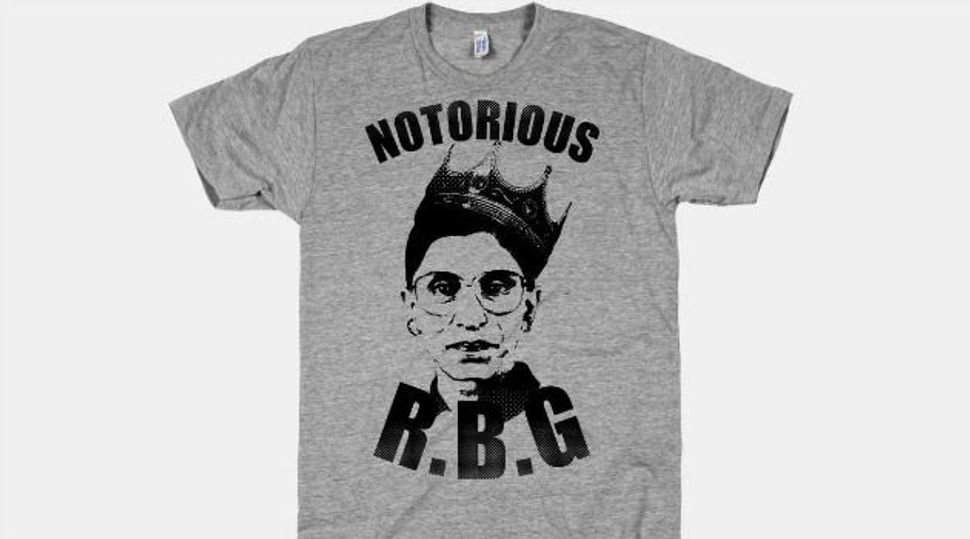 Ruth Bader Ginsburg knows she’s badass. She’s got the t-shirts to prove it.

At an event held at the 92nd Street Y on Sunday night, the Supreme Court justice explained that she has “quite a large supply” of t-shirts showing her face and the slogan “Notorious RBG,” referencing rapper Biggie Smalls, also known as The Notorious B.I.G.

During the interview with NPR’s Nina Totenberg, Ginsburg said she gives them out as gifts to her friends:

Totenberg: On a somewhat lighter note, I want to ask you about the Notorious RBG t-shirt.[Applause, Cheers]. I gather there are some people he who’ve worn them. I wear mine on the weekends all the time. And people will occasionally—The guy at the drug store said to me last weekend, he said, who is that woman, she looks very familiar, but who is she? I said she’s a Supreme Court justice. He said, oh good, I’ve learned something today. So how did you find out about the notorious RBG t-shirts.

Ginsburg: I think a law clerk told me about this tumblr and also explained to me what Notorious RBG was a parody on. And now my grandchildren love it and I try to keep abreast of the latest that’s on the tumblr. I have—and in fact I think I gave you a Notorious RBG—

Totenberg: Two of my three. I bought one.

Ginsburg: I have quite a large supply.

Totenberg: Do you have the one—what’s the one ‘you can’t have truth without Ruth’”

So, Ruth… I guess mine just got lost in the mail?