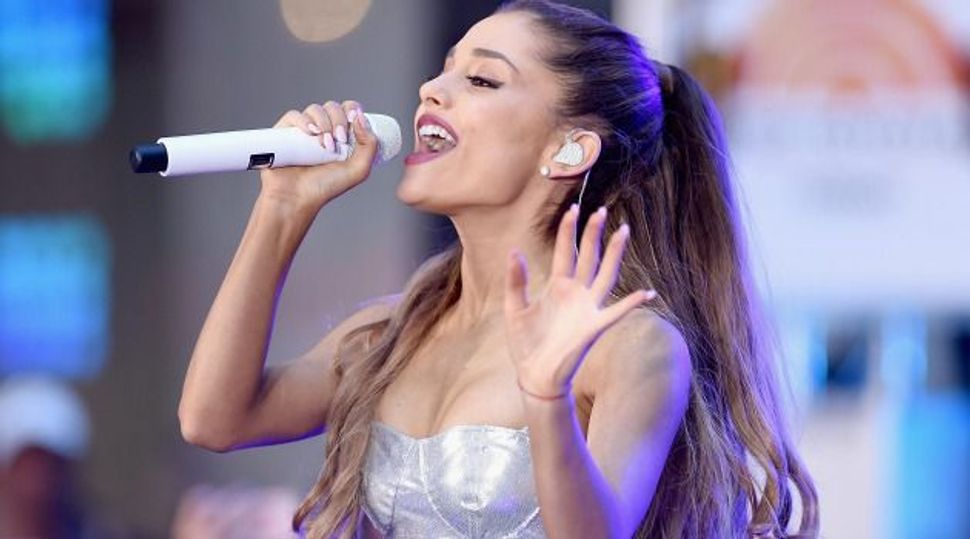 And so, another pop star jumps on the Kabbalah bandwagon.

Move over, Ashton and Madonna — this time, it’s Ariana Grande’s turn to spill the beans on her connection to the Jewish mystical practice. The former Nickelodeon darling told the Telegraph that though raised in a Catholic home in Boca Raton, Florida, she turned to Kabbalah in her teens because of the Church’s stance on homosexuality. Her brother, Frankie, whom she “adored and worshipped” growing up, is gay.

“When my brother was told that God didn’t love him I was like, ‘OK, that’s not cool,’” the 21-year-old said. “They were building a Kabbalah centre in Florida so we both checked it out and really had a connection with it. Since then my life has unfolded in a really beautiful way, and I think that it has a lot to do with the tools I’ve learnt through Kabbalah, I really do.’

Asked what she means by “tools,” she answered:

“You have to watch your intentions, make sure you’re not giving in to your ego. You have to numb your reactive state. You have the power to change your reality,” she says, clapping her hands together. “You have to take a second and breathe and reassess how you want to approach or react to a situation or approach an obstacle, or deal with a negative person in your space. That takes a lot of self-control and practice and, I guess, willpower,” she concludes with an embarrassed laugh.

Maybe she and Britney can bond over growing up to be pop stars with big bouncy ponytails, and their love for red string.