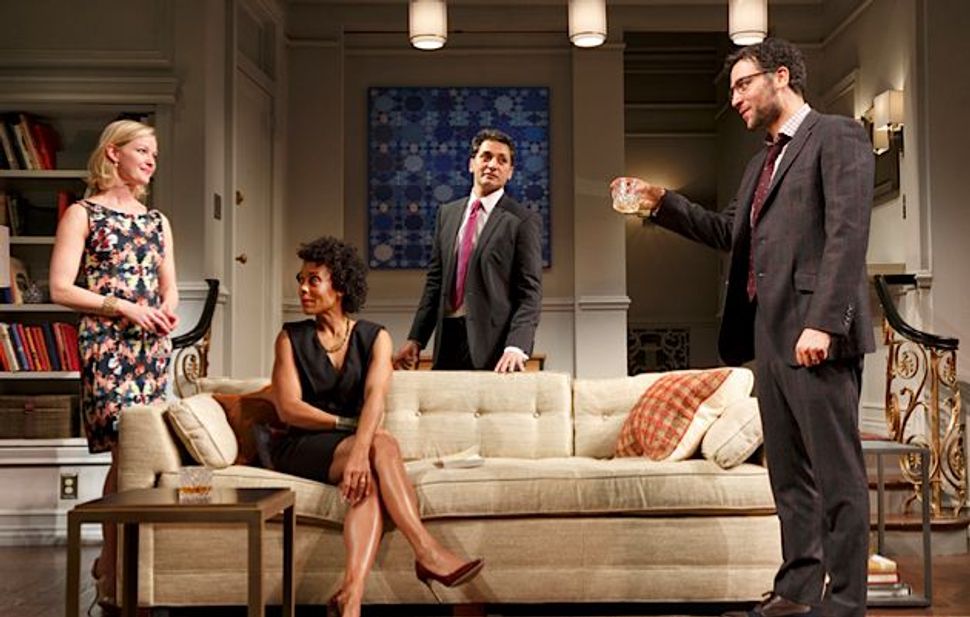 “Disgraced,” which opened October 23 at Broadway’s Lyceum Theater, is breathtaking.

There are moments when the entire audience gasps at something so surprising or disturbing on stage, it’s as though all the air is sucked out of the room. Those gasps, however, are the only sound the audience makes throughout this intellectually and emotionally engaging 90-minute production.

It’s set in a lavishly furnished Upper East Side Manhattan apartment. Amir Kapoor (Hari Dhillon) is posing for a portrait painted by his wife Emily (Gretchen Mol). She was inspired by a Velazquez painting of a slave and their dinner the evening prior. The waiter kept staring at them, the gorgeous blond American princess and this brown-skinned man.

Amir was used to it. In fact, he’d conquered the prejudice. He is a successful mergers and acquisitions attorney working for a Jewish law firm. His boss and mentor, Mort, befriended and depended on him, and Amir sees a partnership in his future.

But all is not as it seems. Kapoor is not his real last name. It is Abdullah. While he claims his heritage is Indian (and presumably Hindu), his family emigrated from Pakistan and is Muslim. But he is not.

He was in the sixth grade when his mother discovered his crush was named Rivkah. “I’ll break your bones,” she tells him. “You’ll end up with a Jew over my dead body.” And then she spit in his face.

Amir, who claims he didn’t exactly understand what a Jew was, confronted Rivkah the next day. And when he learns she is in fact a Jew, he spits in her face.

He tells the story to his nephew, Abe Jensen (Danny Ashok), who changed his name from Hussein though, unlike Amir, he still clings to his faith. He wants his high-powered uncle to defend Imam Fareed, imprisoned under the Patriot Act for allegedly funneling money to terrorists. While the Imam has good attorneys, “he’d feel better if there was a Muslim on the case, too.”

Emily supports Abe’s position and doesn’t understand her husband’s rejection of his birth religion. “There’s so much beauty and wisdom in the Islamic tradition,” she tells him.

Despite their entreaties, Amir seems unmoved, but ultimately succumbs, perhaps out of weariness, but more likely a deep-seeded affinity with his past. That visit will, ultimately, unravel his comfortable and tidy life.

He tells a New York Times reporter covering the hearing that the government has no case against Fareed. The reporter quotes him accurately, but identifies him and his law firm and makes it appear as though Amir is working for the defense.

That draws the attention of his bosses, and starts a downward spiral not only in his career, but in his life, as well.

It all comes to a head a diner party several months later. The Kapoors are hosting Isaac (Josh Radnor), a curator at the Whitney Museum, and his African American wife Jory (Karen Pittman), an attorney whom he mentored.

The evening starts off well. Amir and Jory discuss goings on at work. Isaac officially announces he will include Emily’s Islamic-inspired art in an upcoming exhibit. They joke about Amir’s penchant for $600 dress shirts.

But somewhere over the fennel salad, the conversation veers into dangerous territory, with Amir attacking Islam and ironically, Isaac, the Jew, defending it.

What is most fascinating here is that in the service of art Amir gets to say things many people — rightly or wrongly — believe but are afraid to say out of fear for the political correctness police: Islam is a religion of anger that allows a husband to beat his wife and would condemn him to death as an apostate. Jory agrees, at least in part, agreeing with the French for banning the veil.

The conversation, fueled by drink, becomes increasingly heated, especially after Amir shocks all by admitting to a certain pride after 9/11, “that we were finally winning.”

He confesses, also, to occasionally feeling an affinity with Iranian politicians who call for wiping Israel off he map. “And I’m saying it’s wrong. And it comes from somewhere. And that somewhere is Islam.”

Though fueled by liquor, the is largely civil. But that changes once Amir discovers that he won’t be made a partner, that because of the Fareed incident his Jewish bosses to no longer trust him. Jory was chosen instead.

Worse still, it turns out that Isaac and Emily had a one-night stand while in Europe at an art show. Amir’s rage takes the evening to a heightened and provocative level, with actions at once understandable, unacceptable and ultimately sad.

Dhillon is absolutely superb as Kapoor, a man whose emotional and intellectuals selves are at odds. He is likely a sympathetic figure for Jewish audience members, who understand what it is to be an outsider, to change one’s name to fit in and succeed. In some ways, they also may empathize with his inability to completely overcome his upbringing.

The other actors are equally proficient, especially Pittman, the one holdover from the off-Broadway production. Like Kapoor, she is brown in a white world and her nuanced performance makes it clear she understands the special sacrifices that need be made to make it.

Director Kimberly Senior, who directed the original New York adaptation, has efficiently and gracefully moved it to the larger stage.

The play is not perfect. There are contrivances that seem odd. Why, for example, did Kapoor speak to a reporter? How did he not notice the changes in attitude towards him at work, that his mentor would no longer take his calls? Also, while the brief Emily-Isaac affair plays a role in the play’s shocking denouement, it detracts from the main theme.

Still Akhtar’s play is so complex, multi-layered and totally engrossing, it’s easy to skip over (or not even notice) these ploys.