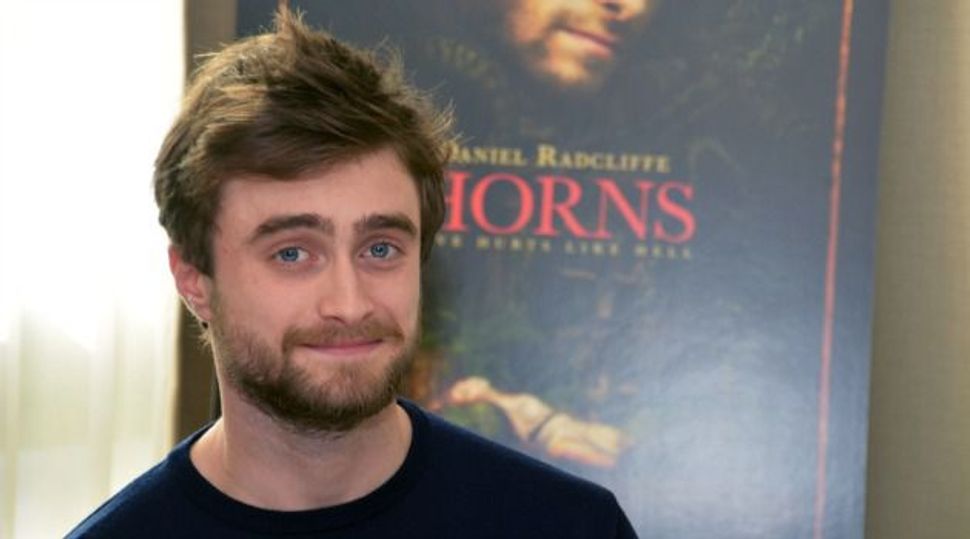 Actor Daniel Jacob Radcliffe, now 25, has a net worth of $110 million, thanks mostly to the Harry Potter franchise. The eight movies all made it into the top 50 grossing films of all time. At 18, Radcliffe was ready to shed the Harry Potter image. He starred onstage in “Equus,” a role that requires full-frontal nudity — and lots of it. These days Radcliffe continues to take off his clothes. In 2013 we saw him in a gay sex scene as the Beat Generation poet Allen Ginsberg in “Kill Your Darlings.” Then his clothes came off again in that summer’s romantic comedy “What If.”

Now you can see him in the buff starting on Halloween, in the horror-fantasy-drama, “Horns.” The film is based on the best-selling novel by Joe Hill, son of Stephen King. Radcliffe plays Ig Perrish, a man who inexplicably sprouts horns right after his girlfriend, Merrin, is raped and murdered and he becomes the prime suspect.

Naked or not, though, Radcliffe is a damn good actor. Last year he played a morphine-addicted doctor on the BBC TV show “A Young Doctor’s Notebook,” portraying the younger version of Jon Hamm’s character. He received critical acclaim for playing a crippled man on Broadway’s July revival of “The Cripple of Inishmaan.” Known to work 90-hour weeks, the actor has honed an enormous set of talents. He learned to dance and sing for the musical “How To Succeed in Business Without Really Trying”; and in late October he surprised everyone on “The Tonight Show” by rapping a flawless version of the complex, lyric-heavy Blackalicious song, “Alphabet Aerobics.”

Currently, the prolific star is learning to speak Japanese for the movie “Tokyo Vice.” He’s also set to play the son of Michael Caine’s character in the sequel to “Now You See Me,” slated for 2016. And he just wrapped playing Igor in “Frankenstein,” due out October 2015.

The Forward’s Dorri Olds caught up with Radcliffe to talk about his timed-for-Halloween movie, “Horns.”

Dorri Olds: Did you compare Joe Hill’s book with those of his father, Stephen King?

Daniel Radcliffe: No, I wasn’t looking at Joe’s work through the frame of his father’s work. I just viewed it as an incredibly original, daring, witty, emotional piece of writing. I was pleased by how that transferred into the script. Obviously things change in an adaptation, but the one thing that people will get upset about is if the original tone and feel of the book is absent. What makes Joe’s book unique is the joyous rampaging through different styles. I think we stayed very faithful to it, and hopefully that is what the fans will respond to in the film.

Can you talk about the religious aspects of the book?

I don’t think we were thinking about the religion in this film, but you could watch this film as a very religious person and still enjoy it. There’s a lot of Old Testament style of justice, and the whole story could be in a way like Ig is a sort of Job figure tested beyond the realms of what is right. But I think it’s more that we are using religious symbolism to tell a story about humans, not the other way around.

What do you think about the fact that this film has so many genres all in one?

Mixing genres is always going to be more interesting. It’s much truer to life. If you were to look at your life as a film, you’d be very hard-pressed to pin it all down to one genre. I love black humor. Scripts like this without a sense of humor I wouldn’t be interested in doing, because I think that any situation, especially the darkest, often results in using humor as a coping mechanism. It’s a lot more interesting, complicated and real that way.

Movies used to do all sorts of things. One of my favorite films is “A Matter of Life and Death,” which has amazing flights of fancy, like when they all go up to heaven and have this heavenly court case. It’s also very funny and has dramatic tension throughout. That’s what excited me about this script. I think we live in a world where people are obsessed with the categorization of things, and I like that this is very hard to pin down. If you can describe a movie and do it justice in one sentence, it’s probably not a very good movie. This one takes many sentences to define.

What would you say is the most poignant moment in “Horns”? Is it when Ig is with his parents?

Oh, yes, that was horrible. But what always caught me up short every time, whether reading it or shooting it, was the final scene in the tree house when I read the letter and find out what was really going on. That, to me, is what makes the film stay with you. That love story is so key to the film, because if you have created this universally recognizable perfect, love relationship, would you then destroy it? There is something so blissful and golden about it, and something I think everyone has had some version of, so to see that destroyed and then find the end of that storyline is what made the film really special to me.

How would you describe the romance of Ig and Merrin?

It’s undeniable that when someone like that walks into your life and becomes intertwined in it — that’s what makes the relationship so special. They meet each other in the formative years and become for each other what the other one lacks. This is such a loving, committed relationship. My mom and dad have been married 30-something years. The institution of marriage is not something that I’ve had any personal bad feelings with. I see it as improving the other.

When you’re working at a really emotional scene and the director says “Cut,” do you go right back to being yourself?

No, not really, particularly if you’re not done yet. It’s not helpful to immediately snap back. It’s hard to go back and forth. It’s intense when you do emotional scenes with another actor. It solidifies your relationship because you’re in it for two days and it’s very emotional, so you need to be there for each other. You also need to be in your own space. No, it’s definitely not something you flip in and out of very easily.

Does fame ever get in the way of friendships? Does it feel as though people are using you?

No, because most of the people I’ve met in my life I’ve met on film sets. They’re used to actors being around, and they actually don’t even like many of them [laughs]. So, if we’ve become friends it’s for real reasons. I think when you’re young and you become famous, you know, people who are going to hang around you because you’re famous are normally not the subtlest types of people anyway, so they’re quite easy to spot [smiles].