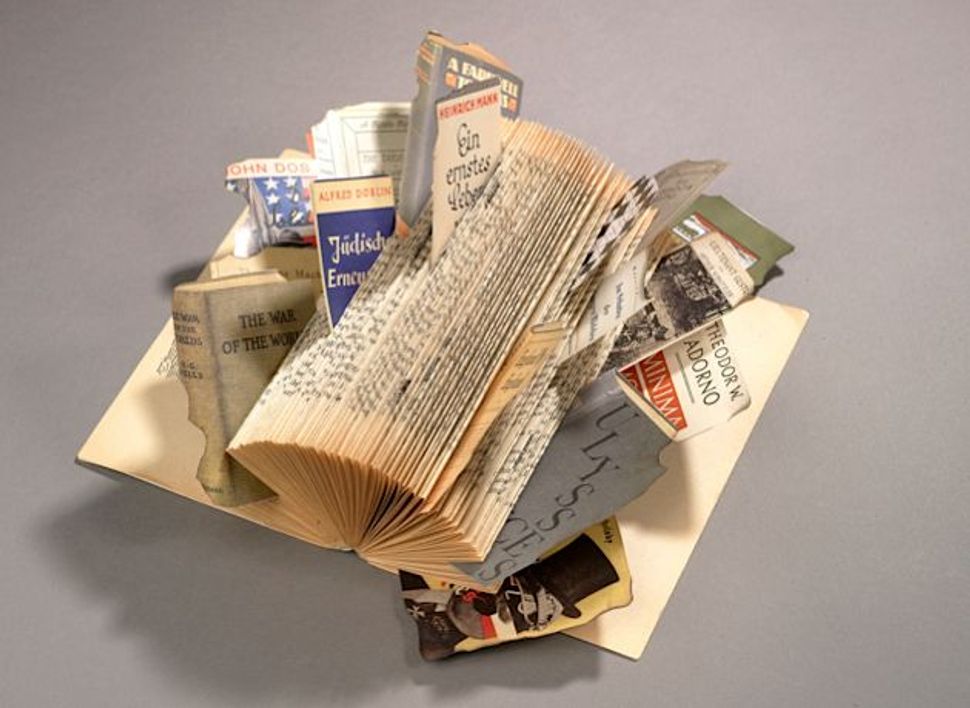 The concept behind genizot is simple. These spaces, usually housed in synagogues, would store disused documents that contained the written name of God — and thus couldn’t be discarded.

But genizot also symbolize remembering. And that’s what Canadian artist Bernice Eisenstein so brilliantly explores in “Genizot: Repositories of Memory,” her new exhibition at the Royal Ontario Museum in Toronto.

At first glance, “Genizot” seems like a loose assemblage of work. Eisenstein pairs her black-and-white portraits of figures like Antoine de St.-Exupery and Marcel Proust with elliptical text treatments; a glass display case houses casually arranged found objects. But as with all of Eisenstein’s work, there’s a compelling internal logic that unites the project into a powerful statement about memory, its weight, and its fluidity.

Memory is a favorite subject of Eisenstein, who created last year’s acclaimed “Correspondences” with Anne Michaels, and is the author of the award-winning graphic novel “I Was a Child of Holocaust Survivors.”

“Genizot” was created for Holocaust Education Week in October, but the project will run through February 8, 2015 (Eisenstein is also one of the artists in “Graphic Details: Confessional Comics by Jewish Women,” which I co-curated and The Forward sponsored.)

“I’m not didactic,” Eisenstein told the Forward from Toronto. “I want whoever sees “Genizot” to engage in it however their own memory works.”

Michael Kaminer: What’s the common thread between the people whose portraits you painted for “Genizot?” The roll call includes Alzheimer, St-Exupery, Proust, Felix Salter, the creator of Bambi, your mother…

Bernice Eisenstein: Well, first, I love these guys. I get the privilege of being in their company. I find people that I love, and look to see what’s there. And there’s always more to be found.

All those paintings are also aspects of memory; a portrait’s a memory of someone. My mother’s portrait sits next to Alzheimer’s portrait, then beside his there’s text of a conversation Alzheimer had with his first patient, someone called Auguste D. It’s very poignant, like a piece of poetry. Under that I added a straight definition of poetry, then a quote from Plato about “the sea of forgetfulness.” My own mind is like puzzle pieces — I’m putting all of these things together so that more comes out of it.

Collaged and folded edition of Felix Salten’s Bambi: A Life in the Woods by Bernice Eisenstein. Courtesy ROM.

Would you call “Genizot” an outgrowth of “Correspondences,” which dealt with memory in its own way?

I work with memory, so it’s a continual line. With “”Genizot,” I was thinking about memory and places where memory exists. It became wonderful work for me, finding something unexpected, which would open up more doors. That’s what I’m concerned with — more doors open, and I fill them in as much as I can. It’s not about providing answers.

Well, what is meaningful? I can’t throw things away. They’re touchstones. People keep memories everywhere — in a pocket, in a book. I have serious regard for those things. You read a bunch of books, your head’s a library. You’re your own geniza. For me, my studio’s a geniza.

The installation opened for Holocaust Education Week, and it’s in one of Ontario’s most important cultural institutions. How do you think responses to “Genizot” might differ between Jewish and non-Jewish visitors?

Do I have a Jewish sensibility? You know I do. What does it mean? Let somebody else answer that.

My sensibility is formed by my background. But there are a lot of touchstones, a lot of food that I’ve eaten in order to make this art. That’s not what it’s about. The people who installed the show weren’t Jewish, but they got all of it. People come to a show and say “here’s what an artist has opened up to us.” The rest of it, they’ll bring themselves.

How did you structure a show that’s about memory generally, but the Holocaust specifically?

Memory teaches. We are responsible for it. I put a painting up of [Austrian writer] Stefan Zweig with text behind it, which is names of artists the Nazis deemed “degenerate.” [“Bambi” author Felix] Salten is on the walls. Behind him are all the names from book burnings in Germany. Dos Passos, Hemingway, all the best you can imagine was burnt up. That was an attempt to erase history, erase collective memory. None of this should be forgotten.

Genizot includes a display case of found objects, some of which you’ve altered — keys, starfish, a jar of ink, a Hebrew letter “aleph.” What are the connections?

If you look in the vitrine, you get the sense that memory’s all passing. We’re passing. We’re the ephemera. For a while, we want to be very present. But we all feel the fragility of the passing of time.

The aleph in the case is cut and raised, so you’re getting the shadow of an aleph. Aleph is the first breath. It’s a silent letter. It has its own sacred quality. It’s before speech, and meditative. Physically, what I love about it is that it represents man — feet on earth, meaning grounded, and hands to heaven.

There’s an exhibition opening at [Toronto’s] Art Gallery of Ontario in mid-January called “Memory Unearthed.” It’s a perfect title. Henrik Ross, a Jewish photographer in Poland during the war, had buried thousands of negatives that contained photos of the Lodz ghetto. He returned and dug them up. The AGO asked a few people to write essays for the exhibition catalog. I wrote about memory.