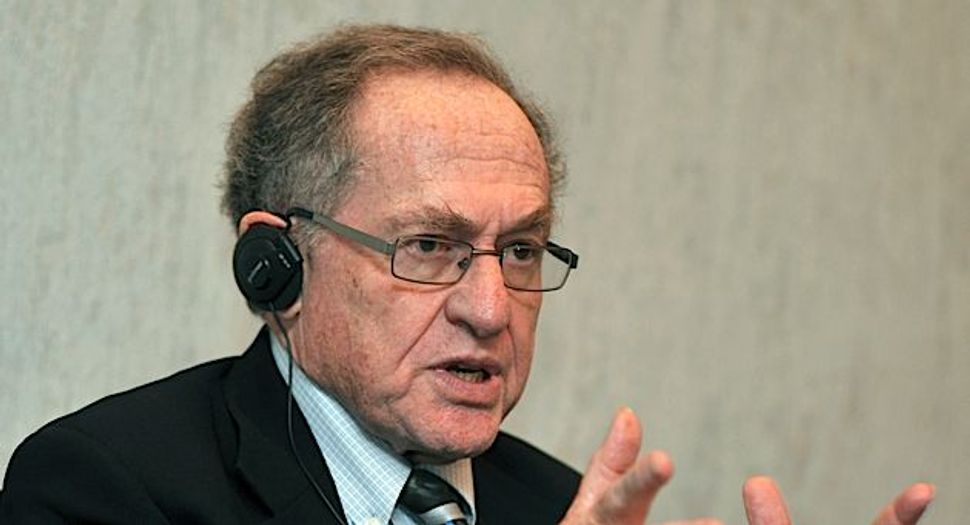 Alan Dershowitz spent 50 years on the Harvard University law faculty, including the last 20 as the Felix Frankfurter professor of law. In all that time, he didn’t just talk the talk. He walked the walk, too, representing a number of frequently unpopular clients — Mike Tyson, O.J. Simpson, Claus von Bülow — in frequently landmark civil rights and civil liberties cases.

He has also been a voluble defender of the State of Israel and Jews worldwide, most recently with his new book, “Terror Tunnels: The Case for Israel’s Just War Against Hamas,” his 31st tome to accompany dozens upon dozens of articles and opinion pieces for newspapers and magazines the world over.

Dershowitz spoke to the Forward about Operation Protective Edge, the terror attacks and murders at a Jerusalem synagogue, and a recent client who has yet to pay his bill.

Curt Schleier: What is the case for Israel’s war on Hamas?

Alan Dershowitz: I was in Israel in mid-June and it was arranged for me to see one of the tunnels. It was recently discovered very close to a kibbutz kindergarden with 57 Israeli children. When I saw the tunnel and how sophisticated it was, with electricity and rails, it became crystal clear to me that we would have to send the troops in. A few days later, I had dinner with Prime Minister Netanyahu and I could see how reluctant he was to send in ground troops. But when Hamas used the tunnels and killed israelis he had no choice.

In the book I raised the issue: President Obama, [British Labor Leader] Ed Miliband [both of whom criticized Israel’s response], what would you have done with the tunnels? I make the case that under the law and standards of morality, Israel did the right thing. And I have some pretty strong people on my side. Gen. [Martin E.] Dempsey [chairman of the joint chiefs of staff] said Obama was wrong. Israel did everything it could to protect civilians. And Gen. Dempsey sent American troops to Israel to learn how to fight terrorists in civilian areas. President Obama ought to reconsider his views, particularly since we’re fighting ISIS using those tactics. I just wrote an article in the London Times challenging Miliband on what he would have done under the same circumstances. It’s easy to criticize. Much harder to come up with policy.

So why doesn’t the rest of the world can’t see that?

There’s an old story of [Abbott] Lowell, when he was president of Harvard [1909-1933] he wrote a memo insisting the school admit fewer Jews because Jews cheat. [Justice] Learned Hand wrote back that Christians cheat too, to which Lowell replied, you’re changing the subject. I’m talking about Jews. If you reply to the criticism about what Israel is doing by saying look at what the U.S. is doing, or look at what Britain is doing, the comeback is you’re changing the subject. We’re only talking about Israel. What Israel does is perfectly rationale and reasonable in any other country, but a double standard is applied to Israel. Israelis have a right to apply a higher standard to their country, But Jimmy Carter, Bishop Tutu and J Street don’t have the right. And they don’t have the right to suggest a moral equivalency with Hamas. There is no moral equivalence.

What impact will the synagogue murders have, if any?

The world is outraged, for the moment. But even The New York Times describes it as a cycle of violence, and Spain responded to the attack by having one of its houses [of government] call for recognition of Palestine. But the real story wasn’t the attack, horrible, horrible tragedy that it was. Much more important was the incitement [Mahmoud] Abbas [the head of the Palestinian Authority] made by saying Jews infected the Temple Mount, calling for a response, writing letters of condolence to the family of the [murderers] killed. And the other story is what happened, after, the cheering, the posters, the celebrating. I guarantee you that Abbas will name a park for the two people. They always do that. I’m not talking about Hamas now. I’m talking about the Palestinian Authority.

What would you do?

I think Abbas has to be held accountable. I think the U.S. should tell him that we find it unacceptable for him to make those kinds of statements, he condemned the attack, but coupled that with essentially blaming it on Israel’s actions on the Temple Mount. The U.S. has to stop having a balanced approach. [By contrast], Netanyahu gave a speech urging Israelis not to respond. Evenhandedness in the face of moral asymmetry is a lie.

The other thing that has to happen is to make sure the U.S. makes a good deal with Iran, because a bad deal endangers the whole world and threatens to create a major gulf between us and Israel. My nightmare is that it’s a good deal but not a great deal. Obama says it’s the signature achievement of his administration, but Israel decides it’s not enough and has to take military action. Then you have the worst relationship between us and the only beneficiaries are America’s enemies and the enemies of Israel.

You’re pretty hawkish. But it’s easy to be hawkish if you have no skin in the game, living here in the U.S.

I’m not hawkish. If there were a way to close the tunnels without troops I would be in favor of that. But the [Gaza] end of tunnels are in mosques and private homes. And we don’t know their routes. So I’m just making a logical point that there was no way other way than by going into Gaza to close them. If they made a decision not to do so the tunnels would have stayed open. And Bibi did make that decision initially. He waited until Hamas used the tunnels and killed Israelis. I think any democracy would have responded in the same way and it is extraordinarily hypocritical for Ed Miliband to suggest otherwise.

On a lighter note, how are you enjoying retirement?

I still am practicing law.

You just defended Abraham on charges of attempted murder in a mock trial at Temple Emanu-El in New York. And you got him off, too. Did he pay his bill?

No, I’m still chasing him.