‘Bodies’ of the Persecuted 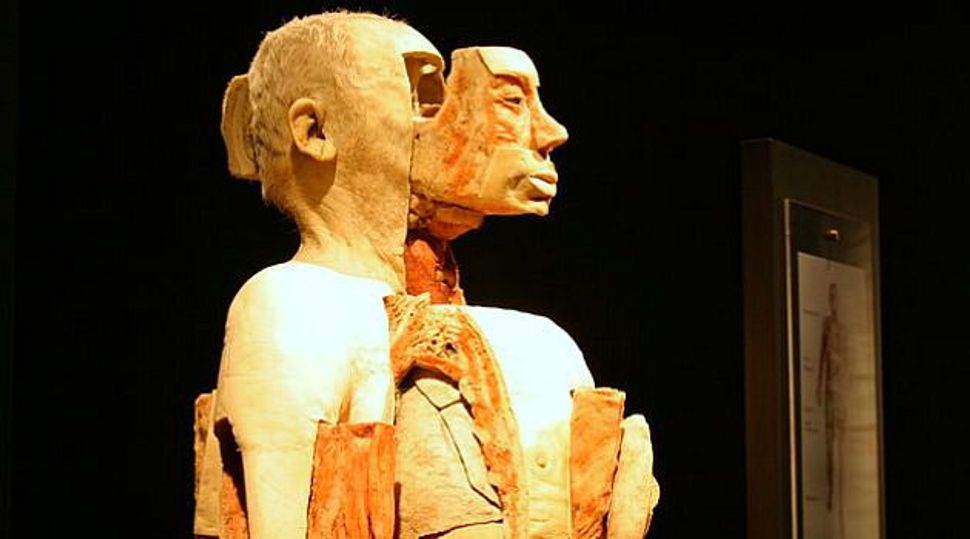 Extensive evidence suggests that both of the popular “Bodies: The Exhibition” and “Body Worlds” exhibits, which tour major cities across the world, have displayed and may continue to display the plastinated remains of Chinese practitioners of the Falun Gong, a spiritual belief rooted in Buddhism. In 1999, the Chinese government arrested and imprisoned Falun Gong believers by the thousands.

Masha Savitz’s debut documentary, “Red Reign,” chronicles the efforts of David Matas, a Jewish-Canadian human rights lawyer who has fought to expose the Chinese government’s systematic imprisonment, slaughter and for-profit organ harvesting of these prisoners. In 2010 Matas was nominated for a Nobel Peace Prize for his investigation of the Falun Gong imprisonment.

With a rabbi for a father and an artist for a mother, Savitz spent her formative years in Parsippany, New Jersey. A Boston University graduate, she taught at religious schools to earn a living before attaining a Masters in Rabbinic Studies from American Jewish University. With her background in journalism as a writer for The Epoch Times, Savitz grew interested in filmmaking, and became an important advocate for the community of spiritual practitioners who have suffered human rights abuses of the worst kind.

Savitz, 49, currently heads the Early Childhood and Arts programs at a Conservative synagogue, Kehillat Ma’arav in Santa Monica, California. She spoke with the Forward’s Sam Rosenthal about the role Judaism played in rallying her around this cause, why she feels that helping the Falun Gong is so important and what it was like making her first film about such a painful topic.

Sam Rosenthal: Did your Jewish identity have anything to do with your desire to make this film?

Masha Savitz: Very much. My first impulse was the connection to the Holocaust. I think my being brought up Jewish gave me an immediate and visceral response to this — I really felt it in my body. Someone needs to stand up for these people, who can’t really do it for themselves.

How do you feel about the progress being made with efforts to end the Chinese organ harvesting?

Why aren’t people more aware of this? How has it been concealed?

The Chinese Communist Party has used these tactics — bribery or threats — for years. One of the things discussed in the movie is that there are two other people who had films (about the organ harvesting), and the CCP bribed film festivals so that the films would not be shown. This happens all the time — we have no idea about it. We needed to make sure that this film would get out, so we made sure in my distribution contracts that I would have screening rights, to make sure that I wouldn’t be stopped.

Have you personally experienced any censorship efforts?

David Matas was once threatened before speaking at a film engagement. I had my email hacked a year ago, and the password was changed. This was a few months before the film came out, right before the first screening.

Do you feel that Jews have an obligation to examine human rights abuses and persecution worldwide?

Without a doubt. We are actually mandated to, it’s not just a nice thing to do. We can’t allow it in the world. And we’ve learned it the hard way. There are a lot of Jews that get it.

Talk about the touring Bodies exhibitions.

The best I can tell you is that, from my understanding, prisoners of conscience — held for their beliefs — were used for those purposes in the Bodies exhibits. Some of them are even missing organs, so they’ve been used for both [organ harvesting and the exhibitions]. So it’s nothing like we think it is.

What was it like making this film? It is painful, aggravating and tragic enough to watch — what kind of toll did it take on you as a storyteller?

It definitely was a really hard time. I didn’t get funding, so I had to fund it mostly myself. And then emotionally, it was really hard. Going through the footage, there were days when I didn’t know how I was going to make it through hours of footage like that. But I also realized that I had a lucky job of being the one telling the story, when other people were actually living it. So I had to keep that clear in my perspective. I also felt that it was meant for me, because of my Jewish background, and my opportunities in the media, and meeting David; I felt that this was my job to do. And I felt grateful for the opportunity.

What can you say about David Matas and the efforts of those who worked to expose this systematic killing-for-profit?

What goes through your mind when you realize that this kind of atrocity can still take place?

Humanity is a pretty fragile and people think, “Well, China, you can’t do anything about China.” And that’s a mistake. I showed in the film that Israel has made changes [after it closed the “Bodies” exhibit], governments have made changes, and it is happening. We can do this, and we must.

‘Bodies’ of the Persecuted