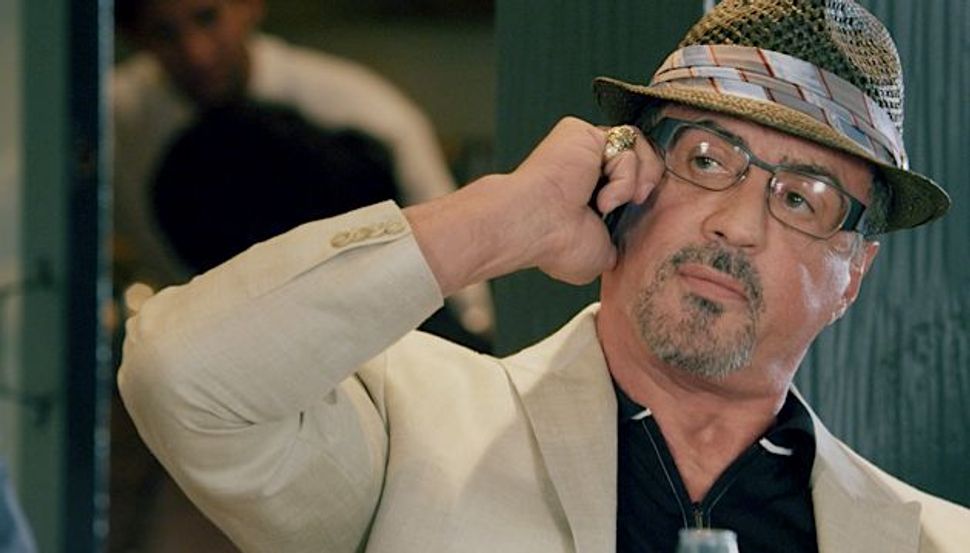 The story begins when Gerald sends reporter Roger (Kevin Connolly) to blow Teddy’s anonymity. During the mission Roger falls for Kate (Lauren Cohan from TV’s “The Walking Dead”). Meanwhile, Danny Trejo plays a hit man and Kelsey Grammer does a cameo as a stone-cold scary guy.

The Forward caught up with Herzfeld to talk about actors, moviemaking and World War II:

Dorri Olds: What inspired you to write “Reach Me”?

The book that is the granddaddy of all motivational literature, “Think and Grow Rich” by Napoleon Hill from 1937. It’s not really about accomplishing wealth, though. It’s about training the mind and the laws of attraction. Napoleon Hill interviewed Henry Ford, Alexander Graham Bell, Thomas Edison, John D. Rockefeller, Theodore Roosevelt, F.W. Woolworth and William Rigley. He interviewed these great entrepreneurs, and asked, “How did you overcome the odds?” He became an advisor to Woodrow Wilson and Franklin Delano Roosevelt.

Do you imagine yourself as the writer of a self-help book?

Not as the writer, no, but I wanted to go into the movie business. There was one other fellow, Reverend Ike, an African American Gospel preacher who had a church up in Harlem. He said, “If you’re successful you can still get into heaven. God doesn’t just love the poor and downtrodden.” His message was more spiritual and less taciturn than Napoleon Hill.

Wait a minute. With a name like Herzfeld, you must be Jewish, no?

Yes! I was just curious so I went up to Harlem one day and sat in on his Sunday positive thinking sermon. When I first walked in I had a cynical edge and had 20 bucks to my name. I was between jobs and broke. I gave that 20 dollars and walked back from Harlem down to the Lower East Side because I was motivated. I was inspired.

What did your family think about you going into the movie business?

Nobody ever asked me that. Very interesting question. My mother was always extremely supportive. My father was a highly decorated veteran of World War II. He was a captain during the war, then asked by the Eisenhower administration to stay in Germany. He stayed for two years and became the military governor of Bavaria to de-Nazify that part of Germany. He was a strict, tough guy. When he found out I was gambling as a teenager he said, “You do what you want but if you get in trouble I’m not going to bail you out. Be careful. You’re going to be responsible for your actions.” Of course, as a kid you don’t listen to that kind of thing but as you get older you realize it makes a lot of sense.

What was your father’s name?

Henry David Herzfeld. He was instrumental in the liberation of Dachau. He’s on the third floor of the Washington, D.C. Holocaust museum in a photo holding a clipboard and checking survivors and he’s been written about. There’s a book called “Entering Germany.” I’ve been to Dachau several times, and to Auschwitz. I’m a World War II buff. Since your father was positioned in Dachau, too, I’m sure you’ve heard the stories.

My father wouldn’t speak much about it. I think he’d seen too many things. The things he told me I could never forget. As they were approaching the camp, they were two miles away and they didn’t know they were going to a concentration camp. They thought they were liberating a camp of POWs. He said they could smell burning flesh in the air. He also said, as they approached there were all these railway cars that were opened up and they held stacks of wood all the way to the top. But, as they got closer, they realized those weren’t stacks of wood, they were bodies. He told me about lampshades made of human skin.

When you go through Dachau you see these photographs of doctors operating on concentration camp victims without anesthesia but the thing that freaked me out more than anything was looking at the oxygen container that they’d put a Jew into and they’d raise the level to see how long it takes, as you suck oxygen out, for the head to burst. I’ll never forget that.

I directed a television movie, “A Father’s Revenge” with Brian Denehy and Ron Silver. While we were filming I lived in Berlin for a year. We were working close to Dachau. You’d run into people who’d been around during the war but I never ran into a person who said they knew what was going on. “We didn’t know what happened at Dachau. We had no idea.”

What did they think the smell was?

Exactly. There you go. What did they think the fumes of burning corpses were?

My dad attended the Nuremberg trials. He was asked to sit in the audience to help with information. He took photographs through the buttonhole of his shirt where he’d hidden a tiny camera. I don’t know if that’s totally kosher but that’s what he did. When I saw the movie, “Judgment of Nuremberg,” he told me some of the things that he had seen. That’s an incredible movie by the way.

Are the photos in the Holocaust Museum also?

No, but there is a museum outside of Boise, Idaho, near where my brother lives, that has a lot of his artifacts. Lugers [German pistols] and flags. I’ve never discussed this but the day before my father passed away he started to tell my stepmother, his second wife, about participating in the Battle of Hürtgen Forest. He’d never mentioned it but he knew he was about to pass on so he talked about it. I looked it up and this was a battle in Germany where 33,000 Americans and 28,000 Germans were killed. American soldiers had to advance through sinkholes up to their waist in muddy swamps and were cut down by snipers who hid in the trees with machine guns.

When I grew up, I never knew about that. At 12, I liked to go to a local range and shoot guns. My father would drop me off at a rifle range and say, “I’ll wait in the car.” Now I understand. He’d had enough of weapons and wanted nothing more to do with them.