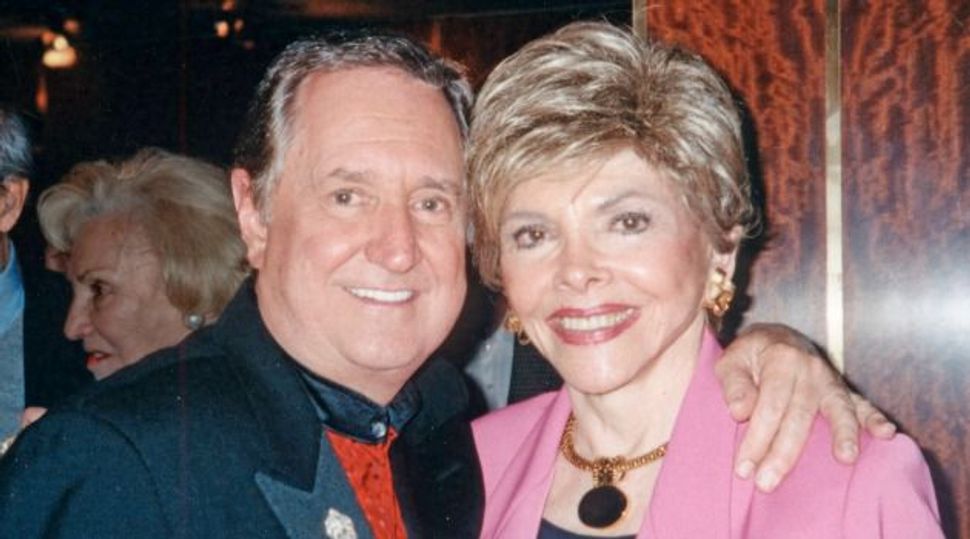 Neil Sedaka and Claire Barry at a 2005 Folksbiene Gala. Image by Karen Leon

The first time I met Claire Barry, the then-surviving sister of the legendary Barry Sister who died on November 22 at 94, was in July 1983 at the Catskills hotel Brickman’s a.k.a. “The Citadel of Comedians.”

My husband Joe and I were leaving after a week but resident comic Jan Murray insisted we stay one more day to hear Claire Barry who had just begun to launch her solo career following the death of her beloved sister and singing partner Merna.

She literally “flew” on stage — vibrant, in a stunning pearl grey chiffon gown as the audience gasped and you could hear whispers of “how old is she!?” Charming the audience with a medley that included “Mame Loshn,””Abi Gezint.” and “Bei Mir Bistu Shein” (and other Yiddish favorites) she revealed: “I’m from the Bronx, went to Monroe High School…and if you want to know how old I am — I’m in my middle earlies.”

Barry attributed her youthfulness to “sex, exercise and diet,” then invited everyone to an afternoon session where she promised to answer all questions — except her age — and to share her recent pains and victories. Always meticulously dressed and coiffed, she reminisced about her sister Merna’s and her long career, starting in their pre-teens as the Bagelman Sisters.

Over the decades we continued to meet, at The Concord or other hotels, where we’d shmooze over a glezele tei (glass of tea) following her performance.

In 2004 at the Folksbiene Yiddish Theatre Gala at Carnegie Hall, the ageless Claire Barry in a hot pink pants suit joined with **Neil Sedaka” at the piano and thrilled the audience with a medley of Yiddish favorites. “As for my age…” Barry told the audience, “It’s like a telephone number — unlisted!”

We caught up at a June 2, 2005 reception for Eli Wallach’s launch of his autobiography at Elaine’s attended by Alec Baldwin, Ben Gazzara and attorney Barry Slotnick at which she held court in a black outfit with hot pink scarf.

Her most recent public appearance at which we had a chance to chat was the June 27, 2005 Yiddish Artists & Friends Actors Club and Yiddish Theatrical Alliance dinner dance held at Park Avenue Synagogue. The evening coincided with the Alliance’s president Corey Breier’s’ 50th birthday and his parents’ 59th wedding anniversary. Breier — who had been a fellow student with me at Queens College’s Yiddish Studies Program in the mid 1970’s — was ever at Barry’s elbow maneuvering the ageless gradually vision-challenged star as my mother once said, “vi a kavalier” — like a gentleman.