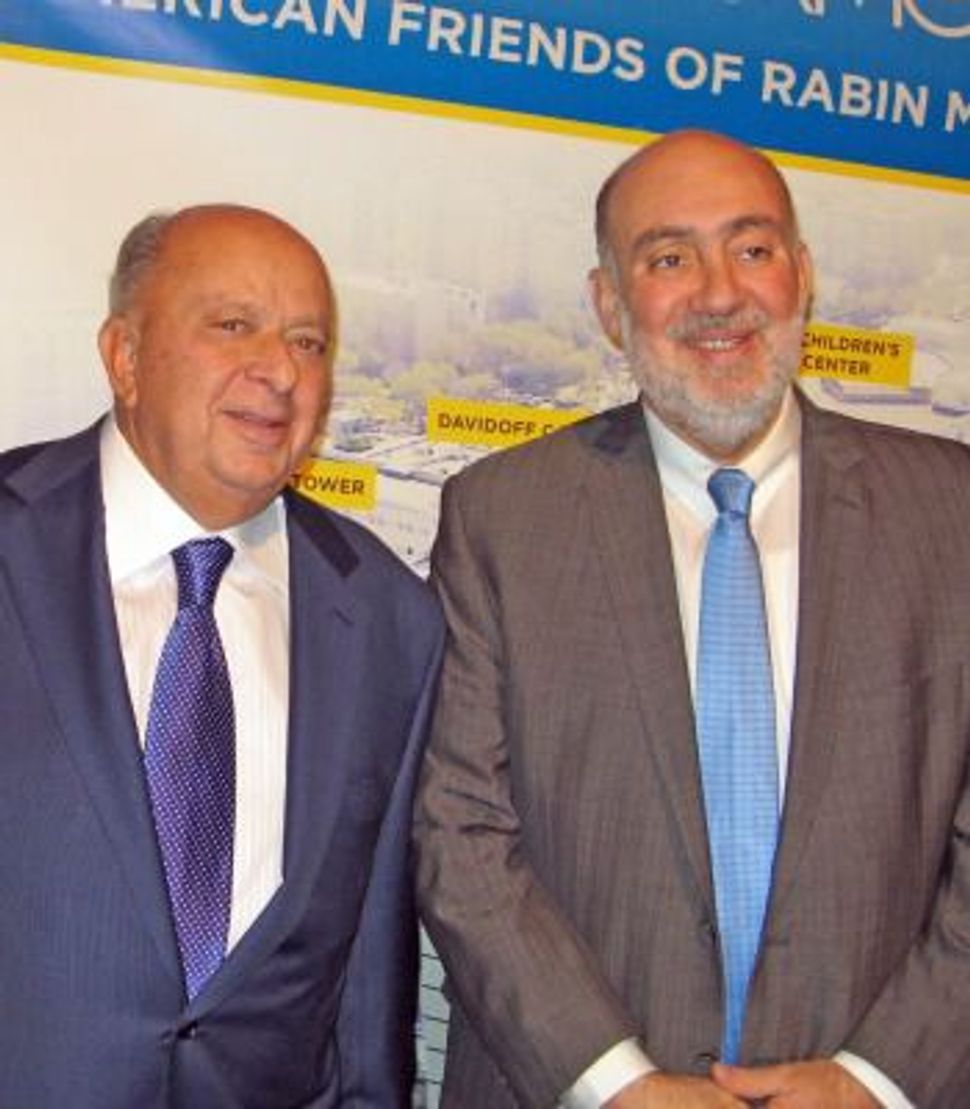 The American Friends of Rabin Medical Center’s 2014 Gala at Cipriani 42nd Street that honored real estate “legend” Crown Acquisitions Stanley Chera was a simkha of a special kind. Chera, who was presented with the Yitzhak Rabin Excellence in Leadership Award, was taken aback when it was announced that Rabin Medical Center will name The Stanley and Cookie Chera Family Pulmonary Institute in appreciation of their generosity.

AFMRC Executive Director Rabbi Joshua Plaut dubbed Chera “a shining light” and further stunned the honoree and his family with a surprise video tribute that appeared to include the crème de la crème of New York’s real estate movers and shakers including Jared Kushner, Bill Rudin and Sen. Chuck Schumer. In the video Gala chair Lloyd Goldman, Founder of BLDG Management, said: “Rabin Medical Center is about taking care of people. Stanley understands that Jewish values are about taking care of people in the community and Rabin Medical Center is the epitome of how Israel should be known — taking care of people and the community.”

In what was his 5th appearance as Rabin gala emcee, Charlie Rose shuttled between debaters Ron Prosor, Israel’s 16th Permanent Representative to the United Nations and Mortimer Zuckerman, Chairman of Boston Properties, Inc. and editor-in-chief of U.S. News and World Report. Rose led off by touting the wonderful relationship between the United States and Israel — “based on shared vision of the two democracies that believe in medicine in the service of humanity [that] superseded the boundaries of geography and nationality.”

Amb. Prosor noted soberly: “…Education, leadership…are crucial to achieving peace.” Zuckerman spoke of a “new alliance now among Arab countries…[offering] an environment or framework for enough countries in the Middle East to join with Israel to deal with the problem of the radical forces in that region.” Prosor responded: “We know what the neighborhood is like…we know that we need peace and we will try to do that…and for that we need to be strong. Because a very strong Israel is going to achieve a lasting peace.”

The gala celebrated the inauguration of the Rabin Medical Center’s new Emergency and Trauma Center — a 54,000 sq. ft. facility — the largest in the Middle East. Named for PM Yitzhak Rabin, the hospital in Petach Tikvah treats one million patients annually and during the war with Hamas in Gaza, treated wounded soldiers and traumatized civilians.

Adding excitement to the evening, the 550 guests were treated to a preview of the due-in-March 2015 Broadway musical production of “Doctor Zhivago”… a special performance by composer-lyricist Neil Berg’s All Star Band starring Rita Harvey whose credentials include the role of Hodl in the last revival of “Fiddler on the Roof” and Hugh Panaro who played the role of the Phantom in Broadway’s “Phantom of the Opera” for over a decade. Then there was an After Party starring Tony- nominated stage actor Marc Kudischand vocalist Deena Miller and the music went on late into the night. And yes…the food was great.