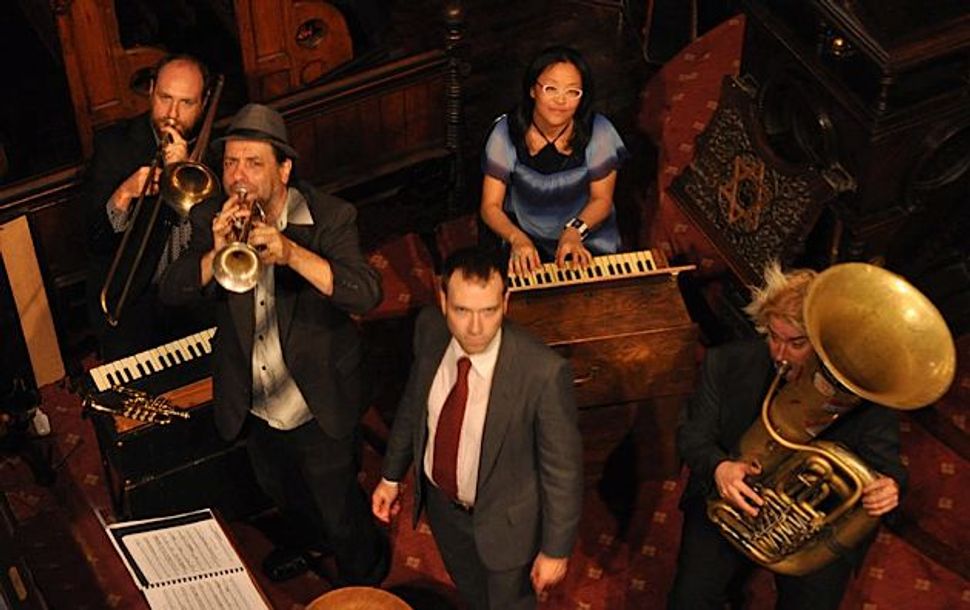 Jon Madof’s 12-piece super-group Zion80, whose debut release last year was hailed enthusiastically in the Forward, The New York Times and elsewhere, has now released its second album, “Adramelech.” It’s a departure from the original concept of bringing together Shlomo Carlebach and Fela Kuti; on this album, the band plays a set of compositions from John Zorn’s “Masada” songbook.

Indeed, the music on this record is in line with the rest of Zorn’s work, but set to irresistible Afrobeat arrangements. More complex, dark, and phantasmagoric than their first album, it is fraught with melodies reminiscent of the Middle East and North Africa. But what really makes this album so memorable is the interplay of the horn section as they roll through the melodies.

Jeremiah Lockwood’s engagement with Jewish cantorial music reaches its apex on “Songs of Zebulon,” as Lockwood pays tribute to cantor Zevulun Kwartin. Lockwood, a superb punk-blues vocalist, summons the melodies of the cantorial past against the backdrop of ethereal, sparse arrangements by trumpet player Frank London, as well as Shoko Nagai, Ron Caswell and Brian Drye. The heart-breaking, personal core explored on this album could send shivers down your spine. It isn’t the sort of music you’d listen to while driving with the windows open, but it is a significant accomplishment for a group of artists engaging with the legacy of cantorial music, and of prayer itself.

Yoshie Fruchter engages with hazzanut as well, as he covers and reinvents compositions by esteemed cantors of the past such as Yossele Rosenblatt, Leib Glantz, Leon Leibgold, and Alfred Fruchter, the artist’s own grandfather. Rock, jazz, klezmer, and even metal come together as Fruchter grapples with heavy-hitting liturgical texts. Already well-known as a virtuoso bassist and guitarist, Fruchter sings on most of the tracks on this album and his vocals truly rival his instrumental abilities.

Yiddish Art Trio may just be one of the most sophisticated young Klezmer collectives around. The band can surely play first-rate klezmer party music, but for this project they opt for complex original compositions and poetry. Indeed, as the band’s name implies, the musicians are seeking here to transform the folk, rootsy music into art. A celebration of the release of their self-titled debut album will be held on December 21 at New York’s Eldridge Street Synagogue.

Benjy Fox-Rosen, bassist, vocalist and one third of Yiddish Art Trio, has released a memorable album of his own this year as well. “Two Worlds” is a tribute to poetry of Mordechai Gebirtig, an influential Yiddish poet and songwriter who perished in Krakow Ghetto. One would be hard-pressed to call Fox-Rosen’s songs klezmer, or folk, or anything easy to name or pin down. The singer’s voice hovers in the higher registers, and there’s a sense of frailness and vulnerability. Indeed that seems to be the right sort of a sound to coax back to life the words of the nearly-forgotten poet.