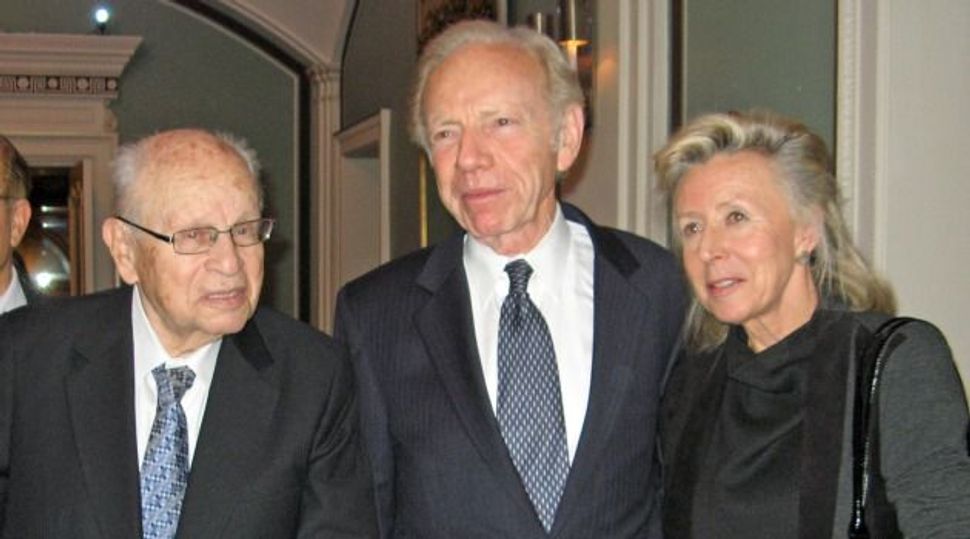 T’was the first night of Hanukkah as 250 guests gathered at The Pierre to celebrate the candle-lighting and relish the welcome by Daniel Pincus the new, young president of American Friends of Beit Hatfutsot/The Museum of The Jewish People.

Pincus, whose family roots include Germany, Chile, Latvia, Lithuania, U.S. and Israel” said that though the museum’s past imperative had been “ to tell the story of the Jewish Diaspora—from the Destruction of the Temple in 70 A.D. to the Creation of Israel in 1948 — there is a new story to be told of the Jewish People living throughout the world today.”

Among the guests at the 36th Anniversary Gala were honorary chair Sen.Joseph Lieberman, his wife Hadassah and Beit Hatfutsot Board of Governors co-chair Ambassador Alfred H. Moses who had worked in the administrations of presidents Carter and Clinton and had been involved in saving more than 300,000 Jews from Communists Romania.

Reflecting on the prior night’s pre-Hanukkah “candle-minus-one” candle lighting, ceremony at Brooklyn Borough Hall, Israel’s Consul General Ido Aharoni, when asked what Brooklyn meant to him, replied: “When I think of Brooklyn, I think of a defining event that took place there in 1918 — a fateful meeting between young David Green and a young nurse Paula Moonves — later Mr. & Mrs. David Ben Gurion!. Most Israelis don’t know this chapter in the history of the founding fathers of Israel.”

When in 2005 CBS chairman Leslie Moonves was honored by The American Theatre Wing Dinner, I had asked him “whence his name Moonves?” He replied: “It’s Jewish, from the Ukraine…. My great-aunt Paula who was married to Ben-Gurion used to pour tea with lemon for me.”

Beit Hatfutsot Chair of the Board of Directors Irina Nevzlin Kogan, described working for this Tel Aviv museum as “a labor of love.” Beit Hatfutsot CEO Dan Tadmor informed: “Despite a summer of war, we again broke our attendance with over 200,000 this year. Our exhibitions ran from Alfred Dreyfus to Jewish Mysticism, Jewish fashion designers” and confided: “In the last 48 hours we gained possession of a 400 year old Megilat Esther from Iraq which had been smuggled out by the Mossad” informing “In 2015 our archives will be fully digital and available on line.”

Gala co-chair and museum Board of Governors member Harvey Krueger — whose own philanthropy on behalf of Israeli institutions is legendary — described honorees Nira and Kenneth Abramowitz as “among the stalwarts of Beit Hatfutsot. Our supporters range all over the spectrum of Jews connected not by political views or by religious affiliation, but by a commitment to Klal Israel in its entirety, leaving room for many different approaches.”

A special presentation was made to American Friends of Beit Hatfutsot co-founder Sam E. Bloch whose curriculum vitae under the heading of “Holocaust Survivor” includes: young partisan in the Belarus forest, President of the American Gathering of Jewish Holocaust Survivors and Their Descendants; President of the World Federation of Bergen-Belsen Association, senior executive of the World Zionist Organization and the Jewish Agency for Israel…and more.