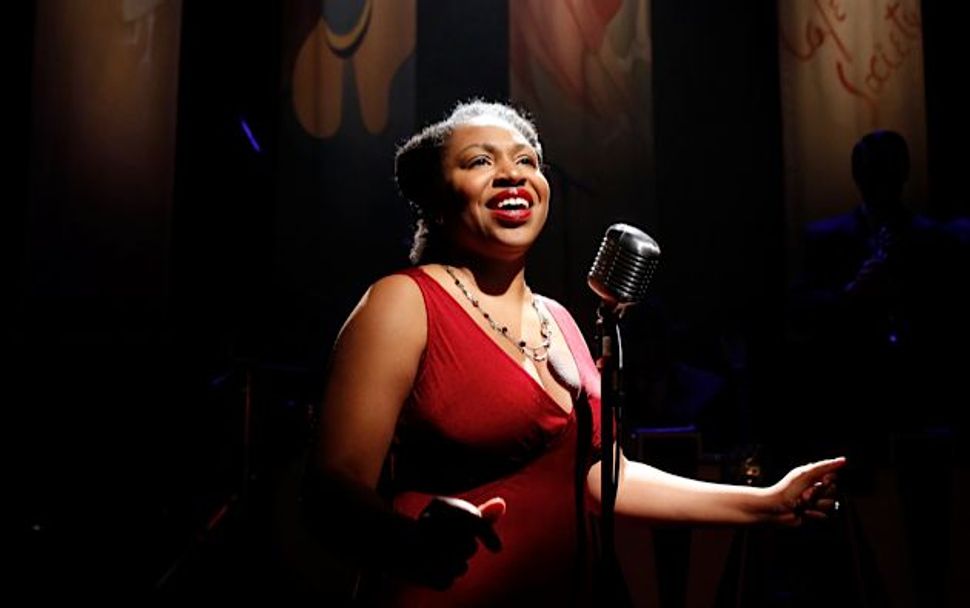 “Cafe Society Swing,” a new musical that opened in New York on December 21, has so many good parts it’s a shame they don’t fit together.

The play tells the story of Barney Josephson, the son of Latvian Jewish immigrants who scrapped together a few thousand bucks and, in 1938, opened a Greenwich Village nightspot he called Cafe Society. A fan of jazz, he wanted to bring downtown the music he’d seen uptown at Harlem’s Cotton Club.

But with a difference: In Harlem, the audiences were almost all white (black customers were seated in the back behind partitions) and the entertainers all black. Even legendary musicians such as Duke Ellington had to come in through the back door.

The club and a sister nightspot uptown were great successes until after the war, when the House Un-American Activities Committee began its red scare tactics. One of Josephson’s brothers, Leon, refused to testify at a HUAC hearing and was sentenced to a year in jail for contempt of Congress. Conservative columnists including Dorothy Kilgallen, Westbrook Pegler and of course, Walter Winchell, used that as an excuse to attack Barney, who was guilty both by association and integration. Within weeks of the attacks his business dropped by almost half and within a year he was forced to sell.

Originally commissioned by the London Jazz Center and created by music director Alex Webb, “Cafe Society Swing’s” strength is its music. It features a first-rate, eight-piece band, which is a sizable ensemble for an off-Broadway production.

It has three remarkable singers in Cyrille Aimée, Allan Harris (who doubles as the band’s guitarist) and Charenee Wade. They perform almost two dozen songs over the course of the two-hour show, from Lena Horne standards “Stormy Weather” and “Where or When” to Billie Holiday’s “Strange Fruit.” To their credit, they don’t attempt to mimic the singers they portray, but manage to bring their own signature soulfulness to the numbers.

Special kudos, too, to David Woodhead and Maruti Evans. The original Cafe Society was decorated with murals painted by Village artists, most poking fun at the high society gents and dames who’d eventually become great customers. Woodhead has decorated the set with art deco style banners that seem to reflect what surely was the mood and temperament of the time.

Similarly, Evans’ lighting of the tiny stage makes it appear far more spacious than it really is.

So, then, what’s not to like? It’s that play tells the story, where it should be acted.

The play’s conceit is that fictional characters tell Josephson’s story. Actor Evan Pappas first portrays a journalist who is assigned to do a hatchet job on Josephson, but who soon grows sympathetic to his subject. In the second act, Pappas is a bartender at Cafe Society. It isn’t until the last couple of minutes of the show that Pappas assumes the character of Josephson.

But in all that time, you never get a sense of who Josephson really was. He had four wives (who are not mentioned) and actually opened a second Cafe Society Uptown (which is also not mentioned). Absent Josephson, the play is also missing his passion — for what he did, why he did it and the reactions of those whose careers he helped nurture.

The script, what there is of it, seems only to get us from one song to the other. The reporter need only mention Lady Day and out comes Wade to sing a medley of her songs. In his next monologue, he says that there were rumors Josephson had an affair with that “high yellar” singer Lena Horne. Out steps Aimée to sing Lena Horne. It all seems contrived; a story to support the singing rather than vice versa.

Attempts to lighten the mood prove to be groaners. Barney was so poor, he said “For 10 years my mother served us nothing but leftovers. The original meal was never found.” A worker in his kitchen is “half black and half Japanese. Every December 7 he attacks Pearl Bailey.” The rumors about Barney were “all true. There’s no smoke without salmon.”

And those were the funny jokes.

The band and musicians make for a worthwhile evening for jazz aficionados. But Josephson’s life is worthy of something more than what you’ll find here.