A ‘Third Wheel’ With a Twist 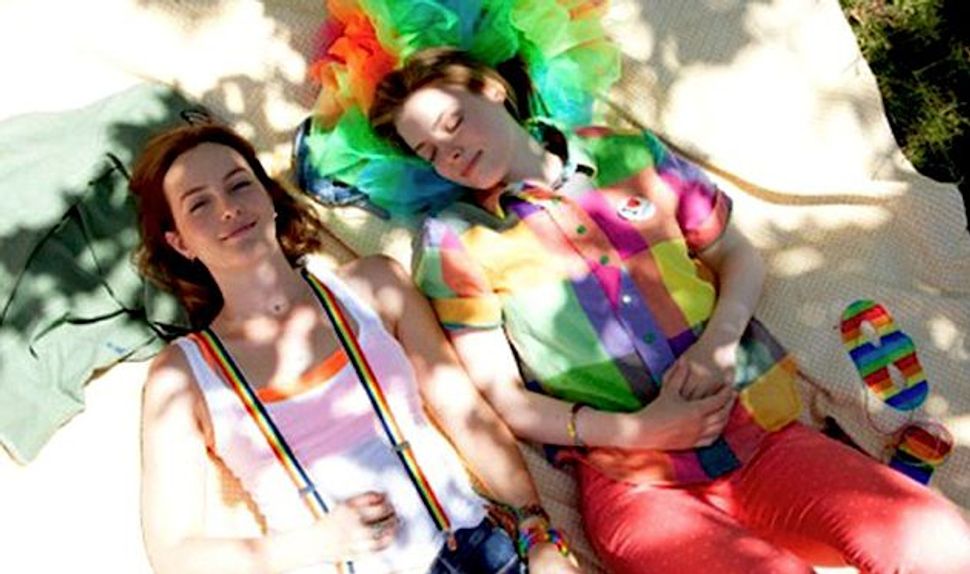 That aphorism is at the center of Susanna Fogel’s debut as a movie-hyphenate. She both co-wrote (with Joni Lefkowitz) and directed “Life Partners,” which opened this month to much critical praise.

The movie is about two women, Paige (Gillian Jacobs) and Sasha (Leighton Meester), co-dependent friends since childhood, and what happens to their relationship when one falls in love. Cinema buffs may see similarities to the 1996 indie “Walking and Talking” (which inspired Fogel and Lefkowitz), but there is a key difference.

Here Sasha is gay. In many ways the relationship between these two women mirrors the one between Fogel and Lefkowitz, almost. In the film, Paige meets Tim (Adam Brody), a dermatologist who momentarily disrupts the ladies’ relationship. In real life it was Lefkowitz who found love and Fogel who was on the outside looking in.

She spoke to the Forward about finding success as a writer and being a neurotic Jew.

Curt Schleier: How did the two of you meet?

Susanna Fogel: Joni and I met at a Second City sketch writing class in Los Angeles. We were both aspiring writers and they had just started the sketch-writing program alongside the acting program. We had both recently graduated from college on the East Coast and were fresh off the plane. When I met Joni she was not out yet. We became instant best friends. Both of us were dysfunctional in the dating sphere. I was awkward and not comfortable when it came to men. She seemed the same, and it wasn’t until later that I found out she had a different reason. When she came out, she connected with this wonderful lesbian community, and I became the token straight person in this group.

I was writing on my own, and I was very driven to do that. Joni was still trying to figure out what she wanted to do and had a lot of internships. But she was a very funny person, so we decided to try to write a script. We’d seen a lot of bad movies and said we could do better than that. If that movie is getting made, maybe there’s hope for us.

When I asked my editor if I could do this story, I’d never heard of you, and I thought it would be nice to give a young Jewish, first-time director some publicity. But you have a pretty good resume. Among other accomplishments you and Joni co-created and executive produced the ABC Family series “Chasing Life,” which was just renewed. So you’re already pretty successful.

I think my answer to that varies depending upon the day. As a teenager I wrote and directed short films shown at Toronto and Berlin [film festival]. I got my first writing jobs soon after I got out of school. So on paper, it seems like I got success early. But you never feel successful enough. The road was getting paved here with moments that were supposed to be game changers here but didn’t turn out the way they should have. We’re lucky to have the success we’ve had, but we feel we’re just beginning to see the fruits of our labor.

In real life, it was Joni who found love and you who were left out. In the film it’s the reverse. How come?

We wanted to explore the ways Joni [Sasha in the film] deals with relationships later in life. She didn’t have formal relationships when she was younger so she goes through the bad decisions later. For younger people, having a piece of your identity not realized affects your ability to get into relationships. In this story, we were also interested in dealing with marriage inequality. Paige [the straight woman of the pair] promised not to get married until Sasha could, but that part of the plot had to be excised.

My parents were brought up Jewish. Both were highly driven academics. Culturally, their values aligned heavily with Jewish values. I definitely identify Jewish culturally. I think my personality is culturally Jewish in the sense of being extremely neurotic, somewhat obsessive and driven and intellectually curious.

A ‘Third Wheel’ With a Twist