‘The Goldbergs’ Were Even Crazier in Real Life 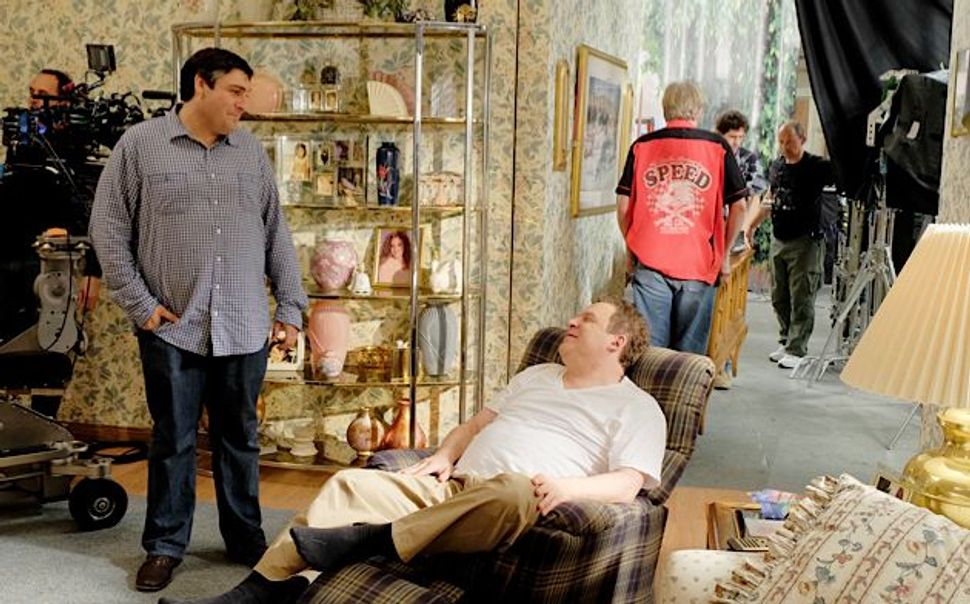 The family portrayed in the ABC sitcom, “The Goldbergs” — which finished its second season January 14 — spends a lot of time yelling and screaming. Mom is a busybody. Dad comes home from work and drops his trousers for comfort.

Though Adam F. Goldberg, creator, writer and executive producer, based the show on his real life and kin, he is quick to assure that the actual Goldbergs were not that bad. They were worse.

“My family is a lot cruder, a lot louder. All they do is yell at each other. My mom [Beverly] is at the point where she recognizes that. Wendi [McLendon-Covey, who plays her] brings a softness she doesn’t have. [My mom says] ‘everyone hugs her at the end of every episode. I never get hugs. She’s not me. She’s too nice. She’s too loud and always gets her way.’”

The show was not always “too nice.” When it first aired in the fall of 2013, the critics (including The Forward’s Ezra Glinter) were, well critical. When I mention that Goldberg suggests I’m the one being too nice.

“In the beginning, we were polarizing,” Goldberg said. “The either hated us with a passion or if they got it, it was because they came from a family like that.

“When I saw the reviews I decided to change the tone from looking at how crazy my family is to this is all our families. By the end of the season, because of the new attitude, the relatablity, people who said we were going to be cancelled instantly, those same critics were saying this is one of the best shows of the season.”

At the show’s center is the youthful Adam (Sean Giambrone), about 12 years old and a would-be Spielberg, constantly taking videos of his family’s shenanigans. That’s something the real Adam did — and was the key to selling the series.

“I always knew I had this bullet in my chamber, the crazy family home videos. I didn’t know what to do with them. I also had a lot of funny stories I used to tell in the writers’ rooms.”

Dad really did drop trou when he came, calling pants, “the corporate oppressors of his balls.”

Goldberg was encouraged by a producer at “Breaking In,” his previous series, who told him, “Dude, this is a TV show. We have to do this.”

But it wasn’t until he became a father himself that Goldberg got a handle on how to do it. It was then that he discovered you could raise kids “without screaming and calling them morons and not being overbearing. It gave me a different perspective to do a ‘Wonder Years’ in the ‘80s type show.”

There was no resistance to giving the show a Jewish-sounding title. In fact, given what it was originally called — “How the F***| Am I Normal?” — “The Goldbergs” must have come as a relief to network execs.

Ironically, there has not been much Jewish content to the show. “I hear that a lot,” Goldberg said. “But I totally disagree. Beverly being a yenta. We use that term every episode. Adam calling someone a putz. For me it was about the food. When they’re eating something it’s a bagel and lox or hamantashen.

Still, Goldberg suggests that might change. In the short term, the movie geek is more interested in arranging Ferris Bueller or Goonies-themed shows. But, he adds, “We might end up doing a Hanukkah episode. I’d love to do a bar mitzvah episode for Adam.”

Growing up, his family were what Golderg called “holiday Jews.” He attended Hebrew school and was a bar mitzvah at the famed Beth Sholom synagogue in suburban Philadelphia. He invited the two Stevens, Spielberg, after whom the even was themed, and King.

Spielberg had someone send articles about him. But King wrote back on the response card, “Make your parents proud and keep up the writing.” “I have it framed on my desk,” Goldberg said. “It was one of the best days of my life.”

‘The Goldbergs’ Were Even Crazier in Real Life