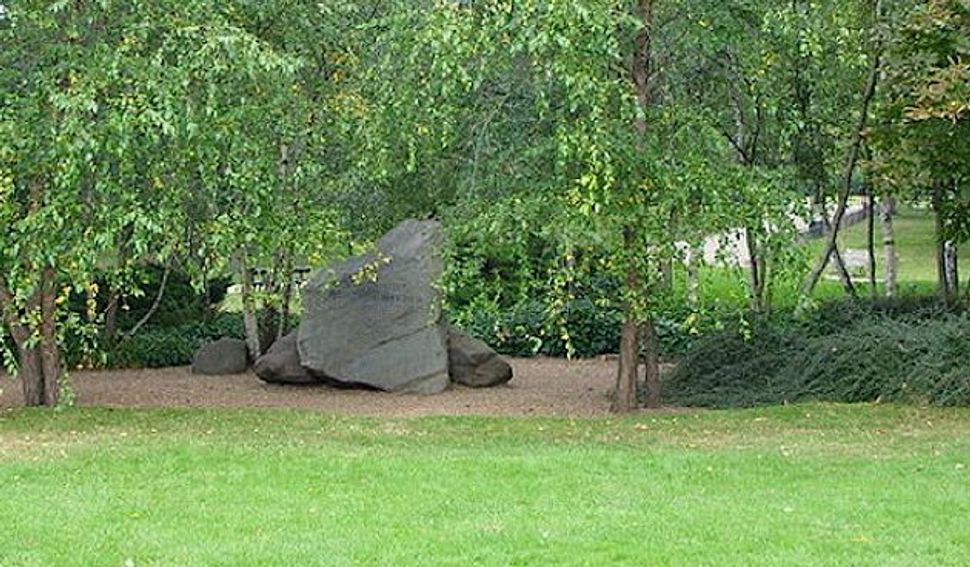 Britain needs a new Holocaust memorial. This is the principal conclusion of Prime Minister David Cameron’s Holocaust Commission. Publishing its findings on International Holocaust Memorial Day, it concluded that a new monument would “serve as the focal point of national commemoration of the Holocaust” and “make a bold statement about the importance Britain places on preserving the memory of the Holocaust.” It should be “co-located with a world-class Learning Centre,” one that would become a hub for Holocaust education nationally.

In London, there are already two Holocaust memorials. The first was opened in Hyde Park in 1983, and consists of two large boulders lying in a gravel bed, inscribed, “For these I weep. Streams of tears flow from my eyes because of the destruction of my people.” It is so discreet and non-descript that few know of its existence — I did not know of it until I read the Holocaust Commission report. The other, located at Liverpool Street Station, relates to the Kindertransport and was unveiled in 2006.

The Holocaust Commission concluded that neither of these are satisfactory. The Hyde Park memorial in particular was deemed uninformative, unrepresentative and isolated. A new memorial should be “striking” and “prominent,” as well as respectful, interactive, and educational. It should also encompass the Holocaust in full, noting the essential Jewish centrality of the catastrophe while not forgetting the suffering of other minorities under the Nazi regime.

The Commission was particularly taken by the New England Holocaust Memorial in Boston — six glass towers that visitors have the ability to walk through and interact with. “This design was rich in information, fitted well into the surrounding area and successfully managed to balance reflecting on the victims of other Nazi persecution without undermining the centrality of the Holocaust.”

If the government is serious about making a “bold statement” about the importance of Holocaust remembrance, the main problem will be finding the appropriate space and location in a city that is already quite compact. One of the reasons Berlin’s Memorial to the Murdered Jews of Europe is so affecting is its placement, spread out over a whole city block, near to institutions of power and grandeur: the Reichstag, the Brandenburg Gate, and the American embassy.

Aside from the Imperial War Museum (IWM), two central London locations on the Thames have been suggested by the Holocaust Commission: one at the Millbank complex, between MI5 and Tate Britain; the other at Potters Fields, next to City Hall and Tower Bridge, across from the Tower of London. While neither are ideal, and even considering the enthusiasm of Millbank’s owners to have the memorial there, the monument would have greater prominence at Potters Fields, if it can be aesthetically incorporated into ongoing developments in that area.

As for the learning center, to justify its existence it would have to do two things. First and foremost, if the main purpose of any memorial is keeping the memory of the event alive for future generations, it should be tasked with completing the work of preserving audio-visually the testimonies of British survivors of the Holocaust. Not only are British Holocaust survivors a neglected area of historical study, but first-person testimonies remain the most effective way of transmitting the story of the Holocaust to those that have not heard it.

Second, while the monument itself should be universal, the learning center should be more parochial, examining Britain’s role in the Holocaust in much the same way that museums in Paris, Copenhagen and Skopje look at their own national experiences. After all, London already has a world-class Holocaust exhibition, located at the IWM. While much smaller in scale than Yad Vashem, the United States Holocaust Memorial Museum, or the Topography of Terror in Berlin, it conveys the process of systematic ostracization, persecution and extermination just as comprehensively and effectively.

Looking beyond the Kindertransport or the liberation of Bergen-Belsen, which British Holocaust narratives tend to fall back on, any new learning resource has to address, for instance, the restrictions on emigration from Nazi Germany that were implemented in the lead up to and during the Second World War, including into Palestine. It should explain that those German Jewish refugees who did manage to get into Britain during the War were placed in interment camps. It should examine British anti-Semitism in the 1930s, the consequences of British appeasement, sympathy and support for Nazism amongst the ruling class, what the Allied Powers knew about the Final Solution, and why no action was undertaken to halt its execution.

Britain has needed such a thorough examination of its own historical record for some time. If a new Holocaust memorial and learning center can be the forum for such an autopsy, it will be welcome not only as an addition to London’s face, but its soul as well.