11 Jewish Things To Watch For at the Grammys 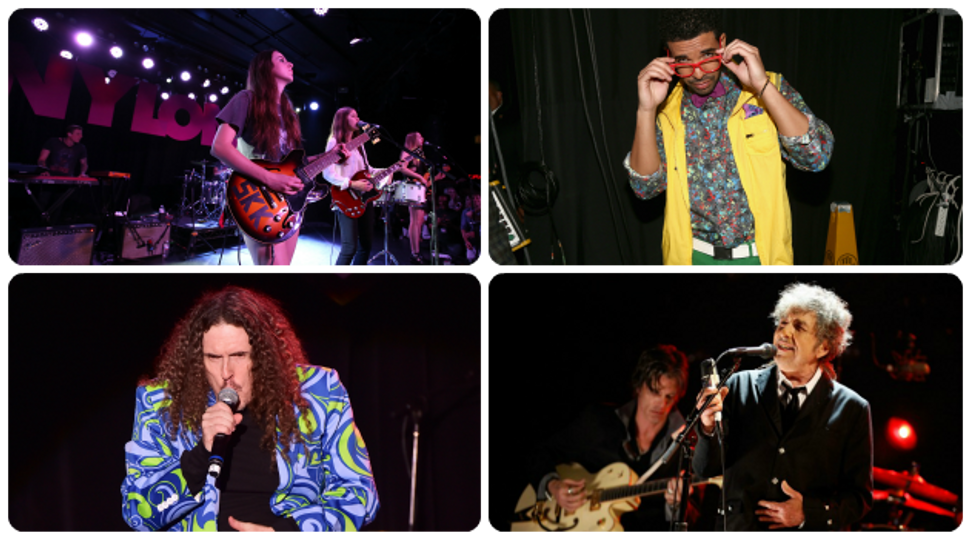 From those working behind the scenes in recording studios to stars performing on international stages in the spotlight, The Chosen People helped make 2014 a great year for music. Jewish composers, producers, and performers—current and classic—are all nominated for the most prestigious award in music, so here are 11 Jewish things to look out for during The 57th annual Grammy Awards, which air at 8 p.m. (EST) on CBS.

Famed Producer Rick Rubin has worked with the biggest names in music — from Johnny Cash to Jay-Z — over the course of his three-decade-long career. Last year, Rubin and his voluminous beard produced British pop singer Ed Sheeran’s “x,” which is nominated for Album of the Year and Best Pop Vocal Album.

These three sisters, all in their 20s, grew up in a musical family in Greater Los Angeles. The daughters of an Israeli father and mother of Polish descent, HAIM initially thought about calling themselves The Bagel Bitches. No longer playing for matzoh ball soup in Hollywood delis (true story), the pop rock, harmony-filled trio is nominated for Best New Artist based off the success of their debut album “Days Are Gone.”

Everyone knows that Jews run the comedy world, but it’s easy to forget to comedy albums are also included in the Grammy Awards. Two out of five of the nominees for Best Comedy Album are members of the tribe — sardonic stand-up Louis C.K. for “Oh My God” [edit: we know that he isn’t a practicing Jew, but he is of Hungarian-Mexican Jewish decent, so we’re including him here], and socially aware satirist Sarah Silverman for “We Are Miracles.” Musical parody wizard “Weird Al” Yankovic, who despite his name and the fact that he sings “Pretty Fly (For A Rabbi)” is not actually Jewish, is nominated for “Mandatory Fun.”

Another Jewish comedian makes the list, but this time in the Best Metal Performance category. Actor, guitarist, singer, and producer Jack Black serves as one half of the comic-metal duo Tenacious D and the band covered Ronnie James Dio’s “The Last In Line” for the This Is Your Life compilation. All proceeds from the album are dedicated to the late metal guitarist’s Stand Up and Shout Cancer Fund.

While this category probably won’t get much attention during the live broadcast, it’s important to recognize how much Jews have contributed to the history of musical theater. This year’s nominations for Best Musical Theater Album include “Aladdin” (which includes Jewish composer Alan Menken), “Beautiful: The Carole King Musical” (which features King herself as composer and lyricist), and the revival of “West Side Story” (which was composed originally by the late Leonard Bernstein with lyrics by Stephen Sondheim).

While this alt-rock hero has been cagey in regard to his spiritual leanings, Beck told Spin magazine back in 2008 that he was “raised celebrating Jewish holidays and considers himself Jewish.” Beck is nominated in four categories this year: Album of the Year and Best Rock Album for Morning Phase, as well as Best Rock Performance and Best Rock Song for “Blue Moon.”

Everyone’s favorite black, Canadian, Jewish rapper (yes, his mother is Jewish) is nominated in four different categories: Best Rap Performance and Best Rap Song for “0 to 100,” Best Rap/Sung Collaboration as the featured artist on ILoveMakonnen’s “Tuesday,” and Album of the year as a featured artist on Beyoncé’s Beyoncé.

Robert Zimmerman, more commonly known as famed folk troubadour Bob Dylan, will be honored as the MusiCares Person of the Year during this year’s show. While Dylan’s current relationship with Judaism is often questioned, his roots can’t be denied.

Madonna will be performing during this year’s ceremony to promote her forthcoming LP Rebel Heart. Since her 1997 introduction to Kabbalah, the ancient Jewish mysticism, the controversial pop star has been known include Kabbalistic imagery during shows.

11 Jewish Things To Watch For at the Grammys