A Spice Box Fit for a Pope 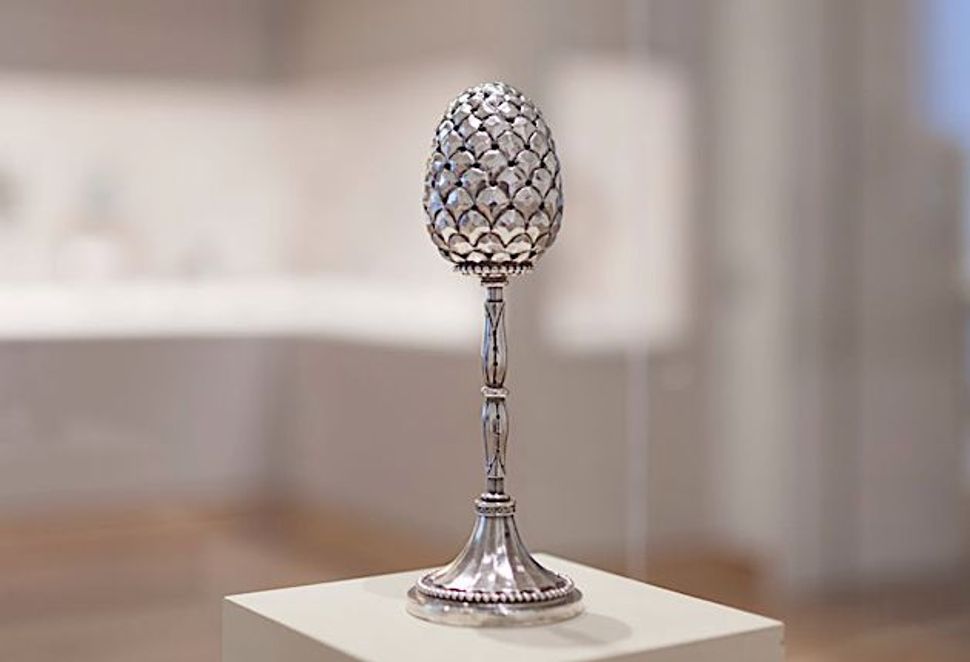 Part of the Havdalah ritual, which bids adieu to the departing Sabbath, recognizes the divine separator between sacred and profane, light and darkness, Israel and the nations, and the seventh day and weekdays. The second to last distinction is deemphasized in a unique Jewish circa-1800 spice box currently on view at the Minneapolis Institute of Arts.

A recent museum acquisition, the box was created between 1798 and 1810 by Giovacchino Belli (1756-1822), then Rome’s leading silversmith who typically worked for Pope Pius VII and for aristocrats. (The artist’s work is also represented in the collections of the Metropolitan Museum of Art and the Cooper Hewitt, and includes other Jewish content.)

A few months after acquiring the box, Eike Schmidt, James Ford Bell curator of decorative arts and sculpture, saw another work by the artist: a travel pyxis, or receptacle which holds the consecrated host in Catholic services, in an auction catalog. Making a pair was a no-brainer.

“To my knowledge, we’re the only museum in the country that has two major works by the same silversmith for two different world religions,” he said. And the two — both of which are receptacles of organic material used in religious services — offer interesting comparisons and contrasts.

For a Roman artist of Belli’s reputation and skill to work for the Jewish community was “highly unusual,” Schmidt said, and indicative of changes which Napoleon, who captured Rome in 1798, ushered in. The previous pope had been very tough on Rome’s Jewish community, which had five synagogues at the time, but Napoleon supported religious freedoms, including for Jews.

Pius VII was also comparatively good to the Jewish community, but Jews remained barred from artist guilds, so the unknown patron or patrons of the Havdalah box had to commission a silversmith outside of the Jewish community. (Schmidt notes the Italian exception of Turin, which allowed Jews into silversmithing guilds in the 18th Century.)

This box reflects a neoclassical style of silverwork and its beautiful form — reflecting the Roman symbol of the pinecone — suggests its patron or patrons had deep pockets. “This is like hiring a star architect today to build a synagogue,” Schmidt said. “What is so remarkable about this one is that there is a true, new aesthetic innovation as to merging the specific function within the Havdalah service with the most modern aesthetic forms of neoclassicism.”

There must have been, Schmidt said, a true dialogue between the artist, with his background in neoclassical imagery, and the patron or patrons, who likely consulted a rabbi.

“It’s quite remarkable how well this responds to the actual needs and meaning of the service,” he said. And neoclassical forms, then popular in Italy, France, and the new United States, “were associated with the ideals of religious freedom of the time.”

“The patron did not just want to repeat an old object but was really fascinated by the new forms that surrounded him.”

Keith Williams, chair of the art department at Concordia University in St. Paul, Minnesota, hasn’t had a chance to see the spice box in person yet. But Williams, who teaches courses on 18th- and 19th-century art and design, agrees that Belli had a stellar reputation.

“Belli was very, very well respected in his time in Rome” with a “top notch” reputation, he said. “In terms of quality, he would rank among the highest, if not the very highest of silversmiths working in Rome at the time. He was a highly revered craftsman.”

Stylistically, Williams agrees that Belli was quite innovative, and whereas his father had worked in the Baroque and Rococo styles, Belli mastered Neoclassicism “quickly to establish himself as not only a master, but someone on top of the stylistic demands of the day.”

“His work was, at the same time, contemporary and classic,” Williams said.

A Spice Box Fit for a Pope