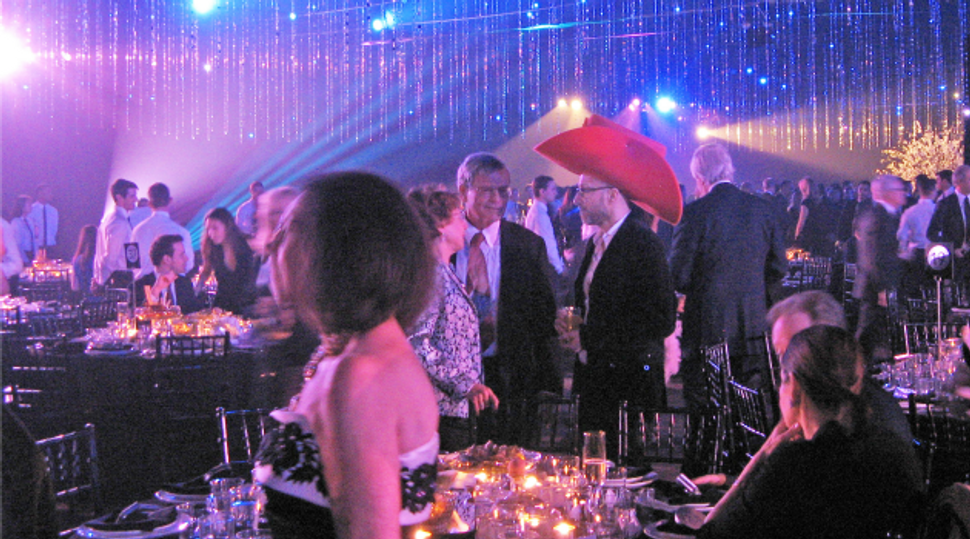 Sparkling and irreverent does not begin to describe the Jewish Museum’s 29th Annual Purim Ball at which more than 700 guests — with credentials in the arts, fashion, philanthropy and entertainment — mingled at the Armory which was decorated with thousands of bathed-in-purple light shimmering miniature mirrors suspended overhead…helped raise $2 million.

Introduced by Gould as “The Larry David of the art world [who] brings art history, Jewish history and his very, very unique sense of humor to the Purimspiel,” Saltz launched his spin with: “Hello Jew New York! or Boca Raton!, Scarsdale and Mamaroneck in the house! …Haifa! Happy Purim Jews and not Jews…We start with King Ahatzurus of 5th century Persia [a blow up photo of Donald Trump on a large screen] who 50 years ago tore down the Fontainebleau in Jerusalem [alternating photo montages of Koch Brothers, Herman Cain and others on screen].

“The king is married to Queen Vashti” — [Sarah Palin] as onscreen pictures ran the gamut from an unclad Cher to a Kardashian derriere and, among others, Liz Taylor. “The king summons his wife] Vashti. She refused; she had a headache — a Jewish American princess — [oddly she’s not Jewish!]. They kill her. The king needs new wife. Enter Mordechai, a kind of Jewish busybody… activist….Isaac Mizrahi [a guest at the ball] speculated he might have been a gay designer… Esther wins the contest — it is the first intermarriage. Just think about it — the Queen of Persia being a Jew. Mordechai, dressed as Dame Edna, Haman (graggers!!!) suffered from speckle shmekel syndrome [Yiddish euphemism for the male member with accompanying medieval naked male organ images]. The king realizes that Haman is a scum anti-Semite…Esther tells the king she and Mordechai are Jewish…. Jews want the right to defend themselves. America arms the Jews, gives them weapons and the Six-Day War basically took place and the Jews won and that’s the reason you are here today and not enslaved.” During our light-hearted dinner chat, Saltz told me that his grandparents came from Estonia and that before this event he had never heard of Purim.

Among the evening’s masks, my favorites were the couple I dubbed “the cabbage heads.” More than 500 — mostly young — revelers were at the After Party.