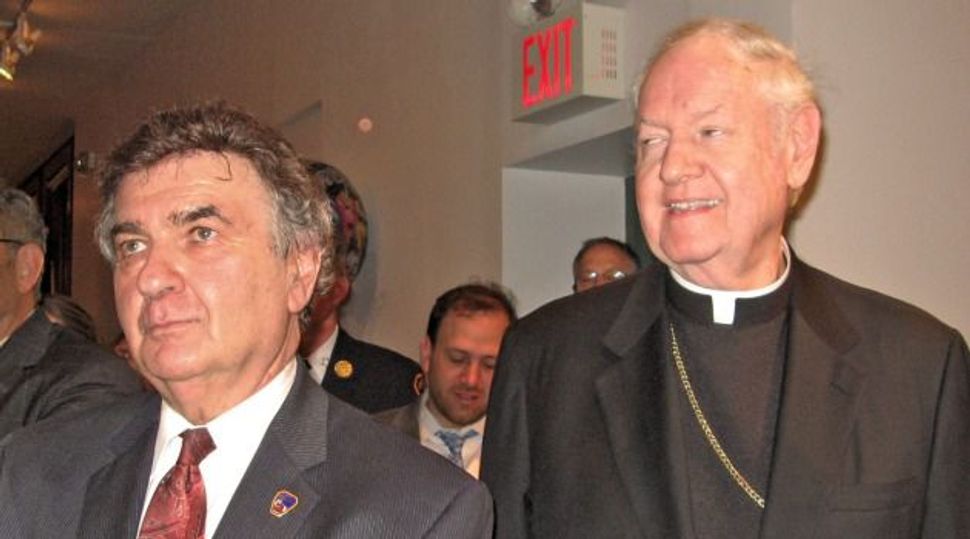 Cardinal Edward Egan — who died on March 5 at 82 of cardiac arrest — was a frequent welcome presence at Jewish-related events. My last chat with him was at the December 19, 2012 “Vodka and Latke” celebration honoring Rabbi Joseph Potasnik’s “Special Birthday” [his 65th] held at the New York City Fire Museum. Addressing a political who’s who dense crowd that included Mayor Ed Koch, Peter Vallone, Manhattan Borough President Scott Stringer and Brooklyn Borough President **Marty Markowitz,” the Cardinal who had been the 9th Archbishop of New York, offered his “Mazel Tov” then lauded Potasnik for his help in organizing the 9/11 Tribute at Yankee Stadium.

At the July 17, 2007 party for Israel’s then departing consul general Arye Mekel, an event hosted jointly by UJA-Federation of New York and the Jewish Community Relations Council, Cardinal Egan pointed to Mekel and declared: “You call yourself an Israeli! We call you a New Yorker!. You had two and a half million Jews to take care of and I have two and a half million Catholics to take care of.” After the laughter subsided, the Cardinal informed: “ I know a little Hebrew, the beautiful language of Moses and David. Learned it in a seminary in Rome, taught by a Croatian in Latin from a German textbook!”

Spotting Ruth Mekel in the crowd, Cardinal Egan joshed: “The wife is more important” then went over and kissed her on the cheek. A cool Mekel had the assemblage roaring with his aside: “And the Cardinal knows about kissing wives!”

Unable to attend the September 6, 2006 opening of “A Blessing to One Another–Pope John Paul & The Jewish People”–an inspiring exhibit at the Museum of Jewish Heritage —  the Cardinal made sure he was represented by Vicar General Bishop Roger Brucato.

Whatever the event, whenever I met him, he was ever gracious, smiling and, remarkably, remembered what paper I wrote for.

Perhaps my most searing memory relates to the September 9, 2001 ceremony at the corner of Lexington Avenue at 54th street where 1000 congregants of Central Synagogue were gathered for a rededication ceremony on the occasion of the rebuilding of the sanctuary following a devastating fire. Among the notables that day: N.Y. Governor George Pataki, N.Y. Mayor Rudolph Giuliani,and NYC Fire Chief Peter Ganci who had rushed into the synagogue and helped Rabbi Peter Rubenstein save the synagogue’s Torahs during the conflagration and were being re-dedicated that day and returned to their place in the synagogue.

Two days later Chief Ganci would heroically perish in the 9/11 Towers attack — a tragedy to which Cardinal Egan would often refer to at subsequent occasions.