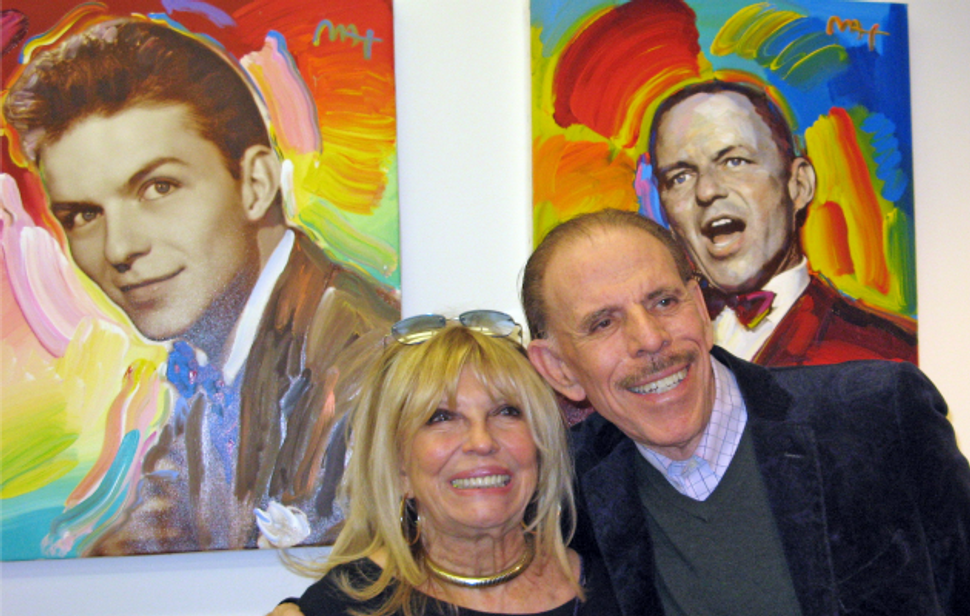 The Peter Max March 2 opening night private reception for his “Peter Max Paints Sinatra” extravaganza was wall-to-wall and shoulder-to-hip-with celebrities, friends, admirers and Max collectors. Among the evening’s eye-catching beauties and “names” — Tony Danza,, Steven Van Zandt, Elaine Sargent and several Russian-accented stunners. When I told 74-year-old (and still fabulous) Nancy Sinatra — there with her daughter Amanda Erlinger —  that whenever I put on a pair of boots I heard “in my head” her iconic rendition of “My Boots are Made for Walking,” I got a look and someone nearby began to hum the theme.

The event marked the launch of Max’s series of 27 portraits of Frank Sinatra on the occasion of the Frank Sinatra Centennial “Sinatra: An American Icon” curated by the GRAMMY Museum at L.A. LIVE, in collaboration with The New York Public Library for the Performing Arts and the Sinatra Family.

As Karen and I mingled, sipped Perrier and waved at familiar faces. we noticed several Sinatra canvases –each reputedly valued at nearly $50,000 — being maneuvered twixt guests and Max for photo ops. Beleaguered by fans, friends, I was only able to have a quick chat with Peter who — for part of the evening — held court sitting on a sofa next to PR Maven R. Couri Hay.

I had first met Peter Max at a 1960’s American Bookseller’s Convention in Washington, D.C. at which he was autographing psychedelic posters. In1989, at Brown’s Hotel in the Catskills, I met his father — Jacob Finkelstein — who introduced me to the family’s amazing survival saga. Fleeing Warsaw to Berlin where they had been hidden by Christians, the family fled via Italy to Shanghai with 7 months old Peter. Max–an honoree at a Pratt Institute Black Tie event a few years ago– told me: “Those were the nicest ten year of my life.” In 1950, with the rise of Communism, the family fled to Israel, and then came to the U.S.

In July 16, 1997 Lea Rabin — in town to raise funds for the Yitzhak Rabin Centre in Israel — visited his studio and admired his “36 Rabins” several of which were exhibited at a UJA-Federation gala at the Waldorf-Astoria.

Max was also commissioned by President Clinton to paint the historic signing of the Peace Accord between Rabin and Yasser Arafat. The official artist for “Jerusalem 3000” Max told me during an interview at the Metropolitan Museum of Art: “I did 32 Martin Luther Kings, 40 Gorby’s [Gorbachev], 50 Trumans, 108 Dalmatians, 200 Clintons — Goofy, Mickey Mouse and — [in 1996] was working on Hillary.” Sinatra is in good company.